Our children should be judged on their merits not their race. The race based admission practices at Harvard that limit the amount of Asian American students admitted stand in stark contrast to our values. This backwards policy must end.

Meet Young Kim, the Republican candidate for California’s 39th Congressional District in the recent midterm elections. She’s not your run-of-the-mill GOP candidate: she’s a woman, Korean American, and an immigrant. Had she won, she would have been the first Korean American woman in Congress. A former state legislator, she introduced a resolution supporting the anti-affirmative action lawsuit against Harvard in April 2015. The resolution states bluntly, “Harvard University, one of the nation’s oldest, most prestigious postsecondary educational institutions, employs unconstitutional race-based admissions policies that disadvantage Asian American student applicants.”

Kim is a fascinating candidate because she represents the convergence of two different trends that have arisen over the 2018 midterm election cycle: the increasing prominence of the Asian American right, as well as the trend of GOP candidates capitalizing on the affirmative action debate. Indeed, Kim is just one of several candidates who, in the latest election cycle, have made use of affirmative action to court Asian American voters. Take Mimi Walters, for example, who ran as the Republican candidate in California’s 45th Congressional District. In an effort to maintain her Orange County seat, Walters made affirmation action one of her top talking points. In September, her campaign began distributing mailers featuring a grim-looking Asian American woman alongside a quote from Walters herself: “Discrimination in higher education is wrong.” 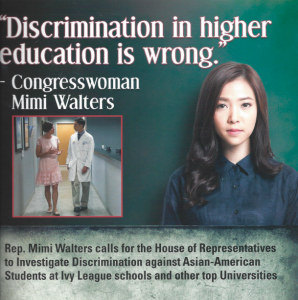 On the back of the mailer, Walters lists four Asian American politicians who have allegedly endorsed her fight against affirmative action: Senator Janet Nguyen, Senator Ling Ling Chang, Assemblyman Steven Choi, and Assemblyman Phillip Chen. There is absolutely no doubt about the message Walters was trying to send out with this mailer: Walters is anti-affirmative action, and therefore, Walters is a friend of the Asian community.

Another GOP candidate, Corey Stewart, had a similar idea regarding mailers. Stewart, the Republican candidate for the Senate from Virginia, sent out a mailer with strikingly similar anti-affirmative action rhetoric: “Data shows that Asian-American students must score 140 to 450 points higher on the SAT to get into the same college or university as students of other races. Corey Stewart has pledged to stop these racist admissions policies.” The bottom of the mailer has a photo of Stewart looking pensive, superimposed over an image of Asian American protestors holding signs that say “Support Race Neutral Admissions.” What stands out about the flyer, however, isn’t just the subpar photoshopping: it’s the fact that the flyer includes text in three different languages—English, Mandarin and Vietnamese. 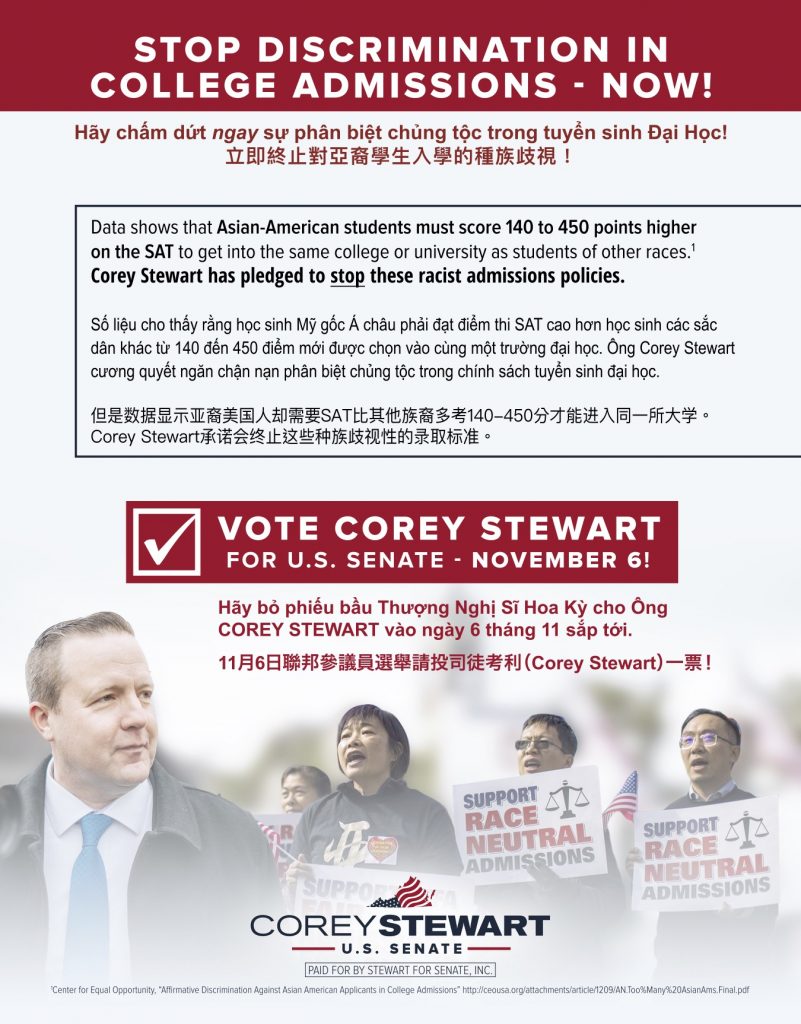 “Some Republicans are afraid to talk about it because it’s got a racial element to it,” the Wall Street Journal quotes Stewart as saying. “But they shouldn’t be, because it resonates.”

To qualify these statistics, the increase/decrease in each party’s favorability ratings by Asian American voters are indeed relatively small in the grand scheme of things; nonetheless, they do indicate the fact that more Asian Americans are shifting their political leanings rightward, and affirmative action is undoubtedly one factor that has resulted in this shift.  The question, then, is why: why has affirmative action been an issue that GOP candidates have chosen to capitalize on, and why have Asian American voters, to some extent, responded favorably?

The answer to the first question is probably fairly obvious: because anti-affirmative action rhetoric falls squarely in line with typical Republican values. As the 2012 RNC platform states: “We support efforts to help low-income individuals get a fair chance based on their potential and individual merit; but we reject preferences, quotas, and set-asides, as the best or sole methods through which fairness can be achieved, whether in government, education or corporate boardrooms… Merit, ability, aptitude, and results should be the factors that determine advancement in our society.” The Republican party has for a long time been generally opposed to affirmative action, and with the highly publicized Harvard University admissions trial making headlines across the country this year, it’s no surprise that affirmative action would become a key issue in the 2018 midterm elections.

More strategically, though, the emphasis on affirmative action—and, by extension, the emphasis on Asian American voters—is a result of the GOP’s recognition of Asian Americans as a key voting demographic. Asian Americans are the fastest growing racial group in America today—but they also have one of the lowest voting rates of any racial group in America, with only 49 percent of eligible voters in 2016, compared to 65 percent among white people and 60 percent among black people. Add that to the fact that 40 percent of Asian Americans don’t favor either party, and it’s easy to see why the GOP has decided to double down on their Asian American voter offensive, with affirmative action naturally becoming one of their greatest tools.

This has been reflected in the recent influx of anti-affirmative action activist groups whose leaderships comprise primarily of Chinese American. In Mimi Walters’s district, for instance, a group of Chinese Americans formed a group called the Orange Club to oppose race-based preferences when, in 2014, California weighed a constitutional amendment that would have reintroduced race-based college admissions. George Li, the group’s president and a Republican, is quoted as saying, “Our group doesn’t claim to be party-affiliated. But it’s like almost every Democrat supports forms of race discrimination.”