The Harvard admissions lawsuit may be the final challenge to end affirmative action as it exists today. In November 2014, Students for Fair Admissions (SFFA) filed a lawsuit against Harvard University alleging that their undergraduate admissions practices are unconstitutional. The plaintiffs claim that Harvard’s affirmative action admissions policies violate the Civil Rights Act such that Asian American applicants are racially and ethnically discriminated against causing systematic underrepresentation in Harvard’s incoming freshmen classes. 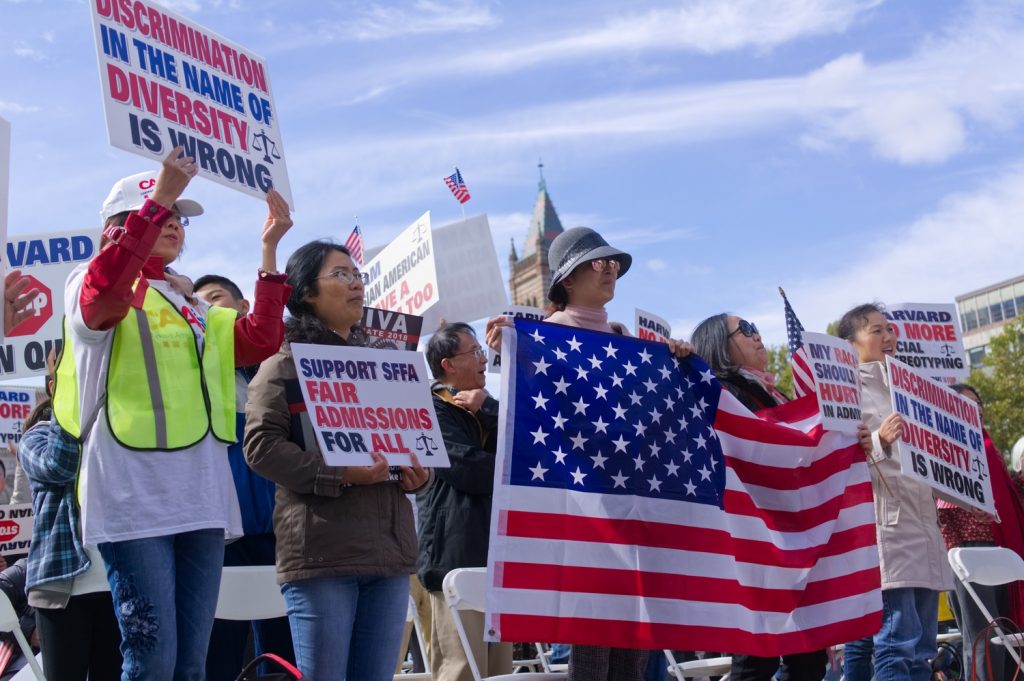 SFFA members at a rally on Harvard’s campus (The Crimson)

According to their website, their mission is to “support and participate in litigation that will restore the original principles of our nation’s civil rights movement: a student’s race and ethnicity should not be factors that either harm or help that student to gain admission to a competitive university.” This nonprofit membership group represents more than 20,000 individuals including students and parents who hope to remove all race consideration from university and college applications. SFFA argue that race must be completely omitted from the college applications in order to truly be nondiscriminatory and constitutional. In the trial, they demanded that Harvard release thousands of admissions files to support their claim that there exists a pattern of discrimination against Asian American students in the undergraduate admissions process. 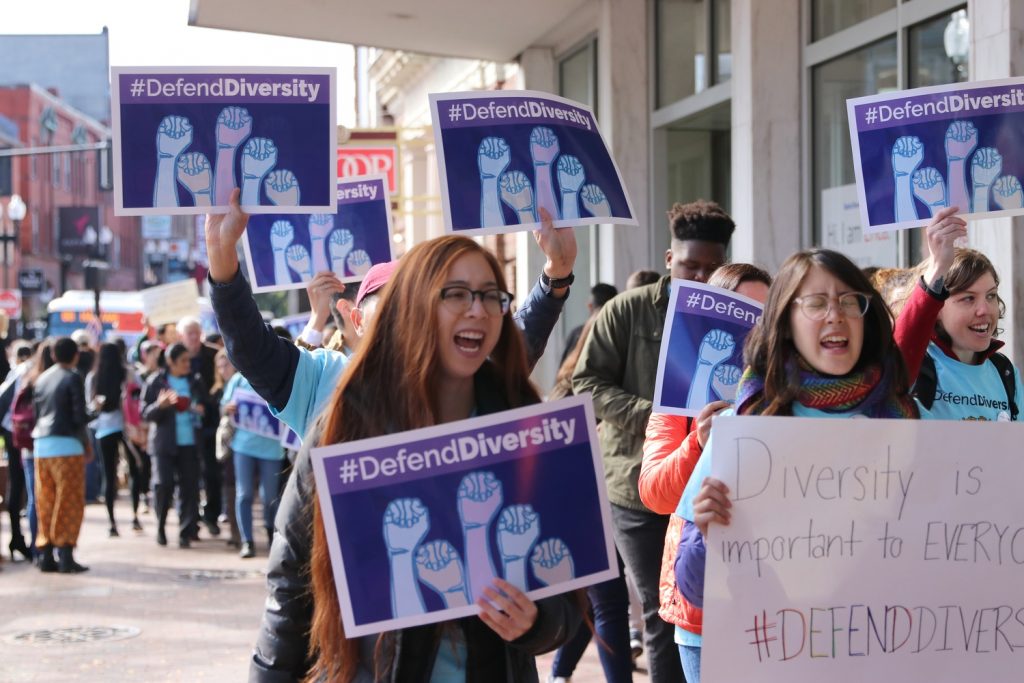 Harvard students at rally before the trial began (The Crimson)

In response, Harvard has firmly stood in support of their admissions process stating that their holistic review is critical in creating a diverse student body. Harvard has combatted any claims that this process discriminates against Asian-American students in their public statements as well in their testimony from administrators, professors, students, and alumni throughout the trial.

The fifteen-day trial with the presiding U.S. District Court Judge Allison Burroughs ended early November 2018. With no jury, the decision rests in the hands of Judge Burroughs and is expected to be released in early 2019. However, both SFFA and Harvard are planning to appeal meaning this case is likely to end up in the Supreme Court. 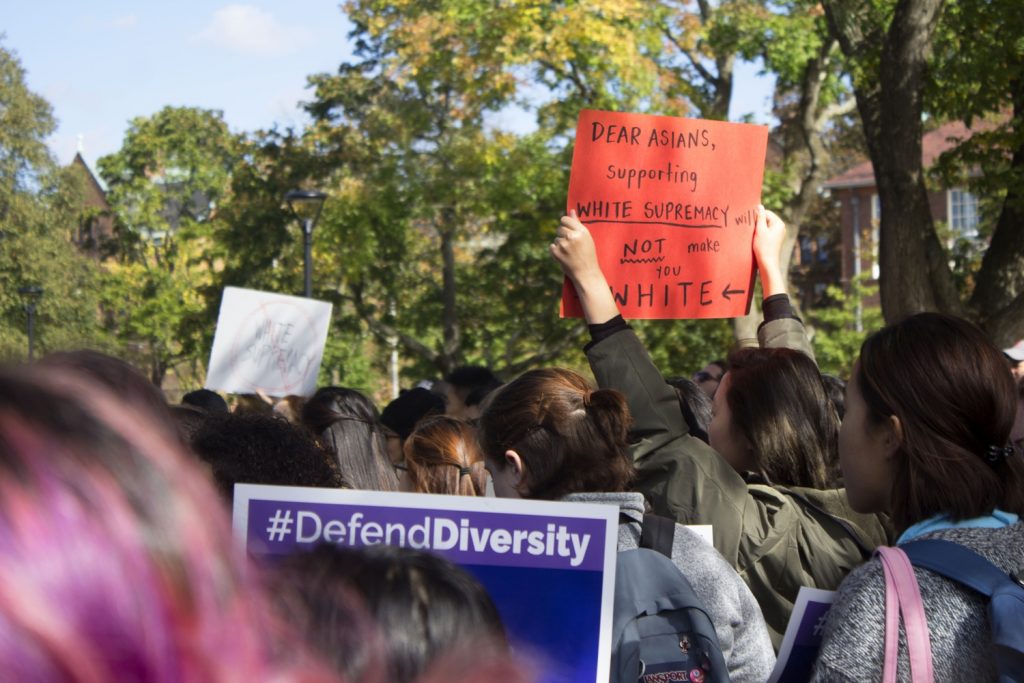 Signs at a rally on Harvard’s campus

This trial has raised complicated questions within academic communities about affirmative action and academic merit in college admissions. Likewise, there is a lot to unpack regarding the SFFA v Harvard case: the historic reasons for affirmative action, the future implications of the trial if affirmative action is dismantled, the national debate within the Asian American community and other communities of color, the use of the collective “Asian-American” in terms of underrepresented South Asian populations, and the use of Asian bodies in white conservative political agendas, in this case, led by Edward Blum, the president of SFFA. Considering those other issues, this discussion will focus on the campus climate at Harvard before, during, and after the trial, including the press releases from the administration, admissions officers, and student organizers.

In an e-mail to the Harvard community a week before the trial began, Lawrence S. Bacow, the president of the university, writes “Let me be unequivocal: The College’s admissions process does not discriminate against anybody. I am confident the evidence presented at trial will establish that fact.” As the head of the administration, there is pressure to have Bacow’s public declaration be firm and resolute against any claim of misconduct. This trial is being intently watched on the national stage such that any recognition of offense would immediately spark controversy among those who believe in race-neutral alternatives and incite even more anti-affirmative action rhetoric.

The problem with this pressure to be absolute is that it erases any opportunity to participate in constructive discourse about Harvard’s released admissions files and data without contributing to the dismantling of affirmative action. Documents outlining the key points in reading applications defines an applicant’s personal rating as “truly outstanding qualities of character; student may display enormous courage in the face of seemingly insurmountable obstacles in life. Student may demonstrate a singular ability to lead or inspire those around them. Student may exhibit extraordinary concern or compassion for others. Student receives unqualified and unwavering support from their recommenders.” This rating is central to SFFA’s argument that Asian American applicants have consistently received lower personality rankings than other racial counterparts in efforts to contain Asian American acceptance rates.

Harvard has responded to these allegations by questioning the efficacy of statistical modeling of race and personal rating because of the presence of unobservable factors, further reiterating that there is no evidence of discrimination in the admissions process. 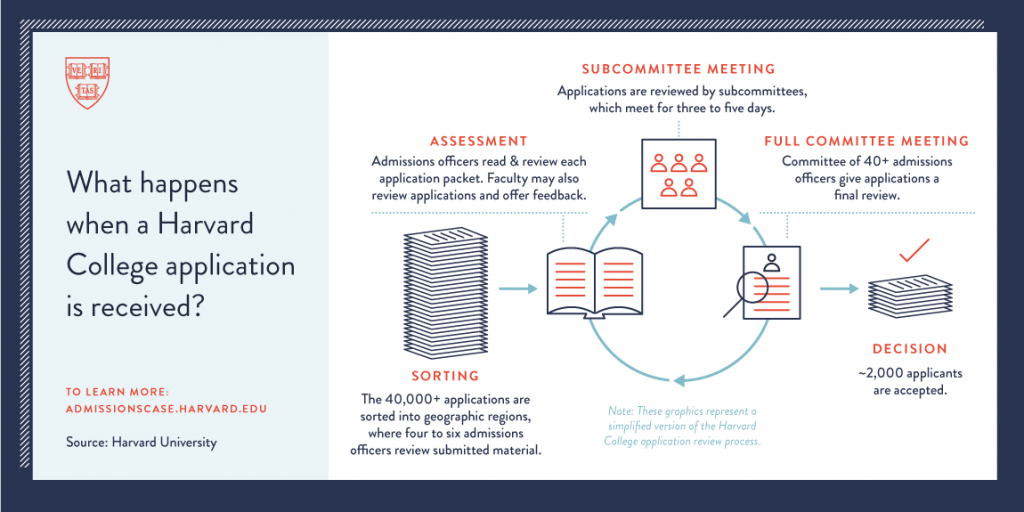 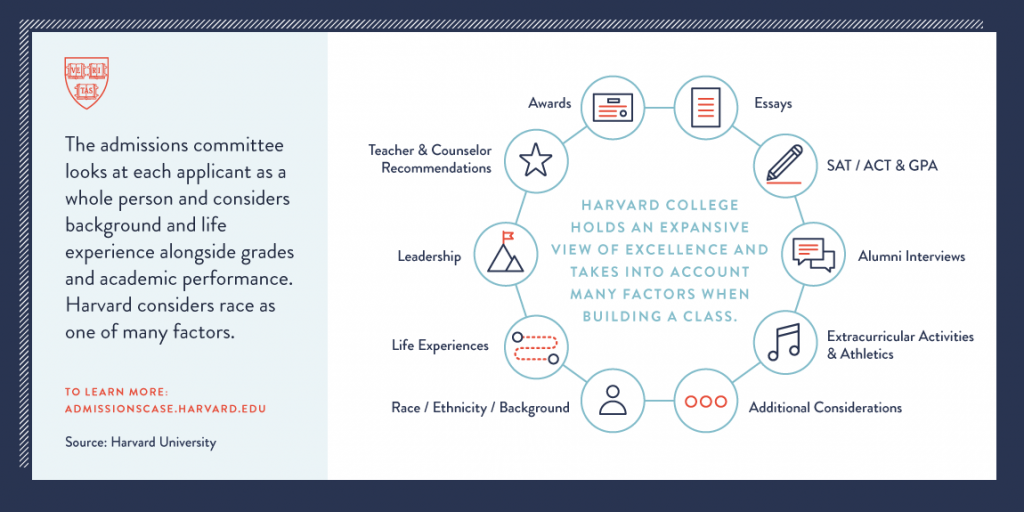 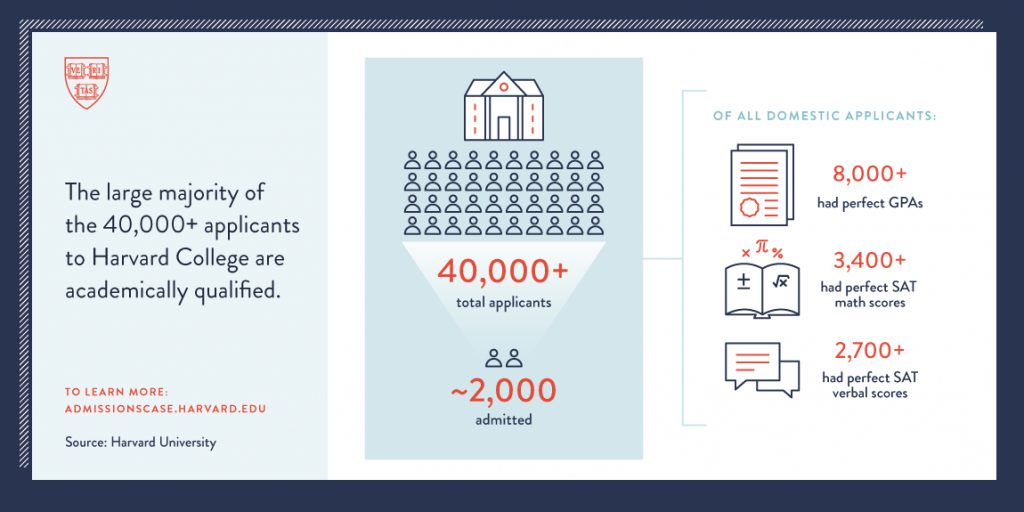 Action to ensure that this case does not gain the traction it needs to federally undermine affirmative action. These behaviors create a space where the problem of racial biases cannot be discussed constructively. Students and educators who are pro-affirmative action are pressured to claim that Harvard does not have systematic discriminatory history of low personal ratings for Asian American applicants in order to support the integrity of affirmative action. However, there should be a discussion and interrogation of how Asian American applicants are being examined and categorized during the admissions process. If Asian American students are being unfairly profiled during the admissions process, this issue is conflated with the race-neutral debate and is therefore, not considered an issue according to the administration.

In the current climate, any conversation surrounding racial bias is politicized into a race-neutral and affirmative action debate and overshadows other voices and issues. This is dangerous because it stifles constructive reflection and productive progress to support Asian American activism and diversity in education.

In addition to official statements from the administrators, there have been many press statements as well as testimonials from Harvard student groups and organizers that inform current campus climate. The Crimson is a student-run newspaper which has provided written and media information for student and public consumption in order to break down the trial and make the information easily accessible. Through a series of student-narrated videos, the Crimson gives an overview of the issues of the trial and a weekly update on what was discussed during the trial. As a companion to these videos, staff writers attended each day of the trial and wrote a bullet point summary of who was called to the witness stand and what was discussed including quotes. Through this key-points style of information exchange, the Crimson allows their audience to have a quick glance at the trail proceedings.

It is important to note that their information may only attract an already polarized audience. In their numerous op-eds about the trial, most are pro-affirmative action. Their individual stances on the trial and involved parties may differ, but the published stories have the overall tone in favor of Harvard. While the Crimson has clearly noted that these opinions are not necessarily shared among all their writers, either their editors are inclined to publish or writers are inclined to write pieces in support of affirmative action and Harvard as the leading student-run newspaper.

One of their articles profiles each of the students asked to be witnesses for the trial. Harvard chose 5 current undergraduate students to testify on behalf of the school because they believed that these selected students’ unredacted admissions files provide evidence against SFFA’s allegations against the university to support race-conscious admissions process. The students that represented Harvard were from varying racial and socioeconomic backgrounds, and their overlapping argument was the same: they all benefited from affirmative action which in turn, benefits the diverse population at the university. 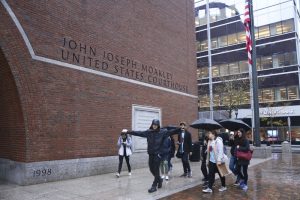 The witnesses carefully selected by Harvard had a job to represent how the school’s race-conscious admissions policy affected them. In only choosing five voices, inherently and perhaps intentionally, many were left out. The Asian-American students chosen boasted their immigrant stories with unredacted admissions files that have glowing personal ratings. The two other students of color that testified argued that if race was erased from their application and only their economic status was considered, they may not have been accepted and their impact on campus as a part of Black Students Association and Association of Black Harvard Women to support diversity wouldn’t be realized.

In a court case as high profile as SFFA v Harvard, Harvard has taken safe precautions to make sure their story is clear. However, much of this case revolves around middle class Asian Americans with high performing test scores and grades. These students and those stories were not heard from Harvard’s witnesses. In doing so, they have been complicit in using Asian-American bodies in addition to other POC bodies for their agenda and political gains, similar to the actions of which Edward Blum has been accused. Harvard has co-opted their stories of immigration and discrimination in order to further their defense and they must interrogate their role in this.

The Crimson has also provided visibility for student groups and organizers. There are many Asian American students groups that have come out in support of Harvard, the most active being the Coalition for a Diverse Harvard. Within the publication, pro-affirmative action student groups have been featured significantly more than pro-race-neutral groups, including SFFA. Most of the coverage on SFFA surrounds different rallies and is often most visible in the photo essays. 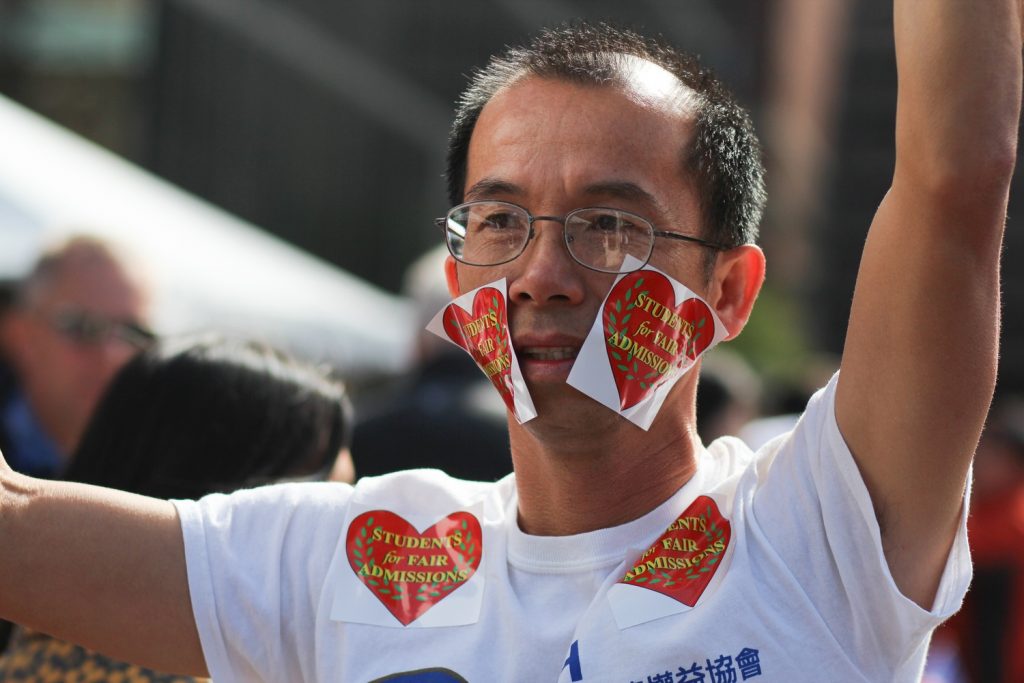 Man with SFFA stickers at rally

The Crimson’s focus on pro-affirmative action groups contributes to campus climate among Harvard students. Especially among Asian American student groups, there exists a great pressure that in order to be politically correct and affirm their position at Harvard, they must declare their support for Harvard. Not to say that all the student support at Harvard is ingenuine, but there is an unintentional pressure by the student media to, at least publicly, stand against SFFA. In doing so, the campus climate sets a scene where students, who may actually agree with SFFA’s claims, do not actively or outwardly express their opinions.

Historically, affirmative action has been challenged and upheld in different court cases throughout history. Edward Blum has been a constant player in these challenges. With the current lawsuit against Harvard, he has found a population of conservative Asian-Americans to rally behind him and SFFA. With the likely possibility that this case will end up facing a conservative-majority Supreme Court, it is critical that students, educators, and community members come together to work against the dismantling of affirmative action and other race-conscious policies. This case could mean a step back in diversity in support of white privilege. With such an important case taking stage on a high profile college campus, Harvard’s campus climate has influenced the administrative and admissions responses as well as spark student activism on campus among groups and organizers.