Asian American Women Artists Association (AAWAA) was founded in 1989 by Betty Kano, Flo Oy Wong, and Moira Rot to increase the visibility of Asian American women artists in the public sphere. It empowers women to present their narratives through art when they have historically been excluded from correct representation in mainstream art. Based in San Francisco, this non-profit organization has grown into a national creative arts community and a platform for a much needed conversation about AA identity.

AAWAA has increased exposure for Asian American women artists through various means, especially by educating the public and relevant art institutions about their contribution to art and their place in American art history. This organization has hosted exhibitions (usually following art workshops), created publications, distributed educational packets, initiated talks, given lectures, and implemented community programs throughout California. AAWAA has not only been directly providing access to art venues for women artists but has also been raising awareness about Asian American art to the general public. They provide both opportunities and resources for AAPI identifying women.

One of the most prominent programs done by AAWAA is called the “A Place of Her Own.” It is an arts-based healing project that centers around the question inspired by Virginia Woolf’s A Room of One’s Own: “If you had a place of your own, what would it be?” The program was created by Cynthia Tom, AAWAA’s curatorial director, in 2008. This project includes a guided workshop that encourages artists to use multi-disciplinary media to explore women’s issues. The open dialogue helps artists think critically about relevant Asian American and feminist issues whilst channeling their thoughts through art. “A Place of Her Own” allows free thinking through different creative art medium. The project eventually culminates into an exhibition of the artwork produced by the artists. So far, there has been eight exhibitions, including those in the SOMArts Cultural Center and the De Young Museum. The series of photos below are photos taken in the “A Place of Her Own” exhibition at the De Young Museum. They include artists working on their pieces and the process of producing such pieces. 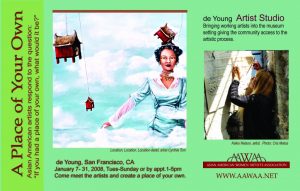 This is a poster for the “A Place of Your Own” Workshop Exhibition that took place in the De Young Museum on January 2008.

Aside from the proactive work that makes art institutions directly accessible to Asian American women, AAWAA is important simply for creating a space of communication. It creates an environment for artists across or along ethnic lines to interact and feel connected to one another. Creating a place that allows for a sense of community can pave way to activism. When women artists are sheltered from the public, they are sheltered from each other, too; in this sense, AAWAA is more than just an organization that pools resources and implements programs. It is a place that fosters a sense of community.

Asian American women artists are oftentimes dictated by certain societal roles and made invisible by the suppression of their art. AAWAA is a fight and a call for recognition, and it does so very effectively by interacting with the public in San Francisco. This organization emphasizes the need to increase the visibility of Asian American women artists when they aren’t allowed to speak culturally and are neglected from American art history. Their narratives, explained and expressed through art, finally find an outlet with the help of AAWAA.