The Asian American Writers’ Workshop embodies the creative expressions of Asian America. They are not apolitical; they are an activist organization. “We are against both an exclusive literary culture that believes that race does not exist and Asian American narratives that lead to self-stereotyping and limit the menu of our identity.” The AAWW gives a voice to a community of people who have been persistently marginalized and treated unequally by the systems and institutions relentlessly upheld by the dominant society. Nearly all literature seeks to tell the truth and the AAWW seems to do just that. The AAWW was founded in New York in 1991 as “a national non-for-profit arts organization devoted to the creating, publishing, developing, and disseminating of creative writing by Asian Americans.” The AAWW goes beyond producing creative writing; much like the goals of this digital exhibit, the AAWW exposes the silenced histories, past and present struggles, and contemporary experiences of Asian Americans. They do this through essays, interviews, fiction, poetry and art.

Through their base in New York, the AAWW also produces current news stories, including interviews pertaining to life in New York City. The AAWW does not only include journalists and writers, they also include projects from visual and performance artists. In addition, the AAWW includes many fieldworkers who cover more justice issues outside New York City as they come up. Their concerns are not limited to that of just Asian Americans, but of fighting racism abound in a global world. The AAWW stands in solidarity with other groups of marginalized people. 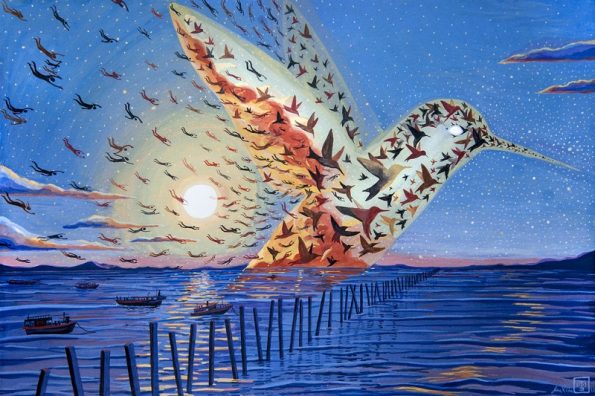 Jess X. Chen (Until We Are Free, Culturestrike)

The AAWW publishes their works through three main mediums- The Margins, Open City, and CultureStrike- all of which are available online. The Margins is the flagship editorial platform and broadly encompasses issues around the Asian American identity. It includes personal essays, interviews, fiction, and poetry. Open City involves contemporary and current news, stories, and interviews all regarding Asian American life in New York City. Though there are Asian American communities in New York City, they rarely appear in mainstream media. The Margins seeks to directly confront this issue. Finally, Culturestrike distinguishes itself in that it is the embodiment of a cultural movement including projects from visual and performance artists. Culturestrike seems to have a greater bent on their concerns for and coverage of immigration in the United States. The writers and artists from Culturestrike seem to be the most mobile as they travel to the locations that they are reporting on. The AAWW has sent writers and artists to tour the border in Arizona.