Asians4BlackLives began in Oakland, CA in late 2014 after the non-indictment of the police officer who killed Eric Garner, Daniel Pantaleo. It began as a response to a call to action from BlackLivesMatter organizations in the Bay Area, such as the BlackOut Collective and Black Brunch, and since its formation has spread across the country. A new generation of a long history of AAPI solidarity with Black movements, #Asians4BlackLives is a contemporary collective that organizes through hashtags, digital and social media, and existing networks in the AAPI community to increase accessibility and cross language and education barriers. As an organization based in AAPI solidarity with the BlackLivesMatter movement, its structure and goals are specifically aligned with BLM in order to fight anti-Blackness at every level and center Black folks and Black activism in the fight for liberation of Black people. 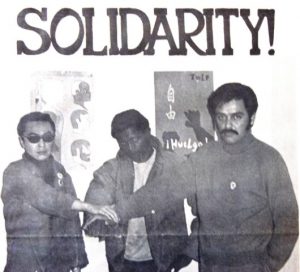 Image Description: Black and white photo of three people standing in a row with their hands on top of each other in solidarity. From left to right: Richard Aoki (Asian American Political Alliance), Charlie Brown (African American Student Union) and Manuel Delgado (Mexican American Student Confederation). Leaders of the 1968 strike by the Third World Liberation Front at San Francisco State University.

By recognizing that AAPI activism was greatly influenced by Black struggles for liberation, A4BL returns to the roots of the Asian American social formation and its debt to Black liberation movements. A4BL acknowledges the lasting political impact that Black Power and Civil Rights movements had on AAPI activists – AAPI organizations such as “Serve the People and Promote Revolution”, the Yellow Brotherhood, and Asian American Hardcore grew out of the radical political and cultural organizing by the Black Power movement and modeled organizing strategies of the Black Panthers. Asians for Black Lives names this history in their mission statement: “Black communities have paid dearly for resisting their own oppression, and in doing so, they have also paved the way for our resistances. 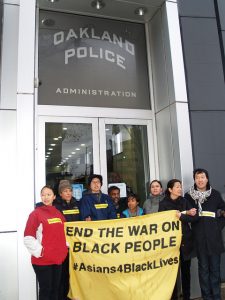 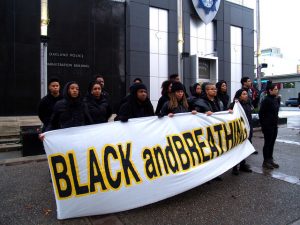 Their first action was on December 15th, 2014, at a Black activist-led protest to shut down the Oakland Police Department. #A4BL blocked off the front entrance to the police station as Black organizers occupied the space in front of the police department, and other groups blockaded entrances and blocked off streets. They have also worked to fight anti-Blackness in the AAPI community by actions such as handing out over 1,000 red envelopes at San Francisco Chinatown’s Lunar New Year celebration. These envelopes contained letters that wrote: “As Asian Americans, we enjoy many rights that were fought for and won by Black liberation movements. Today, we too have the power to stand on the side of justice. We can create harmony by building strong relationships between Black and Asian communities and standing together for Black Lives. Which side are you on?” 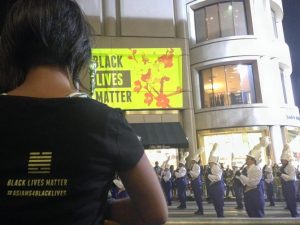 #A4BL is a modern-day movement rooted in a long history of AAPI solidarity with Black liberation, but has formed around a contemporary political and cultural climate created by Black Lives Matter that focuses on Black liberation and the centering of Black voices. Ultimately, the most essential component of A4BL is how Asian American activism does not need to be AAPI-focused in order to achieve liberation for AAPI people. In their mission statement, A4L writes: “We understand that the path to liberation for all communities travels through the liberation of Black communities in America. When Black people have justice and liberation, we all move one big step closer to real freedom”.