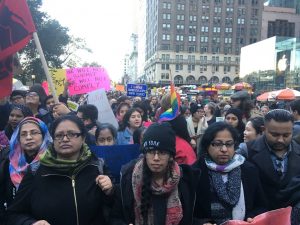 DRUM—South Asian Organizing Center mobilizes low-income South Asian immigrant workers, youth, and families in New York City to lead movements for immigrant rights, worker’s justice, and education reform, among others. It was founded in 2000 at the end of a mass immigration of working-class South Asians during the 1990s, and came out of a need for a base for low-income South Asian immigrants to organize for labor and workers’ rights. Over the past decade and a half, DRUM has built a multigenerational membership of over 2,400 South Asians from across the South Asian diaspora, including Afghanistan, Bangladesh, Bhutan, Guyana, India, Nepal, Pakistan, Sri Lanka, and Trinidad.

Shortly after DRUM was founded, the September 11th attacks occurred, which led to an increase in hate crimes against South Asians and Arab Americans, as well as state-sponsored discrimination and violence, such as Special Registrations for immigrants from Muslim countries, and racial profiling and surveillance against Muslim communities. In response to these various forms of state violence, DRUM formed alliances with local and national organizations to wage campaigns to enact policy change and document human rights violations.

DRUM currently sponsors five community programs: the Racial and Immigrant Justice Program, the South Asian Workers Center, a youth-led program called YouthPower!, the Global Justice Program, and Legal and Community Services. The Racial and Immigrant Justice Program uses advocacy and policy campaigns to end unjust immigration laws and fight racial profiling, two systematic issues that most harshly affect low-income and undocumented South Asians. This program came out of DRUM’s activism in the months after 9/11. The South Asian Workers Center fights unjust wages and labor standards (that significantly affect undocumented South Asians) through monthly Worker’s Rights clinics for community members. The organization’s YouthPower! program is a youth-led initiative that fights for the issues that most significantly impact low-income Desi youth, such as deportation of undocumented youth, unregulated and unjustified school suspensions, and NYPD control of school safety. Like the organization’s other programs, DRUM’s Legal and Community Services is community-centered, and provides DACA (Deferred Action for Childhood Arrival) legal clinics, Immigration Legal Clinics, Workers Rights Legal Clinics, Street Vendor Services, Refugee and Canada Border Support, along with pro bono legal services and advice. Finally, the organization’s Global Justice Program brings the issues of racial profiling and immigrant and worker’s rights to a national and transnational platform, and allies itself with migrants across the world to fight anti-immigrant enforcement regimes and ensure the implementation of international human rights standards.

DRUM has a physical center in Jackson Heights, NY—a neighborhood with a high concentration of low-income South Asian families—and this center hosts the organization’s various programs and initiatives, as well as providing a physical space for the community to come together. Each program adheres to or falls under the key elements of DRUM’s organizing model, which is outlined on its website. The five elements are base building, which is consistent and “on the ground” outreach in schools, workplaces, and neighborhoods; leadership development, which is achieved through workshops and trainings for community members on social justice issues and organizing; policy campaigns; alliance building; and institution building, which the group defines as “building democratic and mass participatory spaces for people otherwise marginalized from shaping public policy.” This organizing model has allowed DRUM to enact change at the individual, community, and national levels.