The Korean Resource Center in Los Angeles, founded in 1983, is a non-profit organization that strives to “empower low-income immigrants, Asian Americans and Pacific Islanders, and people of color communities in Southern California.” The organization strives to combine grassroots activism with effective policy advocacy, especially around immigrant rights, voting rights, and language rights. 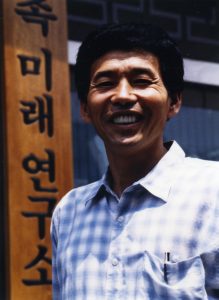 The KRC was founded by Yoon Han Bong, an activist who went into hiding after being blacklisted by the Korean dictatorship at the time for his involvement in the Gwangju Uprising of 1980. This popular uprising was a demonstration against the successive military dictatorships and police states that have held power in South Korea since it first declared independence. Even though it was initially unsuccessful in bringing about democratic reform, it is cited as a critical moment in pro-democracy Korean activism. Upon his arrival in the United States, Yoon Han Bong focused on building an overseas solidarity movement to support the democracy movement in South Korea.

One of the KRC’s primary goals is to educate and organize the community around immigration rights issues. It has launched multiple campaigns opposing anti-immigrant legislation, the first of which was in the summer of 1995, when it joined a coalition of Asian Pacific Islander groups to protest bills that would both limit immigration of immigrants’ family members and exclude immigrants from receiving federal assistance. Today, the KRC’s official platform on immigration includes quality education and jobs for all; health care and public benefits (that are provided in the patients’ primary languages), a fair path to citizenship (with an emphasis on reuniting families), and an end to violence against immigrants. 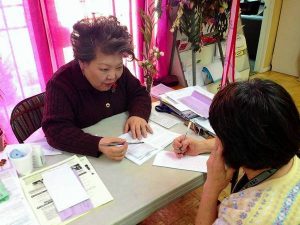 Grace Yi, a KRC volunteer, helps a client fill out a ballot.

Another major goal of the KRC is to get the community more involved in the political process through promoting voter registration, education and mobilization. Throughout the years, the KRC has maintained a focus on educating first-time voters as well as ensuring language accessibility for all. Today, volunteers canvass local neighborhoods, and staff help Korean-Americans fill out ballots.

Lastly, the KRC is involved in providing social services to local immigrants who often lack resources. For example, it advocates for an expansion of health care translation services, since immigrants with limited English proficiency often face difficulties in getting the health care plan they need. Volunteers at the center also interpret health care-related questions for Korean-Americans.

The Korean Resource Center, which traces its roots back to the Korean pro-democracy movement, is dedicated to the education and mobilization of the Korean-American community. Through grassroots activism and community-building, the KRC advocates for immigrant rights, encourages civic participation, and offers social services to those in need.