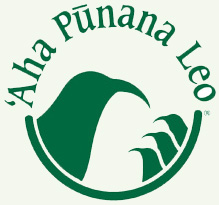 Pūnana Leo is a Hawaiian language and culture revitalization program that operates through a private and non-profit preschool program. It was founded in January 1982 by a group of Hawaiian language educators at a time when the number of native Hawaiian language speakers had dwindled to a few elders and less than fifty young speakers. The first Pūnana Leo preschool was established in 1984; at the beginning of the 21st century, there were eleven total schools on five of the Hawaiian islands. Through various aspects of colonialism, such as deadly diseases and disadvantageous laws, the Hawaiian population, and also its culture and language, faced decline. Pūnana Leo works to revitalize the culture and language that suffered negative impacts. The main goal of this group is to resist historical and present obstacles to teaching and learning the Hawaiian language and culture as well as to inspire future speakers. 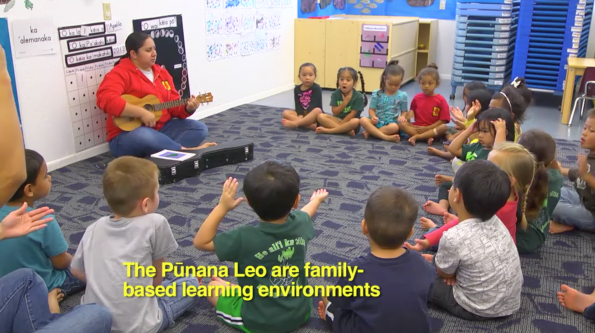 Pūnana Leo means “language nest” in native Hawaiian, as it symbolizes mother birds directly feeding young fledglings, like the educators “feed” the Hawaiian language to the students. The program is immersive, and all students and educators must observe the kapu of “Hawaiian language only.” An educator describes the benefits of the fully immersive program as “the ability to have our keiki using their language even in the māla and everywhere else is always fulfilling.” The immersion extends beyond the classroom, as the program works to engage family members of the students as well. Parents can also be involved in the curriculum, as there are weekly language and culture classes held at the school (hui kīpaepae), family (lā ‘ohana) days, and days to clean the classrooms and school ground to give back to the program (ho’iho’i honua). Parents can also learn from this program. In the context of gardening skills, one parent explains that “[Pūnana Leo is] a great program because it is obviously something being applied at home. It gives my wife and I an opportunity to reinforce their learning and that’s the best way to ensure keiki are progressing. What’s even better is the keiki come home knowing all these gardening-specific words in Hawaiian and they teach them to my wife and I, helping us learn!” (“What is Pūnana Leo?”). As seen in the video, the program entails various “classroom” settings, such as a typical classroom setting, as well as outside. A student describes that “Learning math and stuff is important, but we also need to learn to work the land to survive. So it’s just another ‘classroom.’ But even there, we are taking measurements of the area of the terrace, counting the plants in that area and in certain rows. It’s academic content, but from another perspective” (“What is Pūnana Leo?”).

It is important to contextualize the significance of the Pūnana Leo programs in Hawaii’s history with colonialism and American annexation.

In 1778, Captain James Cooke and his crew arrived, and knowingly brought diseases that the Hawaiians lacked resistance to from Great Britain. Other diseases, such as measles, also came to the islands later, as which lead to the disastrous and significant decline of the native population. Not only did the decline of the Native population negatively affect who held power in Hawaii, but the influx of white Americans and immigrants also changed the power dynamics. Native Hawaiians lost legislative power as Calvinists, missionaries, and American government officials, who sought to “civilize Hawaii,” changed policies and established a system that would benefit white and wealthier residents. After the overthrow of the Kingdom of Hawaii in 1893 and the annexation of the islands to the United States, the Hawaiian language was banned. The official language ban, compounded with the decline in Hawaiian population and thus the language and culture, suppressed opportunities for the language to flourish, and the number of speakers continued to fall.

Through Pūnana Leo, Native Hawaiians are reclaiming the language and culture that were oppressed.