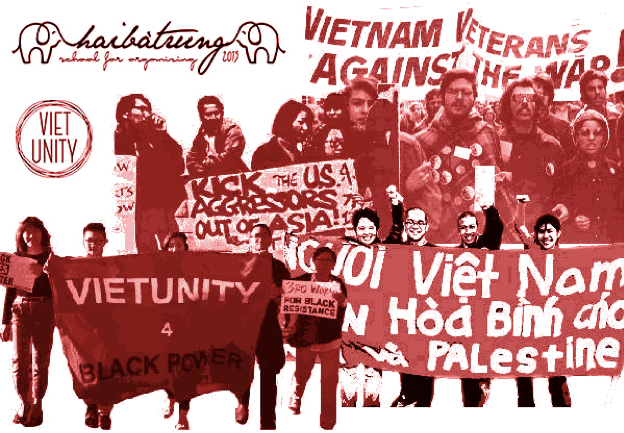 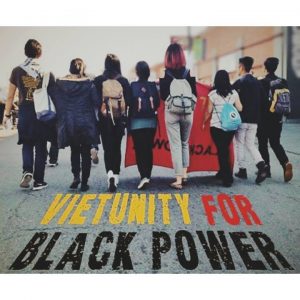 VU marching in the #3rdworld4blackpower contingent at the Reclaiming King’s Legacy March in 2015.

VietUnity is a small grassroots organization based in Oakland, CA. Currently, VU is run by four core members, and they have a consistent cohort of ten to fifteen people who work with them. VU is best described as a leftist ethnic affinity group: its members are young Vietnamese activists looking for a common space. They work in the San Francisco Bay Area, home to many activist groups from the Asian American Movement in the 1960s. VU draws upon this rich history, organizing around Third World organizing principles such as self-determination, unity, anti-oppression, anti-imperialism, and critical consciousness. Crucially, VietUnity envisions itself as part of a “larger multi-racial and multi-class movement for social justice.”

The group has a long history of radical organizing. Its founders came together in spring 2004 to create a group specifically for radical Vietnamese folks. Up until that point, the gap in radical Vietnamese activist work had not been filled since the era of the Asian American Movement itself. Since its creation, the group has consistently been vocal against issues of injustice. Much of their work has focused on protecting and uplifting Oakland’s marginalized communities. Examples of these efforts include protesting against the Oakland mayor’s housing displacement measures, writing a report that shed light on the manifold issues Vietnamese Americans living in Oakland face, and funding local queer Vietnamese artists. VietUnity also puts on the Hai Bà Trưng School for Organizing, which is one of their most important and unique projects. The three-day program was created in 2011 by Vietnamese activists (unaffiliated with VU) who wanted to teach “organizing theory and best practices, Việt Nam history for self-determination, and social justice movement building work happening locally.” After the first year, VietUnity adopted the program, and has organized and taught at the program every year since. 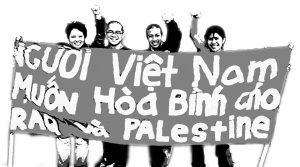 VietUnity at an anti-Iraq War protest in 2006.

In addition to community-specific work, VU is also currently focused on addressing anti-Black racism at a community and national level. In this effort, they have joined the #Asians4BlackLives movement, putting themselves in network with other Asian Americans who center their activism around fighting against anti-Blackness. VU also hosts workshops to raise awareness of anti-Black racism in their community. (Warning: the next sentence contains mention of death and police violence.) In particular, after the deaths of Alton Sterling and Philando Castile, VU sprung to action by putting on a workshop where they read the Letter for Black Lives in both Vietnamese and English to their community. Following this workshop, they have made plans to work with local schools to create a racial justice program to educate Vietnamese youth. In doing this, they hope that their students will engage their parents in conversations about anti-Blackness.

VietUnity has done a lot of important work in their time, showing remarkable resilience in the face of various periods of struggle. Their future goals include growing the size of their organization and continuing to radicalize their community through encouraging intergenerational participation and exploring tactics such as theater of the oppressed in their workshops. In the meanwhile, VietUnity continues to be a necessary space where Vietnamese radicalism can flourish. 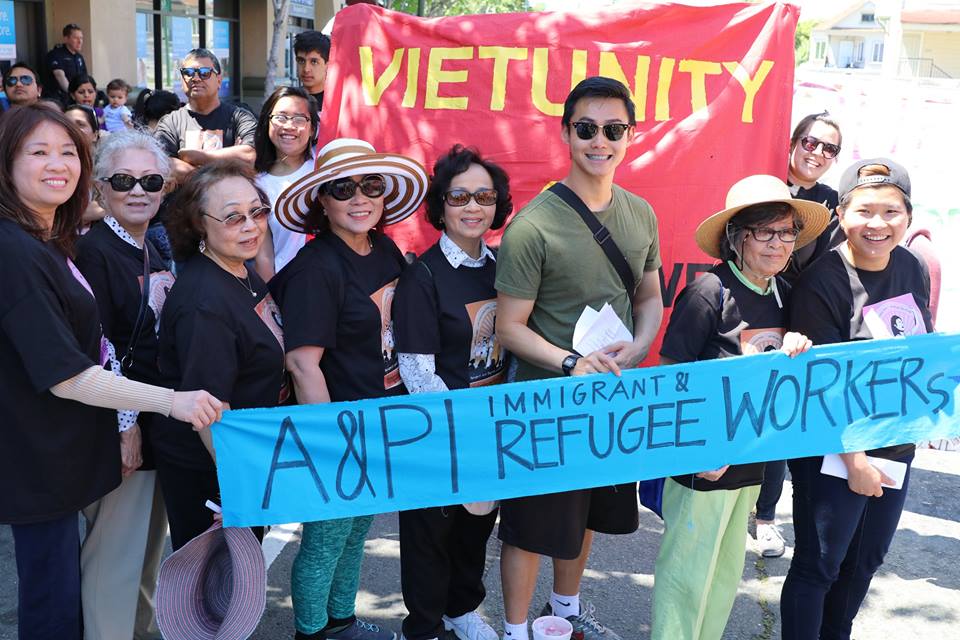 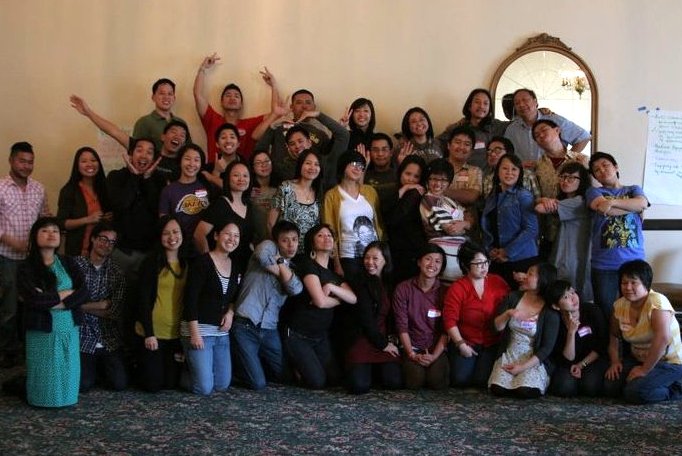 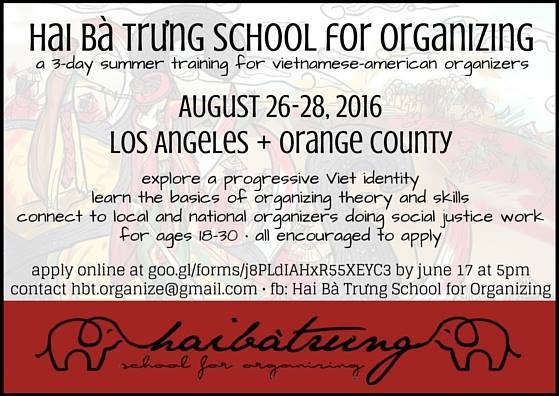 Flyer for the 2016 Hai Ba Trung School of Organizing. 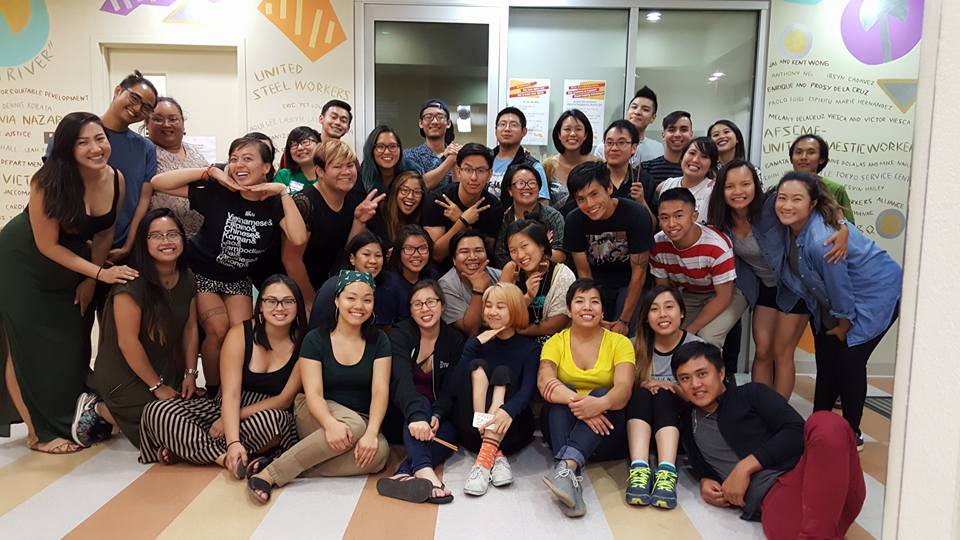 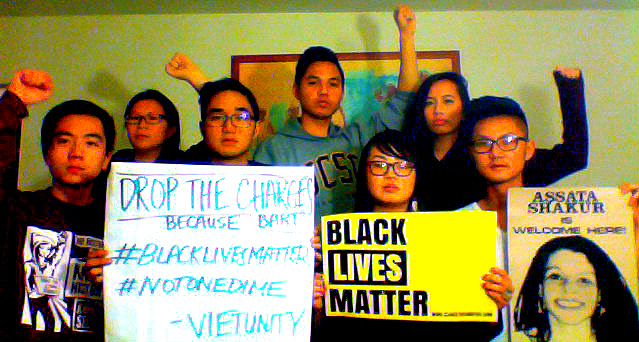 In support of the Black Friday 14 who shut down the Bay Area Rapid Transit. 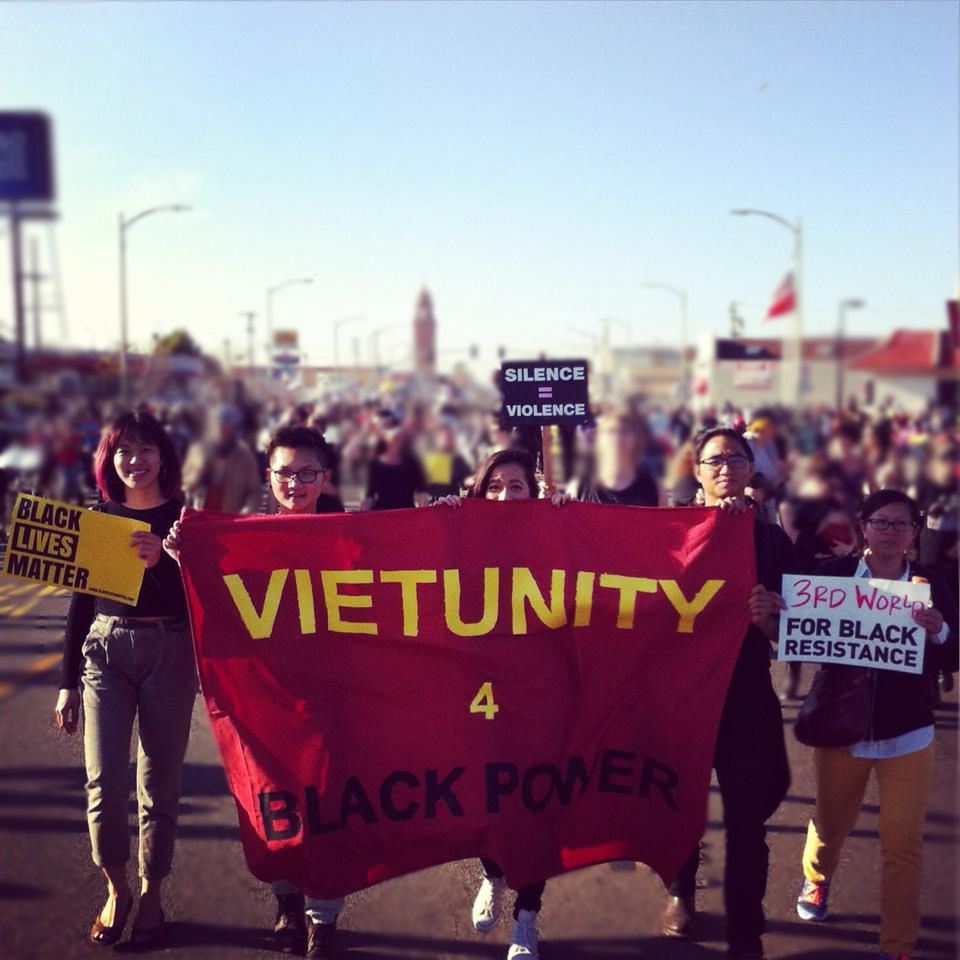 VU marching in the #3rdworld4blackpower contingent at the Reclaiming King’s Legacy March in 2015.