Image Description: FACES rally at the UN Climate Change Conference in 2016. Many people stand in front of a display of the world’s flags holding signs that say “People’s call to action” and “Stop funding fossils.”

FACES, the Filipino/American Coalition for Environmental Solidarity, is a grassroots organization based in Berkeley, California working for environmental justice in the Philippines and beyond. The organization was originally founded in 2000 with the mission to clean up former US military bases in the Philippines. Today, their mission has expanded to “…address transnational environmental justice issues that impact Filipino communities in both the United States and the Philippines,” which they are working to achieve “…through advocacy, education, service, and organizing.”

There have been several campaigns launched by the organization. The first one, which the organization was founded around, was the Bases Clean-up Campaign. As the name implies, the mission of this campaign was to clean up the toxic waste left behind at the US military bases, particularly at Subic Bay. They also fought for the US to formally recognize the impact they had, and demanded reparations by the US military for the victims of the environmental harm that the bases caused. Since then, FACES has started several other campaigns, the most successful of which has been the Chevron Accountability Campaign. The campaign, started in 2006, called for the shutdown or relocation of the heavily polluting Pandacan oil depot. The depot was located right in the heart of Manila—the capital of the Philippines and the most densely populated city in the world, meaning that hundreds of thousands of Filipinos were affected by its pollution. In 2015, almost 10 years after the campaign was launched, the Pandacan oil depot was finally shut down. 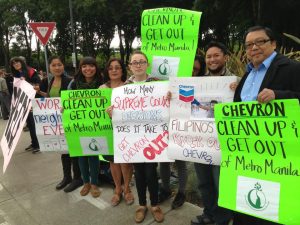 Image Description: FACES Anti-Chevron rally. People stand holding bright signs that say “Chevron: Clean up & get out” and other slogans.

While initially the organization was based around Filipino-Americans working for environmental justice in the Philippines, in 2005 the organization broadened their lens to include issues facing America. This has most recently manifested in FACES’ standing in solidarity with the Standing Rock Sioux to protest the Dakota Access Pipeline. There are parallels with the construction of the Pandacan oil depot and the pipelines leading to it—in both cases, the US completely disregarded the environmental effect that such a pipeline would have on the indigenous land it was being constructed on and on the people who rely on that land. FACES has even broadened its lens to be worldwide— the organization has recently launched the Climate Justice Campaign, a global outreach campaign dedicated to educating the public on the effects of manmade climate change, as well as partnering with the True Cost of Chevron coalition, a coalition made up of multiple countries in the Global South demanding accountability for Chevron’s pollution.

All of this has served to further FACES’ desire to “protect and preserve the resources of the environment, and sustain all living creatures for present and future generations.” More than just sustaining the environment, however, FACES also has a vision of “…an interconnected world where people are healthy and free to realize their potential through cooperation and solidarity.” This vision grounds the work they do—FACES works for environmental justice not only for the sake of preserving the environment itself, but for the sake of the the people who live in those environments.