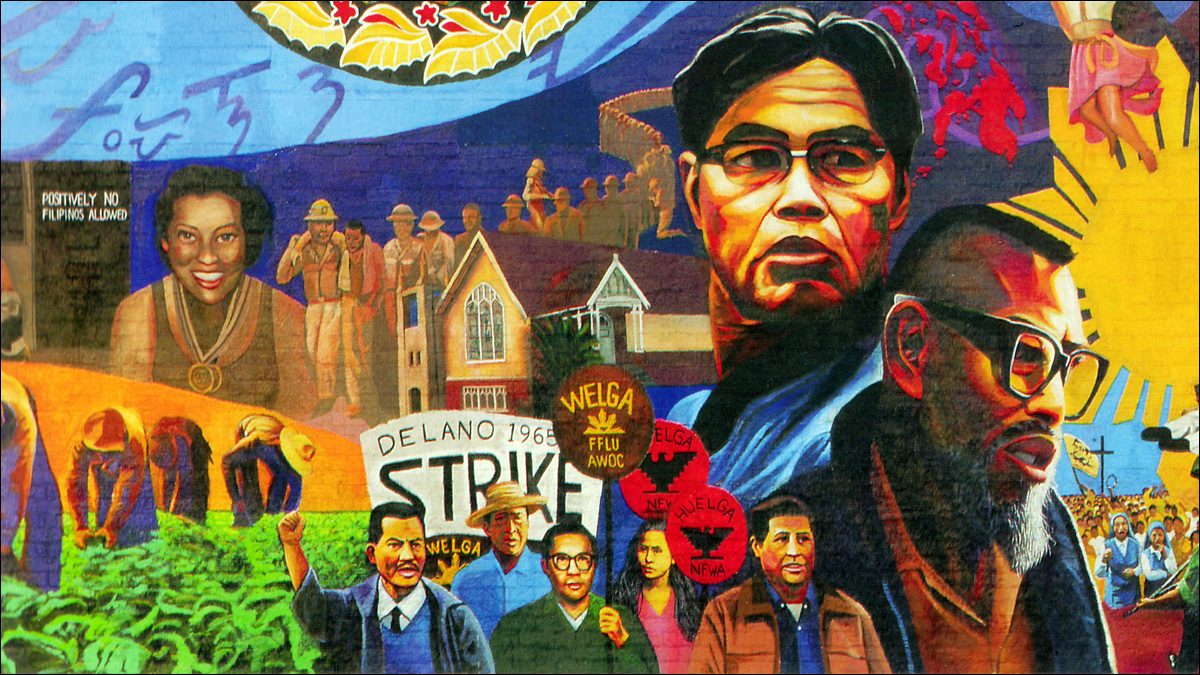 Image Description: This colorful detail from a mural in Los Angeles’ Filipinotown shows Philip Vera Cruz and Larry Itliong. Underneath them, people hold signs at a strike. To their left are people working in the fields. To their right is the star from the flag of the Philippines.

Have you heard about the Delano Grape Strike, that happened in California in the 1960s? If so, did you know it was started by Filipino farmworkers? Many people think about the grape strike as a movement led by César Chávez and other Mexican American activists. This is partly true—they were very important to the movement. But that version of history doesn’t tell the full story.

For some historical context—In the 1920s and 30s many Filipino men immigrated to the U.S. They could not become full citizens, but they were allowed to immigrate despite exclusions of many Asian immigrants because the Philippines was under U.S. colonial rule. They were promised equality and opportunity, but instead faced racial discrimination, limited work opportunities, low pay, and poor working conditions. They migrated around the West Coast, Alaska, and Hawaii, going wherever there was work. By the time of the Delano Grape Strike, many of these workers were in their 50s and 60s. They were referred to as manongs, a respectful Ilocano term for ‘older brother.’ 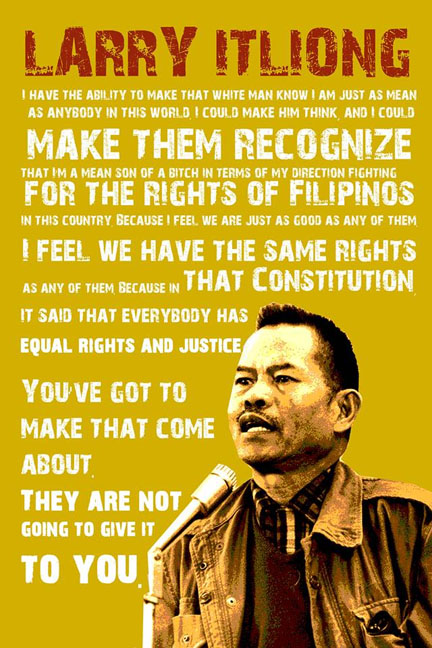 Image description: A poster of Larry Itliong that includes one of his quotes.

On September 8th, 1965, the Agricultural Workers Organizing Committee (AWOC), a majority Filipino labor group, initiated a strike against Delano grape growers amidst cries of “welga!” (the Tagalog word for “strike”). The purpose of the strike was to get union contracts, higher pay, and improved working conditions. The organizers, including Larry Itliong and Philip Vera Cruz, knew the strike could not be successful without the solidarity of Mexican farmworkers. Otherwise, Mexican workers would be brought in to break their strike. They asked the National Farmworkers Association (NFWA), a majority Mexican organization led by César Chávez and Delores Huerta, to join their strike. The NFWA joined the strike on September 16th. In 1966 the two groups merged to form the United Farm Workers Organizing Committee (UFWOC), which later became known as the UFW (United Farm Workers). Chávez was the president of the union, and Itliong was the vice-president. Image description: A poster with the heading “There’s blood on those grapes” is above a cluster of green grapes with a drop of blood on them. To the side, smaller text reads “Boycott non-UFW grapes, lettuce, and Gallo wine.”

Their actions included picket lines, marches, and an international boycott on table grapes. In the spring of 1966 they began marching from Delano to Sacramento. The march began with seventy workers, and ended with 10,000 supporters. A global boycott of table grapes began in July,1968, during a summer that involved many struggles for freedom around the world. After five years of hard work, cooperation, and people around the world refusing to eat Delano grapes, they reached a contract agreement with grape growers. Eventually Larry Itliong and Philip Vera Cruz left the UFW. They felt Filipino voices were not being equally heard within the union.

The California farmworkers movement was not simply a Mexican American movement or simply a Filipino American movement. It was both, and it owed its success to that fact. The erasing of Filipinos within the telling of this history mirrors the way Asian American struggles for social justice have been erased from public knowledge. Asian Americans are stereotyped as complacent, silent workers, completely ignoring their histories of radical labor organizing. Efforts are being made to bring this history back to light. Californians celebrate Larry Itliong Day on October 25, and California schools are required to teach about the important role Filipino workers had in the California farmworkers movement. Please, continue to learn about and tell this history, so it can become common knowledge.