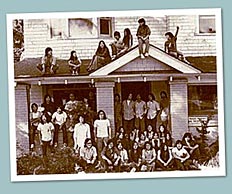 Image Description: Some members of the Yellow Brotherhood posed in front of the YB House.

The Yellow Brotherhood was started in west Los Angeles, California in 1969 as a community of Asian youth. The founders included Nick Nagatini and Art Ishii. Together, they made their own gathering space out of a building that they affectionately dubbed “the YB House” in which they organized with the goal of working towards resolving issues that plagued the Asian American youth at the time. These problems included high rates of gang involvement, drug use, depression, and suicide.

Tackling these issues included active gang disbandment and drug removal from within the various neighborhoods and communities that they existed in. Aside from these more reactive methods of ending these issues, the Yellow Brotherhood also created programs that promoted community and coalition building with other Asian American groups. Such programs included boxing classes, weight lifting classes, tutoring sessions, and basketball & volleyball leagues. In addition to building community, these programs served as more proactive measures of ending the issues that the youth faced by giving them safer alternatives to the illicit, dangerous activities that were slowly becoming integrated into their lives as the norm. More passive programming also existed in the form of mentorship from the older members of the organization, which became increasingly important for these Asian American youth that did not fit into the Model Minority image of Asian peoples that existed (and continues to exist) within the minds of the American collective. Outside of domestic issues, the Yellow Brotherhood also participated in anti-imperialist activism with particular focus on the ways that the military industrial complex operated during the Vietnam War. Such activism included demanding companies be held accountable for manufacturing the napalm that destroyed Vietnamese communities during the war. Through both these domestic and international efforts, the Yellow Brotherhood became cemented in history as an important Asian American activist organization. 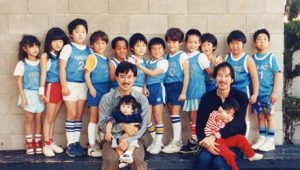 only exists through name as the title for Asian youth basketball teams located in Los Angeles, California. Many of the members of the original Yellow Brotherhood are involved in the oversight of these sports teams: serving as coaches, parents of children on the team, and general mentors. Although no longer as radical as it once was, this organization’s legacy of community and mentorship of Asian American youth lives on.