Nazma, a Bangledeshi woman who immigrated to New York City in 2003, faced sexual and verbal abuse from her husband for years, until one day his violence led her to the hospital. After Nazma described how her partner beat her head against a bathtub because she refused to engage in sexual intercourse, her physician referred her to “Sakhi.” Sakhi (pronounced, “SUH-khee”) is a Hindi/ Urdu word for “female friend,” and this word is the basis for political solidarity for the New York City-based anti-domestic violence advocacy group “Sakhi for South Asian Women.” Founded in 1989 by a group of South Asian women professionals who worked in fields including banking, film, law, computer science, and public health, Sakhi aims to provide a confidential location for South Asian women suffering from domestic violence in NYC.

In the 1980s, the NYC metropolis had many religious and cultural centers, professional associations, and national-specific groups serving various demographics of South Asians, but none existed to help South Asian women specifically. Recognizing the need for a physical center to help these women experiencing intimate partner violence, Anannya Bhattacharjee, Mallika Dutt, Tula Goenka, Geetanjali Misra, and Romita Shetty started Sakhi in 1989. Sakhi’s creation provided marginalized South Asian women with a confidential location where women could seek shelter, ongoing psychological support, health consultations, and legal counsel. Sakhi helped to boost the image of South Asians in the social justice setting, as evidenced by co-founder Romita Shetty’s statement in 2016: “I feel a little proud that Sakhi has created many more South Asian organizations— both with women’s and South Asians’ focus. But, none of those existed in 1989, and not for many years after that.” Sakhi set a precedent for more South Asian social justice organizations to come in the late 20th and early 21st centuries.

Over the course of 27 years, Sakhi made issues surrounding gender-based violence more salient to the NYC community by protesting publicly as well as providing resources to affected women. Considering the diversities within the South Asian community, Sakhi strives to empower women from all types of socioeconomic status, religion, ethnic origin, education background, nationality, or immigration status. Victims of intimate partner violence are often silenced and cautious of seeking help in fear of their partners’ reaction, so Sakhi’s shelter and ongoing support during times of urgent (or non-urgent) crises is critical to survival. 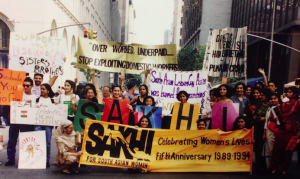 Sakhi marching for their fifth anniversary in 1994