The Associated Press wrote a brief story about our project following Rhode Island Senator, Sheldon Whitehouse’s, mentioning of the Gaspee VR project during his speech in the United States Senate chamber on  June 7, 2017.

In this speech on the Senate floor, Sheldon tells of the burning of the HMS Gaspee in 1772. In one of the first major acts of defiance against the British Crown, a few brave Rhode Islanders successfully raided and destroyed the British ship in Narragansett Bay and helped start America’s war for independence. 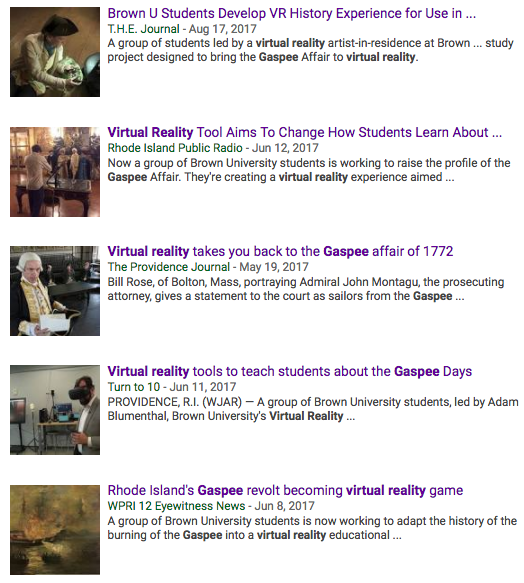 See Articles about the Gaspee in VR

PROVIDENCE, R.I. — A Rhode Island act of rebellion that was one of the precursors to the American Revolution is being turned into a virtual reality game.

Friday marks 245 years since the Gaspee Affair, when a group of colonists set fire to a British ship in Narragansett Bay on June 9, 1772.

A group of Brown University students is now working to adapt the history of the burning of the Gaspee into a virtual reality educational experience for students in middle and high schools.

Rhode Island’s Democratic U.S. Sen. Sheldon Whitehouse discussed the project on Tuesday, during an annual speech he gives on the Senate floor commemorating the 1772 event.

Rhode Island residents also are scheduled to mark the occasion during this weekend’s annual Gaspee Days celebration and parade in Warwick.