After a couple of conversations about how we wanted to create our educational experience, The Gaspee Affair VR has just “set sailed” into production! We plan on building a VR experience for the HTC Vive using Unity3D, a popular game engine used for both professional video games and hobbyist experiments alike.

We plan on creating an educational experience built around a “hub and spoke” model, where users will be walking around a main “hub” area that can connect them to individual areas where they can experience specific portions of the Gaspee Affair’s history.

So far we’ve been building the foundational elements of the experience, such as creating ways for users to switch between levels, intractable objects that can be picked up and used by the player using the HTC Vive controllers, an inventory system, trophy cases for collected objects, and a series of empty rooms waiting to be filled to the brim with educational content.

Some interesting challenges we’ve faced so far have been creating a logical User Experience system for VR. The traditional button and window-pane system that we’ve become accustomed to when interacting with flat computer screens don’t perfectly translate to VR. Instead, we need to take a physical object-based approach. Instead of tapping a button to change a scene, the user can open a door or engage in some other physical action to indicate their intention to change environments. One great example of VR scene changing can be found in Squanchtendo and Crows Crows Crows’ Accounting, where the user is prompted to put on a virtual VR headset (very meta) to transition to the next scene.

Because creating digital assets for VR requires a great deal of 3D modeling prowess, we’ve decided to do all of our asset creation with Google’s Tilt Brush. This software is a 3D drawing program that can be directly exported into Unity, thanks to an API offered by Google. This program is very intuitive and will allow anyone to rapidly prototype new assets for our experience. 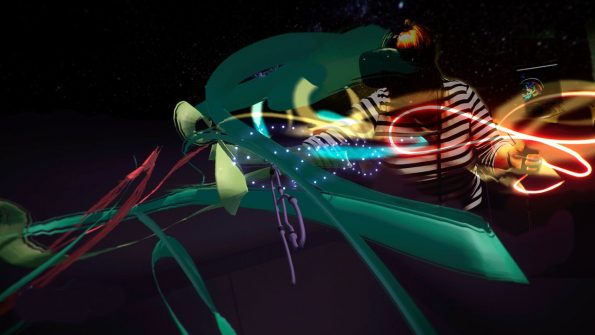 Almost all of our code will be using the Virtual Reality Toolkit (VRTK) made by thestonefox. This library supports controller events, object interactions, a variety of locomotion types, and more. VRTK is also made to support the Oculus Rift, Google Daydream and Cardboard, which will make things a bit easier to port to other headsets.

Now that our code base is all set up, we can now focus on the creative end of this round of production: shooting 360 video, creating assets in Tilt Brush, and recording audio.