For Valentine’s Day, my girlfriend and I really wanted to go all out, make a big show out of it. She’s really into the Patriots, hot off a Super Bowl win, so I got her a bunch of her favorite cupcakes, Nutella, some flowers, and a brand new Pats Super Bowl hat on top. I was feeling pretty cocky, sure that I had the win down pat. But then she bought me a Samsung Gear VR. There’s always next year.

The Gear VR is an interesting device. Most Android phones work well with it, if you use it like an expensive Google Cardboard, but you lose all access to the Gear VR store and any of the button controls. Add on to that my phone having the headphone jack blocked by the headset’s grip, and I just end up feeling a little dumb putting my cheap Motorola phone in there and hoping for the best. It isn’t all bad, though, as any VR app that requires only the gyroscope, as all Cardboard-compatible experiences do, still work, more or less. 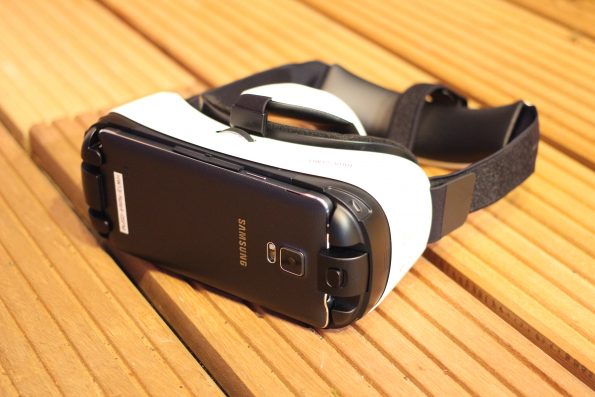 The Gear VR with a Samsung phone attached

That doesn’t mean I like it much, though. Playing around with my cheap phone is just a constant reminder that I’m missing out on something more. The screen resolution shows its faults with every app, everything always looking a little worse than I know it should. There’s also the power limitations, with some high-quality 360 videos struggling to run and often just buffering, pixelating, or flat out just crashing the app. It doesn’t feel great.

My personal disappointments over all this has really had me thinking about the state of low-end VR for things like education. There’s been a push on many fronts that the low-end is easily accessible for classrooms all over the US. And to an extent, that’s true. As weak as my phone might be it could run most Cardboard apps fine, but where does the leave the “mid-tier” headsets like the Gear VR? It’s true that quality-wise, it can do some things that you just can’t on something simple like a Cardboard, but having a product that isn’t accessible enough for a classroom and also not good enough for gaming just seems to leave it in a state of novelty.

I’m sure in time there will be a true “middle class of VR” that can appeal to both the low and mid range, much like Android filled that mobile gap over the course of a decade, but for now, it kind of begs the question of why anyone would design educational tools with only the Gear VR in mind. Now of course there’s always going to be people trying to get in on the ground floor of a new technology, as they should, but it seems that at least for the moment, anyone developing educational tools just for the Gear should consider creating a lower-end port, if they actually care about reaching students.

Even for developers and educators looking ahead and betting on future iterations of Gear VR being that mid-tier standard, it seems that the Samsung-owned headset would be a hindrance to itself. According to statistics, Samsung cell phone owners make up almost 70 million users, about a quarter of the US cell-phone-owning population. That number in and of itself is pretty big, but when you take into account that many of those users don’t own the high-end phones that would be necessary to run Gear VR’s library, you realize how limited in scope Gear’s futures are for a product that’s expected to run in most classrooms across the States. And since it’s Samsung, it’s hard to expect them to release their proprietary software out to the public the way Google did with Android. With all these things in mind, it seems that the Gear’s lifespan in education, without some major design changes like dedicated hardware for headsets, is fleeting, if anything.

But at least I can watch YouTube videos in bed. Of course, the quality isn’t the best and I can start feeling my phone giving off heat like a Chili’s fajita 20 minutes in, but at least I have that. Here’s to a, hopefully, cheaper 2018.