What is the Jump system? 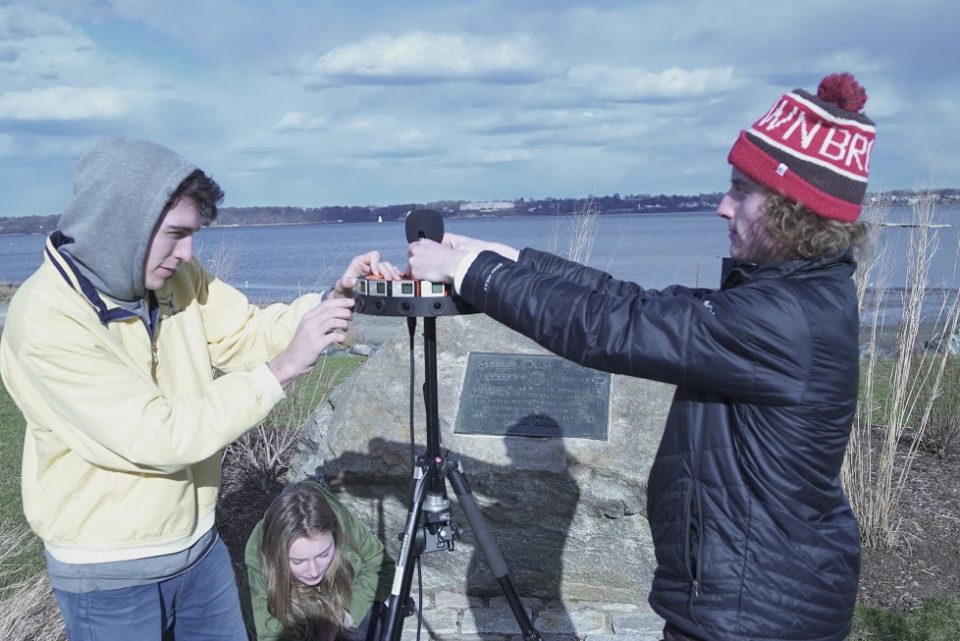 At the start of the semester, as part of Adam Blumenthal’s new partnership with Google,  the Gaspee team was given access to one of Google’s 16 GoPro Odyssey cameras. The rig is comprised of 16 GoPro Hero4 Black cameras and shoots 360° stereoscopic footage in resolutions as high as 8K. After a shoot, the cameras’ sixteen micro-SD cards are loaded into a nine-slot SD card rack, and Google’s Jump software does the rest.

Jump downloads the footage and ejects each card automatically. The user then uploads the footage to Jump servers. The footage is stitched together into a seamless sphere of immersive VR video and sent back to the user’s computer. From there, it is possible to edit the footage right in Premiere Pro like with any other video.

Shooting with the Jump

The camera—officially called the GoPro Odyssey, but usually referred to as “the Jump”— is flexible and easy to use. Setup requires only a few minutes, and the camera performs well in both high- and low-light conditions. In addition to the camera itself, the Jump kit includes a Switronix Hypercine battery, a Manfrotto tripod, and a 360° Zoom recorder-microphone.

The first thing to do when arriving on location is to find a stable area on which to set the tripod. Screw the camera into the tripod and connect the battery via XLR cable. The camera’s has blind spots on the top and bottom, so it’s probably best to store the battery directly under the camera. The blind spots are good to keep in mind when thinking about what you want to capture. Using a level, check that the camera is level (or angled just as you want it), because any tilt will be very obvious when the viewer puts on a headset.

The Zoom, which is powered by two AA batteries, clips onto the top of the camera.

The entire rig is controlled through the first GoPro, which is the camera to the left of the “1 ←” symbol on the outer ring of the rig. By holding the power button on this camera, all sixteen cameras will power on. Here, the user can control the camera’s settings and format the SD cards. After checking that all sixteen camera displays are on and reading out the same information, you’re ready to shoot. Just make to hide if you don’t want to be in the shot!