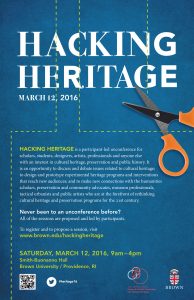 Hacking Heritage started in 2016.  Truth be told, the idea was partly filched from Baltimore Heritage, which has organized the Bmore Historic unconference on heritage issues in Baltimore since 2011.  One of our Public Humanities MA alums attended Bmore Historic and raved about it to us, so we thought we’d organize something similar in 2016.  That first year, we had a terrific committee of about a dozen people in the fields of heritage and preservation who helped organize the event and get the word out.  About 90 people spend their Saturday in March at sessions like “Who’s Studying Slavery?” “Preservation vs. Design,” “Hardboiled History and Grotesque Genealogy: Retelling Genre Fiction,” “Public History, Storytelling and Rhode Tour,” “Who Cares about the Truth?” “Latino History and Heritage,” Re-Mixing Cultural Heritage: Digitization Projects and Digital Library Tools,” “The Green Movement and Historic Preservation,” “Community Archives,” and “Inspiring Pride in Place: Doors Open Rhode Island.” 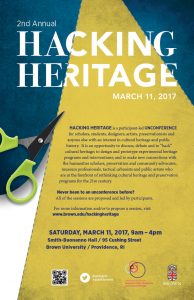 In 2017, we gathered again and discussed science fiction, mannequins, Cathedral Square, CrimeTown, decay, data, Emily Dickinson, Jane’s Walk and the impending destruction of the much-hated Fogarty Building in downtown Providence.  One result of the session on the Fogarty Building was the Fogarty Funeral, which was organized on the fly by many who had attended that session when the wrecking balls came for the Brutalist building earlier than expected. In 2018, we discussed business models for non-profits, ownership of digital heritage, a new LGBQT heritage trail in Rhode Island, the art of the happening, the Rosa Parks Project at Waterfire Art Center, the demise of the Cable Car Cinema, an experimental escape room event at the Haffenreffer Museum of Anthropology curated by two Public Humanities Center MA students and the development of Year of the City.  Our poster took inspiration from Edward Gorey, but our approach was not macabre. 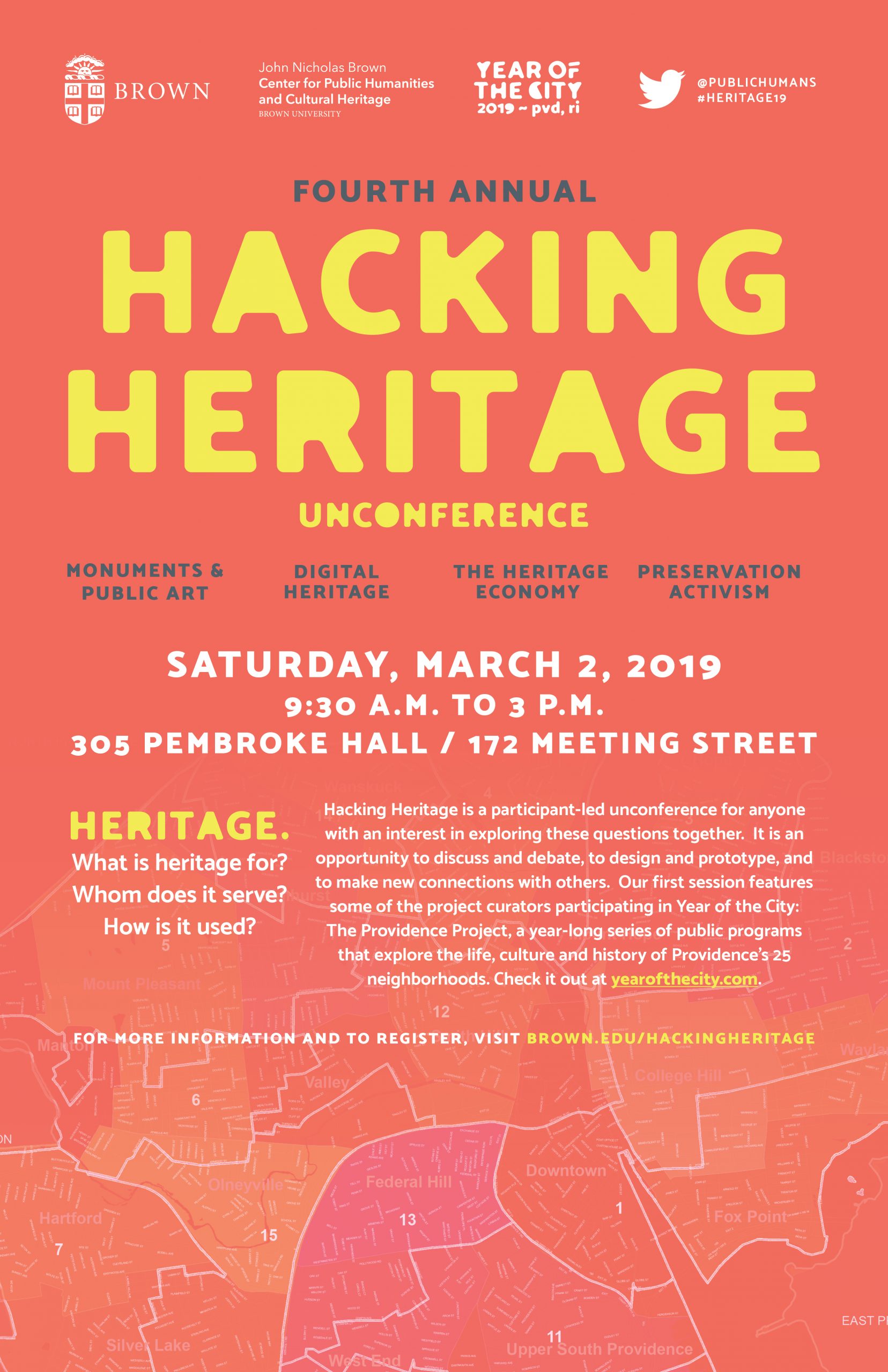 2019 was Year of the City: The Providence Project, and many of the sessions at Hacking Heritage related to the history, life and culture of Providence’s 25 neighborhoods.  There were sessions on the city’s vacant lots and wild spaces, on possible uses for the “Superman” building downtown, on the future of preservation training and curricula, on podcasts and heritage, on Wikipedia’s coverage of Providence history and culture, and on the challenges of doing preservation work in the Anthropocene.  We were snowed out by a serious blizzard (even by New England standards), so had to move the event later into March.

In 2020, Hacking Heritage moved off of Brown’s campus into the Silver Lake neighborhood.  61 participants came together at the Silver Lake Community Center to discuss issues related to equity in preservation practice, the need for more programs related to the history of slavery in Rhode Island, novel adaptive reuse proposals that might invigorate underused historic buildings on an incremental basis, suggestions for the future use of the Superman 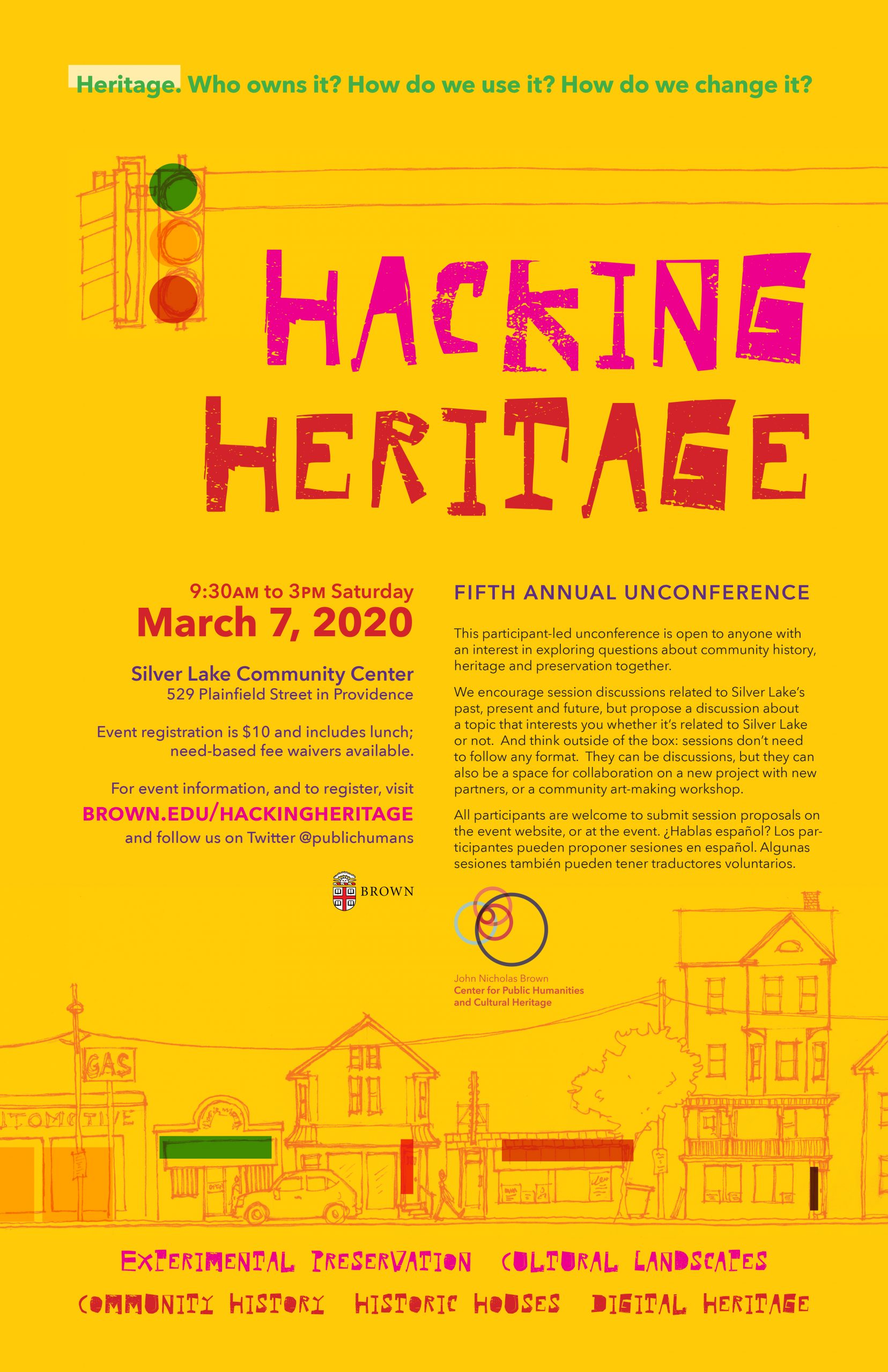 building downtown, an exploration of ideas about how to commemorate the 250th anniversary of the American Revolution, spaces of death in the built environment, and the history and lived experience of the triple-decker.  Some sessions roved outside — to St. Anthony’s church next door, and around the neighborhood — and there was a “Tsuru for Solidarity” crane-making workshop.  All of the conversations and interactions were enriched by the many neighborhood residents who came to share their photographs, maps, memorabilia, and memories related to Silver Lake. 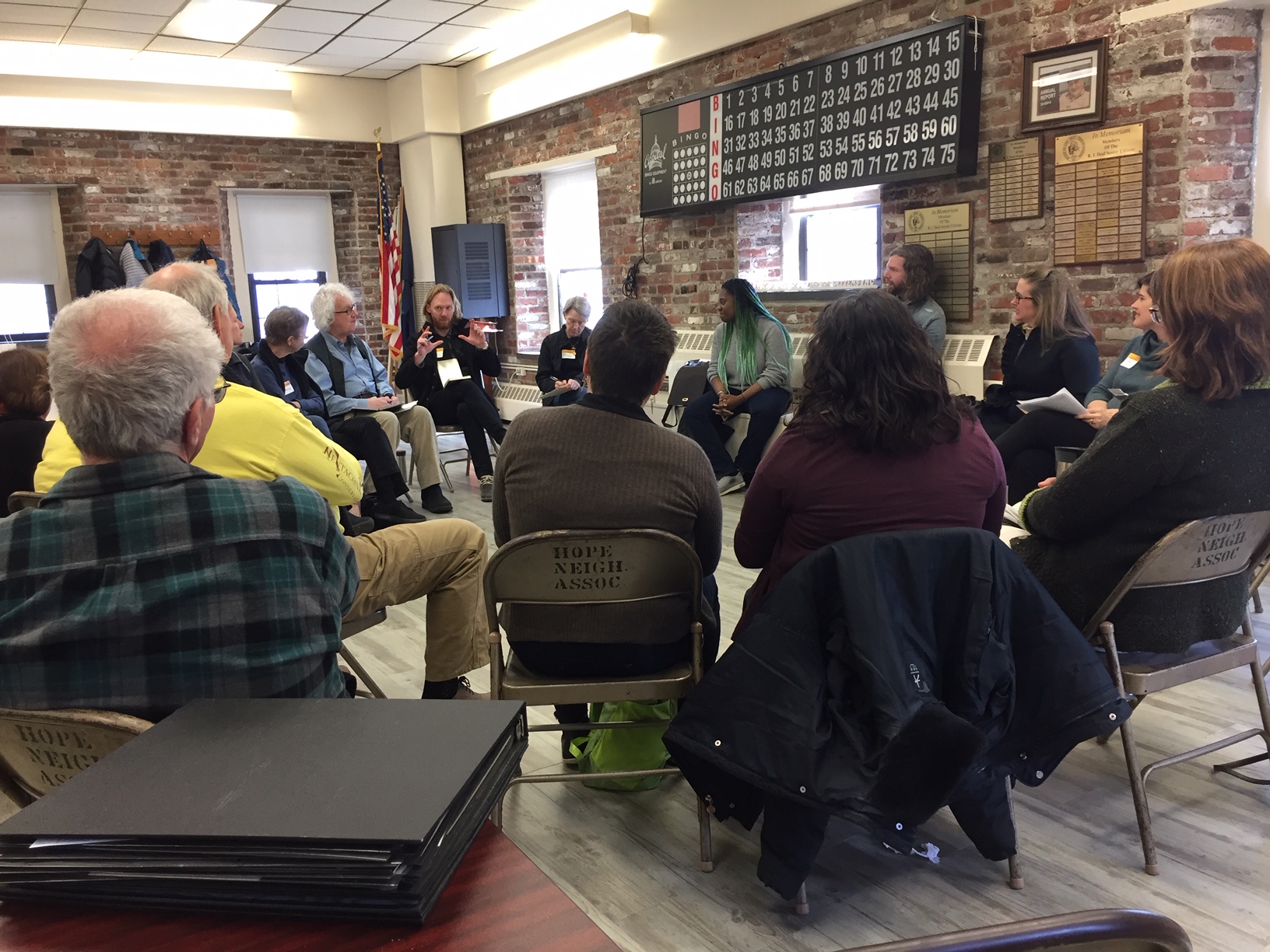 We hope that Hacking Heritage has made a contribution to community conversations about preservation and cultural heritage and that it has fostered new collaborations and fresh ways of thinking about this field.  If you haven’t attended an unconference in the past, we hope you will join us.