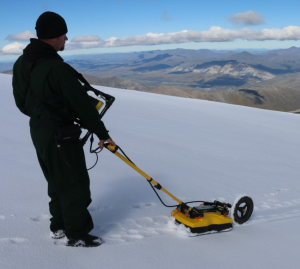 Thomas Urban using ground-penetrating radar to survey an alpine ice field in the Brooks Range, Gate of the Arctic National Park, Alaska. Such features sometimes contain cultural resources that have remained frozen for many years and may now be threatened by environmental change. Photo by Jeff Rasic, National Park Service, 2016.

My first experience with the Haffenreffer Museum was taking the graduate seminar in museum studies as an undergraduate student at Brown University. This course culminated in the development and installation of a student co-curated exhibit featuring a range of textiles from the museum’s collections, drawing on both archaeological and ethnographic examples from different places and time-periods organized around the common theme of globalization. Warp Speeds, as it was titled, was also the inaugural exhibit of the newly renovated Manning Hall gallery, the museum’s first on-campus gallery. Manning Hall now serves as the museum’s primary exhibition space, though the paint was barely dry on the walls when Warp Speeds launched in 2005, the year I graduated from Brown. I was subsequently employed by, or collaborated with, the Haffenreffer Museum in several capacities, including assisting with this new exhibition space and participating in a variety of research projects associated with the museum, both collections-based and field-based.

Experience developed working with objects in the HMA collections indirectly led to my involvement with the tribunal of Saddam Hussein in 2006, for which I was employed as a cultural objects analyst on a mass graves investigation team based in Baghdad. After Iraq, I briefly did some ethnographic field collecting for the museum in Mexico and Guatemala, which contributed to an exhibition at the Anne-Marie Brown Memorial on Brown’s campus (titled Brown Collections A – Z) and was also featured in the Brown Alumni Magazine in 2007 (No baby doll: this little Zapatista is a lesson in politics). 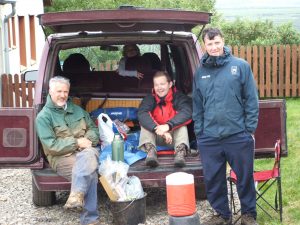 Around this time, I also became involved in the museum’s circumpolar field research. Participation in NSF-funded archaeological investigations in Iceland with HMA deputy director, Kevin Smith, in 2008 and 2009, led shortly thereafter to additional work in Alaska. This included fieldwork in Kobuk Valley National Park with Circumpolar Laboratory director, Doug Anderson, beginning in 2010, and at Cape Krusenstern National Monument, Alaska, on another NSF-funded project run through the HMA by Museum Research Associate, Christopher Wolff.

This northern fieldwork influenced the trajectory of my research career by leading directly to numerous additional projects at arctic and sub-arctic sites over the past six years, including the development of many ongoing collaborations with the U.S. National Park Service. Research positions that I later held at Oxford University and now Cornell University, have included fieldwork throughout Alaska, even at some sites that were initially investigated by J.L. Giddings, Brown’s first anthropologist and the Haffenreffer Museum’s first director.