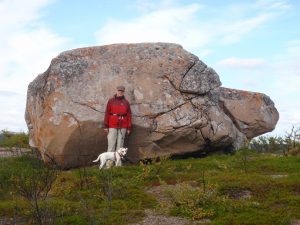 With Vili, the archaeology dog, at Varangerfjord, in Norway’s Arctic, 2011.

I remember coming to Brown in the fall of 1990 with Jarmo Kankaanpää (my then boyfriend, now husband), both of us as grad students with quite a lot of archaeological fieldwork already behind us. Arriving at Giddings House, trying to figure out who is who, meeting the grad advisor to decide which courses to take… The core seminars were a must, of course, and Doug Anderson’s Native American Archaeology was inevitable, but as to the fourth one, that fall semester seemed to offer few suitable ones, especially considering our interest in arctic anthropology and archaeology. The archaeological field course would have been a possibility, but we were advised that our field experience made it rather redundant. So in the end an exception was made: although first year grad students were normally not permitted to do Reading and Research courses, we were allowed to arrange, with Doug Anderson, to do Reading and Research focusing on the arctic archaeology collections at the Haffenreffer Museum of Anthropology.

That suited us fine. After all, the Haffenreffer was the main reason why, after deciding to go to America, we had chosen to apply to do our graduate work specifically at Brown University. We knew it housed some of the key collections of Alaskan archaeology: much of the material from the excavations of J. Louis Giddings and Doug Anderson. Jarmo at that time was already a specialist in Inuit archaeology and anthropology, alone in his field in Finland, whereas I had done most of my fieldwork in the subarctic region of northernmost Finland and was looking for comparative material and more information on the Arctic as a whole.

So that fall we started our weekly excursions to Bristol. Not having yet purchased a car, the trip itself was an adventure: the closest bus line went through Bristol and we had to walk 2.5 miles from the bus stop to reach the museum. I had a special interest in lithics and had excavated a rare site with abundant evidence of bifacial arrowhead making in northern Lapland, so my research topic was the Old Whaling biface technology. Looking back now, I really understood very little of it then, but that research came in very useful a few years later, when I was to write a study about my Lapland site to submit as a licentiate thesis for the University of Helsinki. 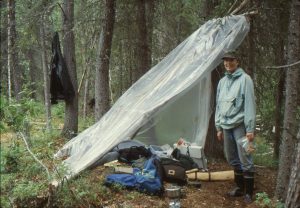 Field camp at the Tautittinna site, an early historic miner’s cabin on the Kobuk River, Alaska, 1993.

After that first fall term, the Haffenreffer became the base of a lot of our activities at Brown. In the summers of 1992 and 1993, we accompanied Doug Anderson to fieldwork in Alaska, on the Kobuk and Selawik Rivers. We spent much of the following winters at the Haffenreffer’s Laboratory for Circumpolar Studies doing the post-excavation work: cataloguing the finds, making inked versions of the field drawings, as well as some artefact drawings, preparing dendro (tree-ring) samples, and doing faunal analysis. The Circumpolar Lab has very good comparative animal bone collections and we spent many delightful hours and days identifying bones and learning about osteology and the anatomy of mammals and birds.

It was the first time either of us had done osteological studies and I remember we had problems with two particular sets of bones. One was a slender bone we identified as an ulna, but at first could not figure out which animal it came from. It was fairly small, very light, and seemed hollow, so we spent a lot of time going through the bird bones in the comparative collections for a match. We needed a twist in thinking before we hit the right answer: not a bird after all, but a mammal – snowshoe hare! That discovery was vital for understanding the economy of the Tautittinna site on Alaska’s Kobuk River that we had excavated with Doug. The site was dated to the period of a crash in the numbers of caribou in northern Alaska in the mid-1800s, and one of the key objectives of the excavation was to study the economical choices of the inhabitants: what had they hunted when caribou was not available? Our osteological analysis, done at the Haffenreffer Museum’s Circumpolar Laboratory, told us that the staples at that time had been fish and hare. A similar result has since been reached in Canada, where the term “Fish and Hare Period” has been established.

The other set of bones we had trouble with were some finger bones. At first we thought they might even be human, but we had to abandon that idea. Bear was close, but not close enough. Again, the answer was unexpected: they turned out to be the finger bones of a bearded seal – four hundred miles inland from the Arctic Ocean! That discovery was also vital for understanding the site’s economy and the connections upheld by the inhabitants. Perhaps it was part of a bearded seal scratching tool – one that has the “hand” of the seal tied to a shaft and is used to scratch the ice to fool bearded seals basking on the surface into thinking that the approaching hunter was another seal. It had to originate from the coast, of course, and showed that links in that direction were maintained in the mid-1800s, just the same as today. 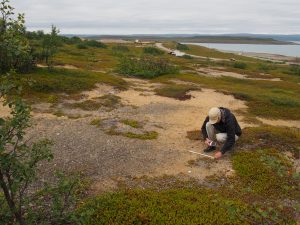 In addition to the research we did on the arctic collections at the Haffenreffer, we also had a course one semester on Experimental Archaeology, in which the Haffenreffer played a vital role. Each participant was expected to design an experiment that was actually put into effect. My experiment was studying the movement of lithic artifacts in a sandy matrix under trampling by humans. I first manufactured the lithics outside the Circumpolar Lab from various raw materials. Then we built a 2 x 2 meter box out of heavy wooden planks and filled it with sand. The timber and sand were provided by the Museum, as the sandbox was meant later to serve as an archaeology play box for children visiting the museum. The idea was to hide “artifacts” in the sand and let the children excavate them from it.

The box was placed behind the Circumpolar Lab building. We spread the artefacts I had manufactured in the sand in two layers with sand between and course participants spent several hours marching up and down the box, churning the lithics in the matrix. It was interesting to see that during the trampling the flakes moved both up and down in the sand, sometimes surfacing, and then disappearing again. Finally the box was excavated and the locations of the artifacts were recorded three-dimensionally. This experiment resulted in a paper that was later published. The research played an important role in understanding site formation processes. For example, the result that any artefact trampled in that kind of a matrix does not move more than about 12 centimeters vertically is important when studying the formation of open-air sites with thick cultural layers but without any visible stratigraphy.

The Haffenreffer Museum of Anthropology, thus, played a vital role in my education at Brown University. In addition to the memories I just shared, I had the opportunity to take part in constructing an exhibit, thus gaining experience in museum work, as well as to give a public talk to the Friends of the Haffenreffer Museum in a series of student presentations, gaining experience in public speaking. The Museum’s arctic collections are unique and still have so much to give for arctic researchers. For me, the time I spent at the museum offered a welcome break from the books – an opportunity for hands-on work that I cherished then and still do. I hope that this opportunity will be available for future generations of students and researchers, as well.

Tuija Rankama received her Ph.D. from Brown University in 1996 for her thesis entitled Prehistoric Riverine Adaptations in Subarctic Finnish Lapland: The Teno River Drainage.  She is currently a Principal Investigator and Adjunct Professor of Archaeology at the University of Helsinki, Finland.