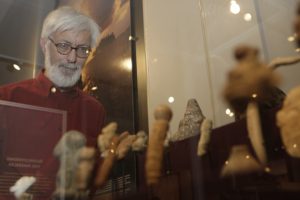 The Haffenreffer was built on the collections of two earlier museums: not only Rudolf Haffenreffer’s King Philip Museum, of course, with its Native American collections, but also Brown’s nineteenth-century Jenks Museum, rediscovered just as Mr. Haffenreffer’s museum came to Brown. The museum we know today rests not only on the Native American collections Haffenreffer collected in the first half of the twentieth century, but also on miscellaneous curiosities and Smithsonian gifts acquired by John Whipple Potter Jenks and on the European prehistoric collections acquired by Alpheus S. Packard in the late nineteenth century.

On those foundations, J. Louis Giddings invented the new Haffenreffer Museum of Anthropology by adding Alaskan artifacts from his archaeological investigations. Later curators and faculty have built in new directions. Dwight Heath’s scholarly work and collecting prowess shaped collections from South and Central America. Barbara Hail expanded the Native American collections with her remarkable eye for aesthetics and narrative. Thierry Gentis’s work is represented by noteworthy African collections. Dozens of students brought in artifacts based on their fieldwork. Donors, of course, shape the collection almost as much as curators: Mark Rapoport’s North African and Vietnamese collections, Vincent and Margaret Fay’s Taino collections, and so many more. The museum is shaped by its history of collecting, by its curators and donors.

To return to that archaeological metaphor: it’s not quite right. Archaeological depositions are generally accidental, and museum collections are, for the most part, intentional. But the metaphor of archaeological discovery through excavation does capture something of the thrill of discovery for museum staff, as they dig deeper into the stratigraphy of the collections. When I became director of the Haffenreffer I was treated to what I now realize as the trademark Gentis–Smith tour of the Collections Research Center. Cabinets would be opened, revealing Cashinahua feathers here, Acheulean hand axes there. The intent was to wow, and it succeeded. There’s so much here! Subsequent tours would reveal new layers of collections: an attic full of projectile points, the Circumpolar Lab’s collections…. Exploring the storerooms—opening cabinets, looking deeply at artifacts stored by type, long rows of masks or textiles or moccasins, finding new things—is one of the great pleasures of being a new museum curator or director.

But museums are more than layers of artifacts, more than a browsing-room for curators. The great challenge is to mine those layers (an unfortunate metaphor), to reveal connections across collections, to discover new stories and new ways of telling stories. Knowing the history of how those collections came to be helps to make sense of them, to make them more useful, to build on their strengths and to work around their weaknesses, to explain them to the museum’s visitors and researchers.

My most recent visit to the museum, to admire the new exhibit, took me, as well, to CultureLab. It seems I always end up in CultureLab when I visit. CultureLab cuts across collections, offering insight into what objects are being taught with now—how faculty and students are mining those layers. Museum artifacts can come with one story; as they stay, and are put to use, they reveal new stories. The contrast of CultureLab with “Northern Horizons, Global Visions,” across the gallery, as well as across the timespan of the museum collections, from collecting to classroom use, offers an exquisite perspective on the value of collections: the way they are always historical, and at the same time always made new.

Steven Lubar is Professor of American Studies, History, and History of Art and Architecture at Brown University. He was Director of the John Nicholas Brown Center for Public Humanities and Cultural Heritage, 2004-2014, and Director of the Haffenreffer Museum of Anthropology, 2010-2012. Before coming to Brown, he was Chair of the Division of the History of Technology at the Smithsonian’s National Museum of American History.