Alexander Dolitsky with Chukchi community members at the village of Lorino, Chukotka, 2008.

I was a graduate student at Brown University from 1980 to 1983, earning an MA degree in Anthropology in 1983. While I was at Brown, I was given an opportunity to work at the Haffenreffer Museum of Anthropology under Ruth (Bets) Giddings and at the Circumpolar Laboratory under Douglas Anderson. Both institutions are located in close proximity to each other in a secluded and picturesque area near Bristol, R.I. 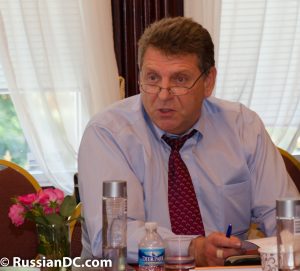 Alexander Dolitsky at the Russian embassy in Washington, DC, summer 2016.

During 2 academic years, I spent many hours cataloguing and analyzing Brown’s Circumpolar and Arctic archaeological collections—one of the finest in North America. At the Haffenreffer Museum, I also catalogued and analyzed Mesoamerican pottery, mostly well-preserved ancient Maya and Aztec vessels. In the 1970s, as a member of the Institute of Archaeology of the Ukrainian Academy of Sciences, I excavated ancient Greek and Tripolye settlements in the former Soviet Union. That field and laboratory work in the former Soviet Union helped me with handling the pottery collection at the Haffenreffer Museum. Nevertheless, I frequently asked Bets Giddings numerous questions related to methods and techniques in describing, measuring, and cataloguing the museum’s artifacts. Ms. Giddings was always available and patiently answered my questions, explaining the museum’s procedures. Sometime her colleagues at the museum joked about her “…going back to school again” because of my continuous questions about the museum’s collections. In response, she just smiled.

Every experience, whether it is good or bad, leaves a mark on people’s lives. My experience at the Haffenreffer Museum, and at Brown in general, taught me valuable lessons about American anthropology that were distinctly different from my past academic and field experiences in the former Soviet Union.

Alexander Dolitsky received an M.A. in History from Kiev Pedagogical Institute, Ukraine, in 1976, his M.A. in Anthropology at Brown in 1983, and attended the Ph.D. program at Bryn Mawr College from 1983-85. He was the U.S. Forest Service archaeologist and social scientist in Alaska from 1985-87, then Social Studies Instructor, Alaska Department of Education (1988-2006); Adjunct Assistant Professor of Russian Studies and Archaeology, University of Alaska Southeast, Juneau (1985-1999); President, Alaska–Siberia Research Center, Juneau (1990 to present).