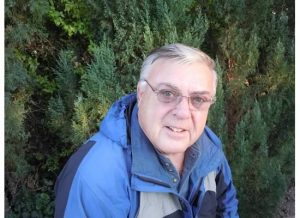 I arrived at Brown University in the fall of 1972 after driving an old truck from Fairbanks, Alaska, down the Alcan Highway and across Canada to Providence.  I made the journey with my future wife, Mim Harris. I had just finished my Master’s degree at the University of Alaska and a Marshall Fellowship at the National Museum of Denmark in Copenhagen the previous year. My journey to Brown University followed the path of Louis Giddings, a renowned Arctic archeologist and first director of the Haffenreffer Museum.

I had come to Brown to study under Douglas Anderson, whom I had met three years earlier when I was an undergraduate student excavating at a site in interior Alaska. Doug had worked closely with Louis Giddings prior to his death, and had inherited the very difficult task of completing Giddings’ vast unfinished research while at the same time carrying on his work in Alaska and Thailand. I could not have had a better or more patient teacher and mentor than Doug Anderson. He tolerantly guided me through the labyrinth of graduate school and introduced me to a level of academic rigor I had not experienced until that time.

Soon after my arrival I discovered that the Haffenreffer Museum and grounds at Mt. Hope Grant were a sanctuary from the traditional academic structure of the Brown campus. It was here that I met Jane Dwyer, Barbara Hail, Wanni Anderson, and Betts Giddings. Jane was the director of the Museum, who taught museum studies classes and introduced me to a new level of museum professionalism. Barbara was a dedicated curator who focused on Native American material culture.

Wanni Anderson is a folklorist and outstanding scholar in her field, as well as being the loving and supportive academic partner and spouse of Doug Anderson. Wanni would patiently tolerate hours of, what must have seemed to her incredibly long and boring, conversations between Doug and me about arctic archeology outside of class.

Betts Giddings was one of the kindest and most gentle people I have ever met. She continued to live in the large main house on the Haffenreffer estate where she and Louis had made their home. She had converted the servant’s quarters into a rental apartment that she generously offered to rent to us and that is where Mim completed her Ph.D. dissertation for Northwestern University. We were married in Bristol, and Betts hosted a wonderful reception for us in her home that was attended by Doug and Wanni and many of my fellow graduate students. Mim and I have now been married for 43 years. The Haffenreffer Museum not only had a profound impact on my intellectual life and career, but it is deeply imbedded in our personal experiences and history as well.

Throughout my career as a museum-based archeologist, I have gained a deep appreciation for the importance of university museums in higher education. As centers for experiential learning, stewardship, and social responsibility, they are a precious and unparalleled educational resource for students. They characterize the best universities in the United States. The Haffenreffer Museum embodies this level of excellence, and contributes to Brown University’s ranking as one of the finest Universities in the nation.