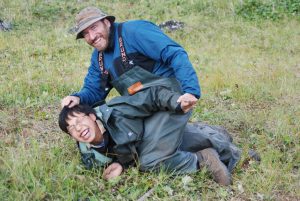 I arrived at Brown in 1991 to pursue a Ph.D. focused on anthropological archaeology, with the expectation of a career as a professor following my interests in arctic prehistory. I was focused on the typical academic career track of research and teaching, but had not really given much thought to the public value of my work or how it might actually benefit modern society. In other words, I was intent on making my research only relevant to the very small handful of academic researchers with similar interests. My time at the Haffenreffer Museum of Anthropology changed all of that and altered the arc of my career in subtle and not so subtle ways.

As a graduate assistant, I worked to help the museum comply with the then newly passed Native American Graves Protection and Repatriation Act, helped teach a course on exhibiting other cultures in the museum, and helped to prepare docents to lead programs about Native Americans in Southeastern New England. The common thread in these activities, in the Haffenreffer more broadly, and in education at Brown more broadly still, was and is the public purpose of what we do. My time at HMA showed me in a very real way how museums can be a critical point of articulation between academic research and the broader society.

My experiences at HMA kindled an interest and concern for how we communicate what we know through science with the interested public, how we ensure that our interpretations are correct, and how we help the public to understand not just that what we say is true, but how we come to believe it, and how we test those beliefs through ongoing rigorous research. These concerns are now more relevant than at any time in the Museum’s or the university’s existence, and they have continued to occupy my attention in the years since I graduated.

After a post-doctoral fellowship at the Smithsonian Institution, I accepted a position as curator and professor of archaeology at the University of Alaska. There I was able to pursue not just archaeology, but museum archaeology – research, publications, and exhibitions that actively engaged students by using the museum’s collections to learn new things about the past and share them with the public. I was able to help people whose appreciation for prehistoric art and artifacts was largely aesthetic to understand them as manifestations of sophisticated knowledge of engineering and mathematics.

After receiving tenure – the carrot dangled in front of every newly minted professor – I took a job with the National Park Service’s headquarters office in Washington, D.C. because I felt it would give me an opportunity to make a positive difference at a much broader scale than was possible working one-on-one with students, publishing on obscure but interesting topics, and designing exhibitions in a small museum in an out-of-the-way corner of the country. Those concerns of relevance, scholarly integrity, and public benefit continue to run through the work I do every day as a public servant, and they are concerns I first began to wrestle with at the Haffenreffer Museum of Anthropology.