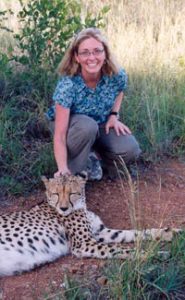 I came to Brown in 1992 with undergraduate degrees in Africana studies and Sociology & Anthropology – I knew I was going to work in the African continent for my dissertation fieldwork and was interested in gender and health – but my interest in African arts and museum studies in general were sparked by my work at the Haffenreffer Museum of Anthropology and the collections opportunities I received.

During my time at Brown (1992-1999) I focused in medical and demographic anthropology and conducted my fieldwork in southern Africa, and in Botswana in particular.  My research is on HIV/AIDS and fertility and I have continued this work for over the past two decades.  What was clear from the very start of my work was that one of the best ways in which I could learn about the community, about the ins and outs of everyday life, of intimacies and lives was through learning what women do.  In northern Botswana this meant learning about basket making. 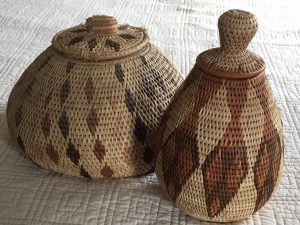 Baskets in Botswana were traditionally woven for everyday use and carried messages reflective of Tswana beliefs and values.  As globalization has shifted the market in tourism-dependent Botswana, women who are responsible for the production of baskets have entered a new and expanded market economy where locally made baskets carry Tswana symbols and meanings into international contexts and construct and contest the idea of sustainability and gender ideology.  Closed (lidded) and open (bowl or dish like) baskets take a considerable amount of time to craft and for many women, making them was a communal activity, and one I joined as a kind of ethnographic apprentice (fortunately for readers of this blog, I have not included any photos of my own baskets!).  I received a grant from the Haffenreffer (many thanks to Shep Krech and Barbara Hail who believed in expanding the collection) to purchase baskets from Botswana and ultimately to curate an exhibit based upon them.  Not only were the baskets beautiful and fun to buy, they represented innovative ways in which women were engaged in economic strategies that were largely invisible.  In my dissertation work back then, talking to women making baskets helped facilitate my knowledge of sexual behaviours and fertility fears, giving me richer, more in depth, holistic knowledge.  I always tell students today that the great strength of anthropology is that you are gathering the most complete, holistic picture of a place or a problem – by learning about baskets, I learned about life and gender in the village and vice versa.

At the Haffenreffer, I also had the opportunity to work with Rip and Thierry, (both of whom taught me most everything I know about display, building innovative cases and writing good text!) to put together an African Art exhibit using the William Brill Collection.  Twenty years later, I actually still have the glossy brochure that we wrote and created tacked on my bulletin board in my office today! 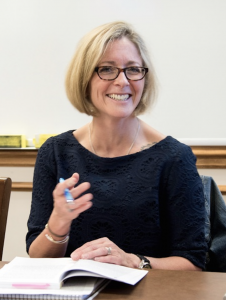 I’ve continued to work with material culture and African art in particular throughout my academic career.  At DePauw University I developed and teach an African Art and Museum Studies course where undergraduates design a virtual museum online using the primarily African based ethnographic collection.   I’ve co-taught a course, an introduction to Museum studies with our Director of Museums here on campus and I regularly ask students to think about how and why we ‘see’ certain objects and peoples as symbolic of particular ideologies, across time and space.  I teach African cultures classes, museum studies classes and public health classes that all rely upon the use of visual interpretation of objects and images in addition to academic literature and discussion in order to do so. I’m fortunate to teach at a University now where we have galleries and facilities on campus that encourage student learning through ethnographic objects and visiting installations.

There is no doubt in my mind that teaching and learning involves all of the senses. While I had long been interested in cultural resources, preservation of objects, and notions of display and interpretation (my mother was the former director of the Alcott House museum so I suppose it was ingrained!), it was at Brown that my academic curiosity in African art and artifacts had the chance to flourish.  I am grateful to the Haffenreffer Museum and those who worked with me because of the tremendous impact that those experiences have had not just on my own academic trajectory but on that of generations of my own students in the 21st century.  I look forward to the day that we see Brown students, both graduate and undergraduate, with even greater exposure and opportunities to think about global cultures through ethnographic objects and art on campus.

Rebecca L. Upton is a medical anthropologist and public health practitioner. She received her Ph.D. in Anthropology from Brown in 1999 and an M.P.H. in Prevention Science from Emory in 2014.  She is the first female anthropologist to be Full Professor in Sociology & Anthropology at DePauw University.  She publishes widely on issues of gender, health and development in Southern Africa and is the author of What Would Jesus Haul? Work, Family and Identity Among Christian Long Haul Truck Drivers.  One of her next books is on the baskets of Botswana, Women’s Livelihoods and Gendered Resistance in Botswana and is a direct result of her work at the Haffenreffer Museum of Anthropology at Brown University.