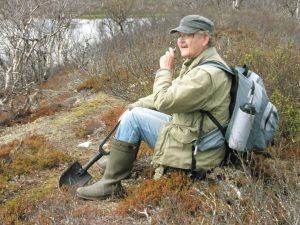 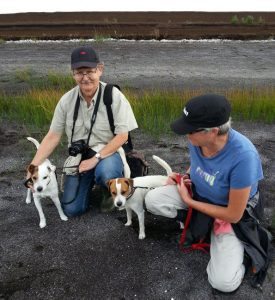 With Tuija Rankama and our Jack Russels Sepe and Vinski at the Rönneholm Bog Mesolithic site, Scania, Sweden in 2013 (photo: A. Sjöström)

After my first year at Brown, I served as museum proctor at the Haffenreffer for a total of six semesters. My duties included gluing together a number of broken pots, and measuring, photographing and drawing a mystical half of a dugout boat, but the longest job I had as museum proctor involved identifying, arranging, and repacking Rudolf Haffenreffer’s archaeological collections. This project had been begun by David Gregg, who had built an ingenious pulley-and-tray system in the attic of the barn for arranging and moving the large and heavy finds, but I began with the small stuff that was mostly in small wooden trays (built specially for Haffenreffer by the Herreshoff Yacht Company, which he also owned) with sagging bottoms. As these trays were slowly disintegrating and as their size made it difficult to mark contents information on the outside, I decided to move the finds to larger cardboard trays with covers and a batting liner to keep the contents in place. Unfortunately, boxes were available in bulk only in unfolded form and batting in large rolls, which meant that a notable part of my time went into assembling—first by stapling, later by hot-gluing—a large number of boxes and cutting the batting to size.

Working up in the unheated, un-air-conditioned attic was a rather extreme experience: during the winter, the temperature was frequently near or even below freezing and I had to wear hat, sweaters, gloves, and heavy-duty long johns and go below to warm up every hour or two, while during the summer I frequently worked in swim trunks. The collections themselves were quite a mess, which is not surprising since Rudolf Haffenreffer bought most of his collections from other collectors, some of whom had likewise bought theirs from third parties, and in some cases re-labeled them. Actually tracing all of the finds in the different catalogues was quite a chore, not the least so because part of the artefacts were in the exhibit. Haffenreffer had also had a number of the “nicer” arrow points mounted on boards in tasteful patterns but in such a way that the catalogue numbers were not visible, if present at all. As with the Noatak kayak, previous storage methods produced some problems; there was, for instance, a steel bucket full of quartz artefacts that had lived in the same damp wine cellar with the result that rust from the bucket had covered a number of the finds so thickly that the catalogue numbers were illegible.

This is not to say that the work was boring or tedious—quite the opposite: going through the collections gave me a very good overview of the archaeology particularly of New England but also of other parts of the “lower 48” which I might have otherwise missed since my Ph.D. research had to do with the Arctic. The latter interest was well catered to by the Alaskan collections of J. L. Giddings and Douglas Anderson (my supervisor) housed in the Laboratory for Circumpolar Archaeology downstairs. I was familiar with many of these objects through publications, but being able to see and handle the actual artefacts themselves always tells you so much more; you get a better sense not only of the shape and size but also of weight, sharpness, traces of manufacture and use and a dozen other features that photographs or drawings simply cannot convey. 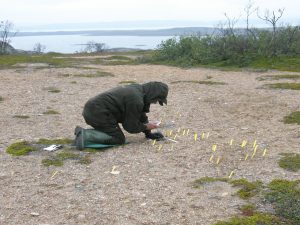 Douglas Anderson’s course on experimental archaeology in the fall term of 1992 offered two interesting projects: the sandbox experiment that Tuija Rankama describes in her memoir and my own experiment on the behavior of burnt bone. The latter derived from the fact that practically all bone found on Stone Age sites in my native country of Finland is burnt because unburnt bone is destroyed by the acid soil. My research questions were, how much could burning deform the bones (thus producing errors in taxonomy, sexing, and aging), was the amount of deformation affected by whether the bone was cooked or uncooked, and how could one distinguish between bone crushed before burning and bone cracked by burning. The raw material for the experiment consisted of a broiler chicken (representing a ptarmigan), a cut of bovine rib cage previously used as a target in Anne Dowd’s experiment on the efficacy of stone arrowheads, and a leg of a white tailed deer provided by Dan Odess and deriving, as I recall, from the first of the annual “Deer and Beer” parties Dan came to throw after the deer season. The bones were prepared in different ways (including grilling with barbeque sauce) and then burned in an open fire I made in a Wampanoag wetu that had been built in the woods behind the barn. 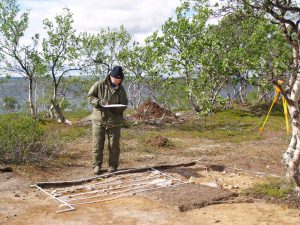 The results showed widely varying degrees of shrinkage in the bones caused by burning, a clear difference between cooked and uncooked as well as defleshed and undefleshed bones, and differences in cracking patterns between crushed and uncrushed bones. The experiment would have served as an excellent pilot for a larger-scale, publishable project, but unfortunately the material was too small and the control of factors such as fire temperature too imprecise for statistically relevant conclusions. One useful fact, however, did arise from the experiment that required no statistics: mammalian bones, particularly thick leg bones, burn with a hot flame and no observable smell or smoke, suggesting that burning bones in the fire as practiced by Stone-Age Scandinavians and others may have had practical advantages in addition to (or instead of) the ritual motives previously suggested by archaeologists—including myself. 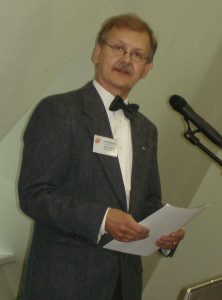 Giving a paper at the II Northern Archaeology Congress in Khanti-Manshiysk, Siberia in 2006 (photo taken by A. Kriiska)

My connection with the Haffenreffer did not end when I obtained my Ph.D. and moved back to Finland in 1996. In 2001, I was invited to contribute to the catalogue of an upcoming exhibition showcasing the recently acquired Ferdinand Bach collection of NW coast and Alaskan boat models (Kayak, Umiak, Canoe). My task was to be writing descriptions of the models, explaining what the originals were like and where they were found, as well as discussing how the models differed from full-size craft and why. The description part was the most difficult one since I had to work from photographs, not being able to travel to the U.S. in order to view the originals. However, the exercise proved very interesting, not least because it forced me to acquaint myself more closely with the watercraft of the Northwest Coast. It also made me look at boat models not merely as miniature approximations of real full-size craft (as I had in my MA research) but as objects in their own right, with their own traditions and conventions of manufacture, and as reflecting—perhaps even better than the originals—their makers’ ideas of the essence of “boatness” in their own culture context (Model Kayaks, Umiaks, and Canoes from the North Pacific in Haffenreffer Museum of Anthropology Collections).

In short, the Haffenreffer Museum was in many ways an essential—even vital—part of my years at Brown. Although my actual Ph.D. research did not end up directly involving the museum’s collections, the work and research that I did at the Haffenreffer served to widen my field of experience and knowledge in both archaeology and cultural anthropology in ways that have since served me extremely well both in teaching and in research.