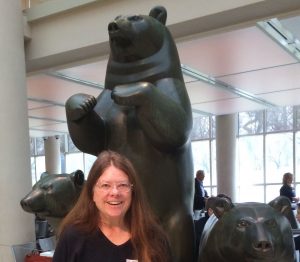 Thirty-five years ago I moved from the Northwest to the Northeast and began a job in the Education Department at the Peabody Essex Museum (PEM) in Salem, MA. I was hired because I was a singer of sea songs and the Museum had a glorious collection of art and artifacts related to New England’s maritime trades. Founded by sea captains as the East India Marine Society in 1799, the PEM was both really old for an American museum and extraordinarily diverse in the geographical range of the collections. Salem mariners went everywhere a ship could go, and the items in their museum reflected that. 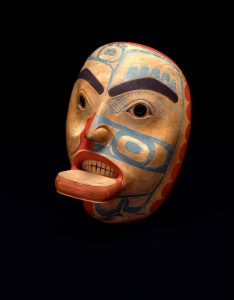 It may seem strange to start an essay about the Haffenreffer in another museum, but it was at the Peabody that I began the voyage that took me to Brown. In the winter of 1982 I encountered a Haida mask of a woman’s face at the PEM that became (and still is) the central artifact in my life. It may be that homesickness and uncertainty about my move were part of what drew me to an object that originated on the Northwest Coast, but my first encounter with that mask was powerful. It is a magnificent work of art, expertly carved and painted by a master of the genre. The label said it was collected by Capt. Daniel Cross around 1822 and it seemed to me then a very early date for someone from Massachusetts to be on the coast of British Columbia. In my third year at the PEM, I began working part time on a Master’s degree in American Studies at Boston College, and wrote a thesis about the Northwest Coast Indian objects at the PEM that had been collected by New England mariners in the late eighteenth and early nineteenth centuries. I left the PEM in the fall of 1988 to pursue a Ph.D. in American Civilization and a Master’s degree in the Museum Studies program at Brown.

Okay, I know that by the third paragraph of this essay I really need to be talking about the Haffenreffer and it now enters the story. It took me some time to figure out the angle I wanted to take in my dissertation. I knew I wanted to talk about voyages to the Northwest Coast from New England, about interactions between American sailors and Northwest Coast Indian people, and about the objects that were brought back by mariners to fledgling museums in the Boston area. Among the students I met at Brown were several working on doctoral degrees in Anthropology, including Ann McMullen and David Gregg, who I met in courses and lively conversations at the Haffenreffer. Eventually I realized that what I was most interested in was the context in which objects were collected, rather than (for instance) their meaning and use in the communities where they were produced. I began to refer to myself as a historian (which I still do), and found that the interdisciplinary structure of AmCiv was a good choice for me.

I think that the Haffenreffer was an unusual Anthropology museum, in that several people there were passionately interested in the history of collections. Shepard Krech, then the Museum’s director, became my dissertation advisor and has been an influential force in my life ever since. In a Museum Studies course that he taught, I had a chance to experiment with making a “cabinet of curiosities” out of items in the Museum’s collection. Barbara Hail, who was always interested in ways of thinking about and documenting Rudolf Haffenreffer’s collection inspired me a great deal.

My dissertation resulted in two books, one on the history of the maritime fur trade, and another that described objects brought back on return voyages to New England: Souvenirs of the Fur Trade: Northwest Coast Indian Art and Artifacts Collected by American Mariners (published by the Peabody Museum of Archaeology and Ethnology at Harvard in 2000 and reissued in 2013). I had a chance to expand on one category of those collections, canoe and kayak models, in two Haffenreffer publications in 2002: Kayak, Umiak, Canoe, and Model Kayaks, Umiaks, and Canoes from the North Pacific in Haffenreffer Museum Anthropology Collections.

The influence of my experiences at Brown and at the Haffenreffer steered me on a path to the Sea Education Association in Woods Hole, where I taught in the interdisciplinary “SEA Semester” program for 25 years. I sailed with undergraduates in the North and South Pacific, Caribbean, Mediterranean and North Atlantic and in each place continued to think about cultural contact and the exchange of goods back and forth. I wrote about this most recently in a book chapter, “Capturing the Pacific World: Sailor Collections and New England Museums” in Global Trade and Visual Arts in Federal New England (University Press of New England, 2014). For the last ten years I have been teaching in the Museum Studies Master’s degree program at Harvard, and I’m currently writing a book on the history of museums.

There are several institutions that serve as touchstones along the path of my life: Lewis and Clark High School in Spokane, Washington; the music department at the University of Washington; the Peabody Essex Museum; and Brown and the Haffenreffer, all influenced me at crucial times. They helped define me as a person, a scholar, and a teacher, and for that I am profoundly grateful.