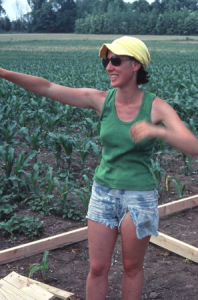 The truth is that I never visited the Haffenreffer Museum while I was a student at Brown (1967-1971) even though I was an anthropology major.  In those days, like most undergraduate students, I did not keep a car in Providence (or even own a car, for that matter) and, as far as I know, there was no other way to access the museum.  It was a kind of “stealth” facility of the university. In fact, I’m rather surprised to discover that this is only the 60th anniversary of the Haffenreffer.  In Fall 2017, I myself will have been a member of the Brown community for 50 years, and I assumed that the Haffenreffer had “always” been there.

If I remember correctly, I first visited the museum during my 10th reunion in May, 1981.  By that time, I had earned a Ph.D. in anthropology, specializing in archaeology, from Washington University-St. Louis, taught for a few years in Illinois, and just finished my first year as a tenure-track professor at the University of North Carolina at Charlotte.  I remember falling in love with the landscape of the museum’s grounds; I found the meeting place of the land and the bay especially appealing.  I enjoyed the exhibits (while recognizing that they were somewhat cramped), and I also visited Prof. Doug Anderson at his lab and was delighted to discover that he remembered me (which he has claimed to do ever since).  I’ve only been back a couple times, during other reunions, and unfortunately I have not yet visited the new exhibition space in Manning Hall.

But, as it has turned out, I must have absorbed something of the Haffenreffer ethos even from the Hill in Providence, for my own career has overlapped in a variety of ways with parts of the culture of the Haffenreffer.  First, I have collaborated with museums since the time of my doctoral research.  I conducted research for my dissertation in the collections of the National Museum of Denmark in Copenhagen, which I now realize was also the location for part of Doug’s doctoral research.  My own research was on the Bronze Age in Denmark; originally I focused on the social and religious implications of a set of deposits known as votive hoards, but over time my interests expanded to consider the metallurgical technology of the finds and the gender implications of the material.  While I never excavated any hoard myself (and, in fact, almost all of them have been discovered accidentally across Denmark over the last 200 years), because the National Museum conserved both the finds and the records associated with their discoveries, scholars have been able to utilize these finds for diverse research for pretty much as long as the museum has existed.  This is one of the key contributions of museums, including the Haffenreffer: preserving information, images, and material culture of the world’s communities for future generations.  In a world of rapidly expanding human populations, global economy, and major construction, all of this would be lost without museums. 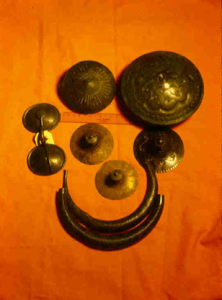 While I have not conducted research on Arctic societies myself, I continued a link to the Nordic areas of the world.  After my trips to Denmark in the late 1970s and early 1980s, I didn’t return to the region until 1998-1999 when I was a Fulbright scholar at the University of Oulu for an academic year.  There, 300 miles north of Helsinki and 140 miles south of the Arctic Circle, I taught Arctic archaeology to visiting American students (a program that Jarmo Kankaanpää also taught in) and American archaeology and archaeological theory to Finnish students (in English, in case you wondered).

When I came to UNC Charlotte in 1980, I was the only professional archaeologist for 50 miles in any direction (it’s lonely, believe me!).  So, drawing on some of my North American excavation experience as a graduate student, I retooled as a southeastern archaeologist.  It was difficult to manage excavations without colleagues or graduate students (which we didn’t have in those days).  So, I teamed up with a small museum about 25 miles away, the Schiele Museum of Natural History in Gastonia, NC.  Like the Haffenreffer, the Schiele was founded with an original bequest from a local enthusiast for natural history and Native American cultures, Mr. Rudolph “Bud” Schiele who worked for the Boy Scouts of America for many years (two individuals of German heritage named Rudolph: is there a pattern here?).  Since the mid-1980s, when the Schiele first hired an archaeologist, the museum and the university have collaborated on excavations at three late prehistoric sites and several early and mid-19th century plantation sites in the region.  We have provided training to hundreds of undergraduate students and introduction to archaeology and prehistory to even more K-12 students through a variety of outreach programs.  Equally important, we have been able to develop a collaborative relationship with the Catawba Nation, a federally-recognized tribe located in Rock Hill, SC, just south of Charlotte.  The strength of this collaboration between a university and a museum lies in community outreach to diverse segments of the community.  Museums like the Haffenreffer, the Schiele, and many others are hugely valuable educational facilities for communities, combining as they do collections, exhibits, and knowledgeable specialists to share information and creativity. 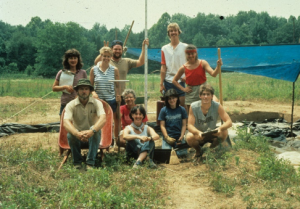 Since my first archaeology course at Brown, with Jim Deetz in the spring of 1972, I have conducted research in museums, taught university students in museums, taught 4th and 5th graders in museums (“archaeology camp”: hardest work I’ve ever done), identified artifacts for members of the public at museum events, and visited museums across North America and Europe.  I congratulate the Haffenreffer on its 60th anniversary, and look forward to the time when its collections can be more fully displayed and its beautiful setting best utilized by the Brown community.