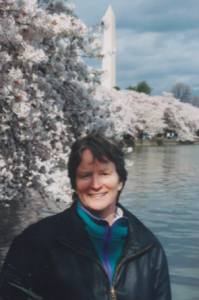 I knew I wanted to be an archaeologist in the 6th grade and actually got to go on a dig when I was a junior in high school in 1970.  There weren’t any archaeological field schools for high school students in those days, but my grandparents found out about one that was “experimenting” with teaching high school kids and sent me to New Mexico (from Connecticut).  I loved it and set my sights on archaeology as my career.  That meant finding a college/university with a good archaeology undergrad program.  Brown quickly became my #1 choice, especially after reading a National Geographic article about the work of James Deetz.

I was privileged to be assigned Prof. Doug Anderson as my advisor when I first arrived at Brown.  He advised me to take more advanced archaeology and anthropology courses my freshman year rather than introductory courses that might bore me.  How thrilling was that!  I also took courses with Prof. Jane Dwyer (director of the Haffenreffer Museum, 1972-83) on the archaeology of Peru and Central America, which were captivating.  We did get to go out to the Haffenreffer to see the incredible Andean textiles she worked on, but that was once.  We must have gone in her car or a bus of some sort since, as Janet Levy noted in her blog, no one had cars in those days so it was hard to get out to the Haffenreffer.  I do distinctly remember going out there on two other occasions that were for an annual spring picnic/party for the Anthropology Department on the grounds of the museum.  What a glorious view on a nice day!

Throughout my four years at Brown (1972-76), I took 18 anthropology and archaeology courses out of 32 including several graduate level courses with Prof. Deetz.  At least one of those involved museum work, with an emphasis on “living museums” like he was working on at Plimoth Plantation.  I don’t remember any courses on the curation of archaeological collections, but I do remember artifacts from various professors’ and graduate students’ excavations that were boxed and stacked on shelves in the lab, in closets, and under desks…for years.

By the time I graduated, I had gotten pretty involved in African archaeology through working with Prof. Peter Schmidt.  We even tried to reconstruct an African iron smelting furnace and smelt iron in a chicken coop in eastern Connecticut.  That was my Honors thesis, which eventually became one of my first publications.  Prof. Schmidt asked me to participate on an NSF grant he received to do work in Tanzania on Early Iron Age iron working, so I did that as soon as I graduated from Brown.  I also applied to 3 very different graduate programs before I left for Tanzania: Boston University for African archaeology; University of New Mexico for CRM (cultural resources management) archaeology; and Cooperstown Graduate Program in Museum Studies.  I really wanted to learn to make potsherds and lithic flakes come alive for museum visitors, although I also really wanted to get a Ph.D. in archaeology.

I ended up going to Boston University (BU) after I returned from nearly a year in Tanzania.  Unbelievable culture shock, but I survived Boston and grad school.  I also returned to Tanzania to continue the archaeological work there for a number of years, usually in the summers. When I couldn’t go to Tanzania, I ended up working for the National Park Service (NPS) on Cape Cod excavating and conducting survey of archaeological sites on the Cape Cod National Seashore.  Pretty soon, but after I had finished all my coursework at BU, I was doing NPS work by day to earn some income and my dissertation work in the late afternoons and evenings on Early Iron Age iron working and ceramics.  I was quite schizophrenic for a number of years!  As the Cape Cod field work wound down, I was involved with a lot of artifact analysis and cataloging to prepare the collections for long-term curation.  Tedious, but interesting work.  My NPS boss asked me to quit the African work, work full-time for the NPS, and switch my dissertation topic to Cape Cod ceramics.  I turned him down since I figured I would never have another opportunity to do all the work in Africa that I was doing and I could always go back to NPS if I needed a job.

A job!?  Well, after getting a Ph.D. with a specialty in African archaeology and the application of materials sciences to ancient metals and ceramics, there weren’t a lot of academic jobs.  I was fortunate to get 3 Post-doctoral fellowships over 7 years, but the salaries seemed to decrease as the cost of living increased.  I needed a real job and guess who was looking in the Washington, DC area where I was on a Smithsonian Institution post-doc?  The National Park Service!  I did go back to the NPS in 1993 and it worked out really well.  I worked in the national-level Archeology Program (note they spell it differently!) and got to work on projects that integrated all the archaeology going on in over 300 different national parks across the country.  Unfortunately, I didn’t get to be in the field, although some of the park archaeologists took pity on me and ask me to help them out every so often.

Within the first couple of years of my NPS job, I was told that I was to focus some of my time on a federal regulation called 36 CFR 79, Curation of Federally-Owned and Administered Archeological Collections.  Not only was I supposed to be able to provide assistance to park and other Federal archaeologists on applying the regulation, but I was to develop a new set of regulations on deaccessioning federal archaeological collections.  “Deaccessioning! You mean get rid of artifacts after they have been accessioned, cataloged, and curated for others to research, interpret, and make exhibits about them?”  That seemed to go against the ethics of being an archaeologist since the artifacts and all the documents created during an archaeological project are non-renewable resources. Once they go away, they cannot be replaced in the exact time and place they were created and found.  However, I also began to do research on the so-called “curation crisis” of archaeological collections and wrote my first article about the situation in 1995.  There was a mess out there and little was being done about it, except by a few.  The collections were being stored in miserable conditions with no security to protect them, there was virtually no funding to support their care and use, and there were very few professionally trained curators to manage them.  I decided that one of the things I could do about that was to begin educating my colleagues about the “crisis” through publications, training, and any other means we could think of.  I wondered about deaccessioning as being part of the “solution” but decided that could only happen with lots and lots of checks and balances around it.

Two things happened in the late 1990s – early 2000s.  First, I was asked by the Society for American Archaeology to chair a newly formed Committee called the Committee on Curation, latter called Committee on Museums, Collections, and Curation.  I did that for 6 years during which we wrote an edited volume on the ethical responsibilities for the long-term care of collections in 2004, organized sessions on collections at the annual SAA conference, and presented ideas to the SAA Board of Directors on things the SAA could do to mitigate the “crisis”.  The other thing was that my colleague and friend Lynne Sullivan asked me to co-author a book with her on curating archaeological collections to which I immediately said yes!  We wrote the first book on the topic for American archaeology, Curating Archeological Collections: From the Field to the Repository, which was published in 2003 (available on Amazon.com).

I have been fighting the cause ever since.  I finally got to really buckle down on drafting the deaccessioning regulation in 36 CFR 79 beginning in 2005.  Unfortunately, there is a Federal government bureaucracy out there, along with other factors that slowed down progress, so it took almost ten years to get the regulation published as proposed.  We are still trying to finalize it so it can be used by Federal archaeologists, but it might take another year or so.

I also switched jobs in 2007 to go to my current position as the Manager of the Department of the Interior (DOI) Museum Program.  My tiny office has oversight of the over 195 million museum objects and archives managed by ten DOI bureaus and offices, including the National Park Service, Bureau of Land Management, Bureau of Indian Affairs, and Fish and Wildlife Service. We write DOI-wide policy on caring for and documenting museum collections of all kinds.  Archaeological artifacts and the records associated with an archaeological investigation, including the field notes, make up the largest discipline that we manage.  Interestingly, many of the DOI collections are housed by non-Federal museums and university departments.  We estimate that over 23 million objects and archives are housed for us by over 800 non-Federal partners.  Guess what – the Haffenreffer is one of those!  The collections of Louis Giddings and Doug Anderson, which were excavated in Alaska on NPS lands are actually owned by the NPS but are curated by the Haffenreffer staff and researched and, hopefully, used in exhibits by Brown University students and faculty.

So, what goes around, comes around.  My interest in museums and archaeological collections was first stirred when I was at Brown.  I took a long detour while working on African archaeology for more than 15 years but I certainly was aware of all the problems that could incur when collections were improperly curated over time.  We definitely had such problems with our collections housed in Tanzania.  Once I started working for the NPS again, I got firmly involved in archaeological collections care and preservation for the benefit of researchers and the public alike.  Now, I work with museums and repositories all over the country to ensure that the Department of the Interior collections are well cared for, cataloged, and well used and researched.  That’s where I come back to the Haffenreffer and working with the staff there on the NPS collections.  I just wish I could go up to Rhode Island to meet with and work more directly with everyone again and see that wonderful view from the Haffenreffer grounds!  Budget…