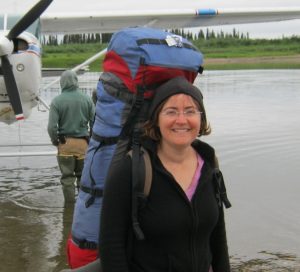 It is not an exaggeration to say that the Haffenreffer Museum and its Circumpolar Lab, housed within the museum complex on the Grant of Mount Hope, changed the course of my life. I arrived at Brown after a summer learning about glacial mechanics and our warming planet through the Juneau Icefield Research Program. It was there that my appreciation for the plants and animals that thrive in very harsh conditions and the beauty of those conditions themselves was fostered.

Happily completing the requirements of my Geology/Biology degree, I took a Field Biology class with Professor Douglass Morse which was to be my first exposure to the Grant of Mount Hope. We explored the flight of maple seeds, and soon the vibrant community at the Haffenreffer quickly drew me in. An opportunity to excavate at an archaeological site in Baffin Island with then grad student Dan Odess brought the wonder of the Arctic to another level, and I quickly added Anthropology to my plan. 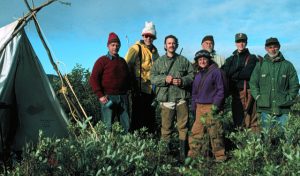 The crew in 1995, Doug, in the back, standing behind two undergraduate students that he brought to the Arctic.

At the center of that path was the Circumpolar Lab’s Director, Professor Douglas Anderson, who opened his fieldwork in Northern Alaska and his lab in Bristol to me and many others. His willingness to include undergraduates in countless years of archaeological fieldwork enabled us to learn about and experience the strength, creativity and humor of people we would otherwise never have known.

All the while, the Haffenreffer supported and enriched my studies and life in countless ways. From pottery firing demonstrations behind the barn by Southwestern artists brought in by Barbara Hail, to a class designing an exhibit of Peruvian Cashinahua objects with input from the collector, Ken Kensinger, to the docents teaching school children in the barn, and the visitors I greeted as a weekend ‘guard’ who came to honor the life of Metacomet, Mount Hope was a dynamic, interesting and multicultural experience.

I was there often, as the faunal remains that I analyzed for my senior thesis were in the Circumpolar Lab. Since I didn’t have a car it meant that I had to arrange to get a ride from a graduate student or take the bus and get a ride from the stop from a museum employee. Trips were intentional and the process bred camaraderie. I remember very fondly sharing car rides with Dan Odess and David Gregg, and lunches with Rip Gerry and Thierry Gentis, talking about museums, collections and archaeological theory. 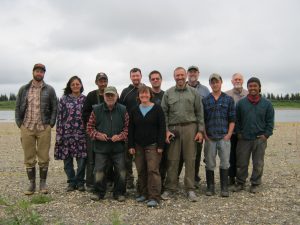 The crew in 2013, Doug, still in the back, standing behind two undergraduate students that he brought to the Arctic!

I still do archaeological fieldwork in Alaska. I am now employed at the Yale Peabody Museum – working to be half the inspiration that Doug was to me!  I consider myself extremely lucky to have been a part of that community, and it saddens me that current students can’t have the same experience. I wholeheartedly hope that the Grant of Mount Hope once again reaches its potential as a vibrant hub for scholarship, cultural sharing and appreciation of the land and the past.