As an Arctic Archaeologist, the Haffenreffer Museum in Bristol was a special place of discovery for me. I came to Brown University in 1999 to complete a PhD degree in Anthropology with renowned Arctic Archaeologist, Doug Anderson. I had just finished up a Masters in geology at the University of Alberta, where I studied site formation processes affecting an archaeological site in the northern Yukon. I was eager to continue my explorations in the Arctic and had just finished reading Louis Giddings’s “Ancient Men of the Arctic” when I stepped off the plane in Providence. I was accompanied by my younger brother, Paul, who was coming to Brown for an undergraduate degree and to play on the Brown Men’s Hockey team. 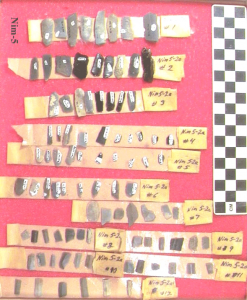 On our first visit to the Haffenreffer, Doug led us into the “barn” where the arctic treasures were kept. There were drawers and drawers filled with microblades affixed to masking tape, Arctic Small Tool tradition end blades, Northern Archaic scrapers, and fire-broken Kayuk projectile points. During one memorable semester, Doug taught a small group of graduate students a private course in Arctic Archaeology. The barn was our classroom. We would carpool out to Bristol from Providence, enjoying a peaceful drive through the country. When we arrived we would pour over the artifacts in the drawers, examine delicate pottery preserved in paper bags, and wonder at the ancient radiocarbon samples to be found in the stacks of soil samples. Doug would relax and impart years of experience, memories, and wisdom concerning the ancient people living in the Brooks Range of Alaska. When the light started to dim in the barn we would pack up our notes and head to a local pub for Doug’s favorite meal, a burger and a pint.

The Haffenreffer was a place where we could study stone-tool technology, listen to lectures by visiting archaeologists, and imagine the journeys of both our archaeological predecessors and the people that created the sites we studied. One day, I gave a lecture at the museum about my research on the Northern Archaic in northwest Alaska. My parents were visiting that week and my dad turned the questions about the artifacts posed by the local public to encounters with bears and my safety in field conditions. Once, I attended a wedding on the lawn outside the Haffenreffer overlooking the ocean. The Haffenreffer is a place of many warm memories for me, both scholarly and personal.

I resided in Providence for three years. I spent summers in Alaska, following Doug Anderson’s footsteps around the Brooks Range, before moving full time to the north. I have now been living in Fairbanks, Alaska, for fifteen years. I am the archaeologist for the Army in interior Alaska and manage archaeological sites on 1.5 million acres of land. I am married to another Arctic Archaeologist who manages and conducts field work in Gates of the Arctic National Park and Preserve. We have two young boys that frequently find themselves touring sites and participating in excavations.

I think back frequently about my years at Brown and my studies at the Haffenreffer. My graduate education expanded my world to new experiences, new tastes, and new ways of thinking. I will always fondly remember exploring the Haffenreffer collections, touching prehistoric artifacts, and musing on the ancient people that must have made them.