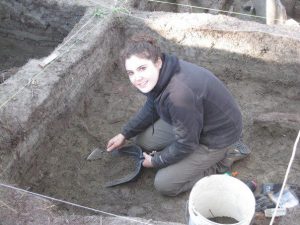 In the summer of 2010, I helped to extract the left distal humerus of a woolly mammoth from a layer of permafrost in the remote arctic tundra along Alaska’s Kobuk River. That same week, my team uncovered the remains of two human skeletons beneath a collapsed wooden structure just meters away. Peri-mortem fractures suggested a struggle. I camped for weeks along the river in the wilderness with only a handful of other students and archeologists. We had no electricity, no internet, no iPhones. The sun lingered high in the sky all day and all night. Some days it rained so hard I blended in with the mud. I was polka-dotted with mosquito bites. I learned to sleep with an eye mask to block the constant sun and bear spray tucked under one arm. I learned not to spray bear spray into the wind. I learned how to excavate fragile artifacts and bones with precision, how to live in the wilderness (with the help of a camp guide, candy, and tents provided by the NSF). I learned to chop a tree. I developed a vague sense of direction without my beloved GPS. While these may seem like minor accomplishments (or in the case of bear spray, common sense), prior to this excavation, I’d never even slept in a tent. 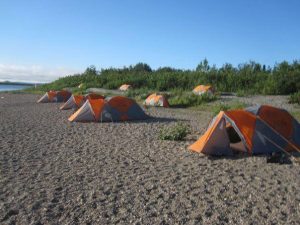 Camp along the Kobuk River.

During my time at Brown, I was offered the opportunity to work as a faunal analyst and to aid in an excavation of prehistoric remains through the Haffenreffer Museum’s Circumpolar Laboratory and Brown’s Arctic Studies program within the Department of Anthropology. These opportunities presented themselves after I had participated in a few anthropology courses that I had unwittingly signed up for as adjuncts to my classic pre-medical track. Although I had no prior experience, I was drawn to osteology and had a mentor, Douglas Anderson, who took me under his wing without reservation. He provided me with osteology books and set me up with a colleague who would train me in techniques to identify animal bones to species. By the end of a two-year period, I could identify the left distal tibia of an arctic hare without blinking, and had memorized the skeletal features of countless North American birds and mammals. Even now I can close my eyes and imagine the feel and texture of a seal metacarpal or a ptarmigan (arctic bird) humerus. Through my research, I was able to travel and collaborate with faunal experts from esteemed institutions including Harvard and Yale. I spent so much time in the Circumpolar Lab that the Haffenreffer Museum ultimately hired me on an NSF-funded project to help rehouse the faunal collections from J. Louis Giddings’ excavations that had been untouched for years. I spent a summer identifying, sorting, and organizing thousands and thousands of bones from previous archaeological investigations. 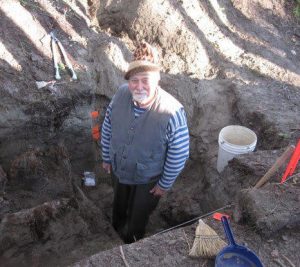 While I ended up ultimately pursuing a career in medicine, my experiences studying Arctic Archaeology, excavating, and working at the Haffenreffer Museum molded me as a person and as a doctor. I transformed into a confident, independent learner. I found that I had devoted so much time and concentration to teaching myself the morphological subtleties of bone fragments that memorizing obscure diseases and pathologies felt relatively straightforward. Nothing teaches you attention to detail and patience like trying to identify bones so small that you have to hold them with tweezers. Prior to my work with the Arctic Studies program, I struggled with significant anxiety and procrastination when taking on unclear tasks or roles I wasn’t sure I could do. Through these experiences, I became confident in identifying and developing the skills I need to solve novel problems. Working in a large city hospital now, I care for patients with complex, unusual diseases and challenging social situations. I approach these cases with the confidence and meticulousness I developed during my time doing anthropology. 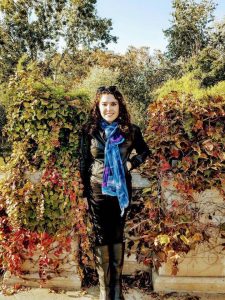 In working with Douglas Anderson, I witnessed the lifelong dedication that he and his partner Wanni Anderson invested into their research in the Arctic. Over many years, they earned the respect of the Iñupiat residents, who in turn entrusted our team with their oral histories and permitted us to excavate on their sacred land. In some ways this has served as a model for my approach to caring for patients. I realize that creating long-term relationships with patients requires patience, mutual respect, and a directed effort to truly understand their personal experiences. Like an anthropologist, I try to avoid assumptions or judgments and remind myself to listen. I consider the environmental, social, and political forces that subconsciously guide my patients’ decisions and beliefs, adjusting my interventions to their specific needs as best I can. I am incredibly grateful for having stumbled upon Arctic Studies and the Circumpolar Lab of the Haffenreffer Museum—truly hidden gems at Brown University.