Exploring a Neolithic chamber tomb with Viking runic inscriptions at Maeshowe, Orkney, during a break from presenting papers at the St. Magnus Conference, April 2016.

My experience with the Haffenreffer Museum can be divided into two stages: In 2002 I was a new mother, newly arrived in the United States from Canada, accompanying my husband, Kevin Smith, as he started his new job as Deputy Director of the Haffenreffer Museum of Anthropology at Brown. At the same time, I was finishing up my PhD in Archaeology through the University of Glasgow and working on a book based on my doctoral research that was published in 2004. 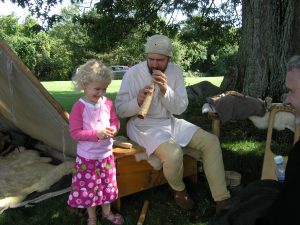 Our daughter, Emilie, at age 4, shares a laugh, a sound, and a rich learning experience (along with 1,500 visitors) at the Museum’s 2006 festival, “The Vikings are Coming!” on the Museum’s grounds at Mount Hope, Bristol, RI.

I remember the Haffenreffer and the programs it held in Bristol during those years very fondly. They helped to ease me into my new life in this country. I spent many a weekend in Bristol at the Museum with my baby wrapped in a Maya sling, glued against my body, enjoying a multitude of activities that the Museum’s staff organized: from Malian mud cloth painters to Wampanoag storytellers; Viking festivals with re-enactors, activities for all ages, and talks by some of the biggest names in North Atlantic archaeology; as well as lectures and events organized around all manner of things anthropological. 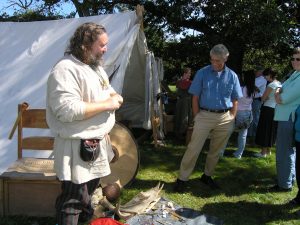 William Fitzhugh, Curator of Archaeology and Director of the Arctic Studies Center at the Smithsonian Institution, talking with Canadian re-enactor and archaeologist Neil Peterson at the Haffenreffer’s 2006 festival “The Vikings are Coming!”, funded by the Rhode Island Council on the Humanities.

Occasionally, after the Museum opened its gallery on campus in 2004, rich cultural events would take place on the Brown campus – with Tibetan Buddhist monks creating a Mandala in Manning Hall, or a Haitian Vodou priestess performing a ceremony in the Museum’s exhibit space. These events drew so many spectators, from all parts of southern New England, that they really put the Museum on the map as a place that welcomed and breathed the true essence of anthropology by sharing cultural diversity and exploring diverse cultural traditions. 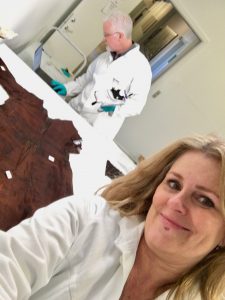 Analyzing the world’s most complete set of medieval clothing (from Herjolfsnes, Greenland) at the Danish National Museum, as part of my current NSF-funded project, with Kevin Smith, March 2017.

The second part of my experience at the Haffenreffer has been equally fulfilling, if a little less romantic. In 2009, I embarked on a series of research grants working on aspects of dress, textiles, and identity through archaeology. The Museum generously offered to provide me with an institutional affiliation that facilitated my grant writing in the absence of any academic positions in archaeology. I am now on my second three-year grant from the U.S. National Science Foundation, and $1.3 million dollars later, I can safely say that without the Haffenreffer I would not be at this stage in my career. I now work across the circumpolar region studying issues of gender, dress, and textiles, recurring themes in the Haffenreffer’s history.

Working in Greenland, Iceland, the Faroe Islands, Scotland, and Scandinavia, this affiliation has helped me to establish myself as a scholar. For the past 7 years I have developed and grown as a researcher with collaborations and networks around the world. I have been exploring unanticipated issues directly related to textile production in the Norse colonies of the North Atlantic—from climate change and resource management in Norse Greenland to economy and trade in Iceland, always with women’s issues at the forefront.  I am currently working on a book resulting from these seven years of research. While I miss the wonderful cultural performances that once characterized the Museum, especially at its beautiful Bristol base, the Haffenreffer now plays a much more important role in my life and it has become for me my Museum, my workplace, and the center of my world. 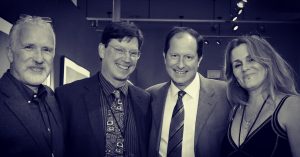