The blog is back! Sorry for the long hiatus – the Hall-Hoag grant project has been winding down very quickly the past two months, and there has been so much left to accomplish. Whenever any project is nearing its completion, it seems like something new pops up every day unexpectedly that needs attention or solving. One of these issues happened with the FileMaker Pro database. The database not only contains information on all of the Hall-Hoag organizations and people, but also the EAD (encoded archival description) and EAC-CPF (encoded archival context-corporate persons, bodies, and families) data needed for the upcoming website for the collection. To export the data should have been a simple task – literally as easy as clicking a button on the database. The previous project archivist had written and set-up the code needed to compute this data, so this should have been a relatively easy and low-stress task. We soon found that we could not export the EAD in any capacity (time was spent editing scripts, locations, ETC.), and spent much longer than anyone would have liked on this task. The good news was that the problem was a simple one – the file size appeared to be too large for FileMaker to compute, and a rewrite of the script to export the data in smaller parts should fix the issue.

Since we’re towards the end of the project, it seemed fitting to take the blog full circle. Below are two items from the collection directly related to Gordon Hall. The first is a newspaper article in “The Sunday Herald Traveler” from an April 9, 1972 issue, written by Gordon himself. The paper describes Gordon as a, “regular contributor on political extremism,” and the article tackles events concerning the Students for A Democratic Society at Harvard. 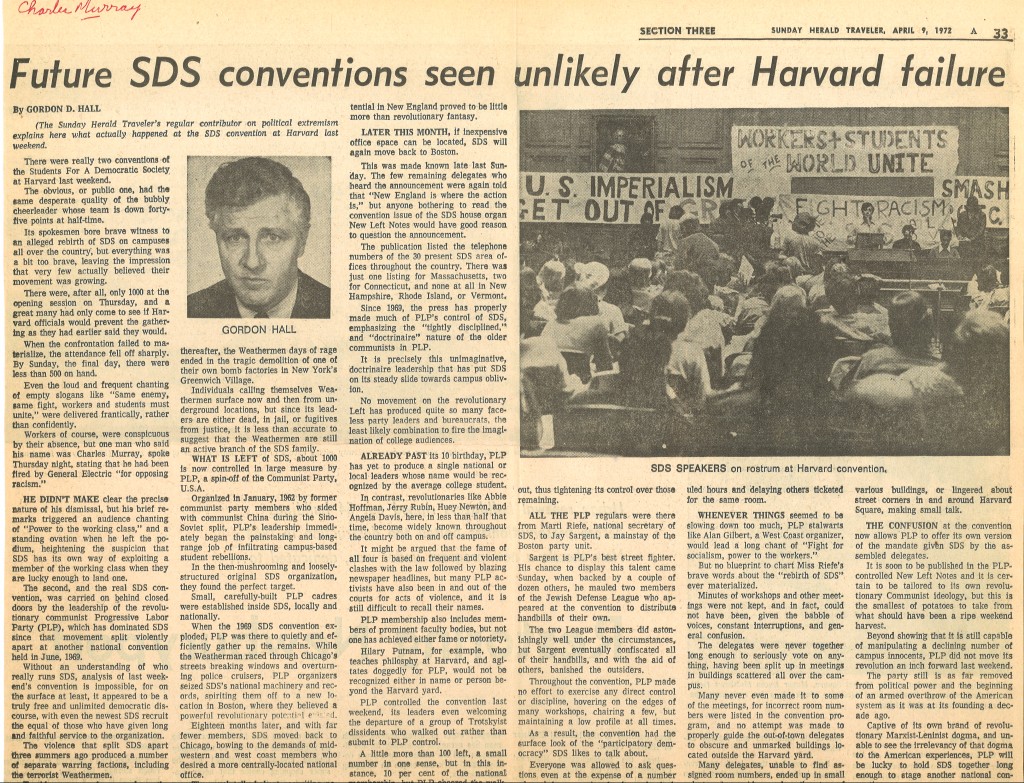 Article written by Gordon Hall for “The Sunday Herald Traveler”

The second item are snippets from an interview Gordon conducted with Richard Bayer on June 16th, 1968. Gordon spoke with Bayer about the National Renaissance Party (NRP), [1] a neo-fascist group with a doctrine that included white supremacy, anti-semitism, and opposition to democracy.  The National Renaissance Party, founded by James Madole, was known for its often violent protests and riots in New York City in the 1960’s and 1970s.  As an interesting side note, Madole enjoyed science fiction, in particular H.P. Lovecraft.  The H.P. Lovecraft Collection [2] is one of the most notable collections in the John Hay Library.

Below is a snippet of the typed version of the interview. The handwritten version can be found in the collection. 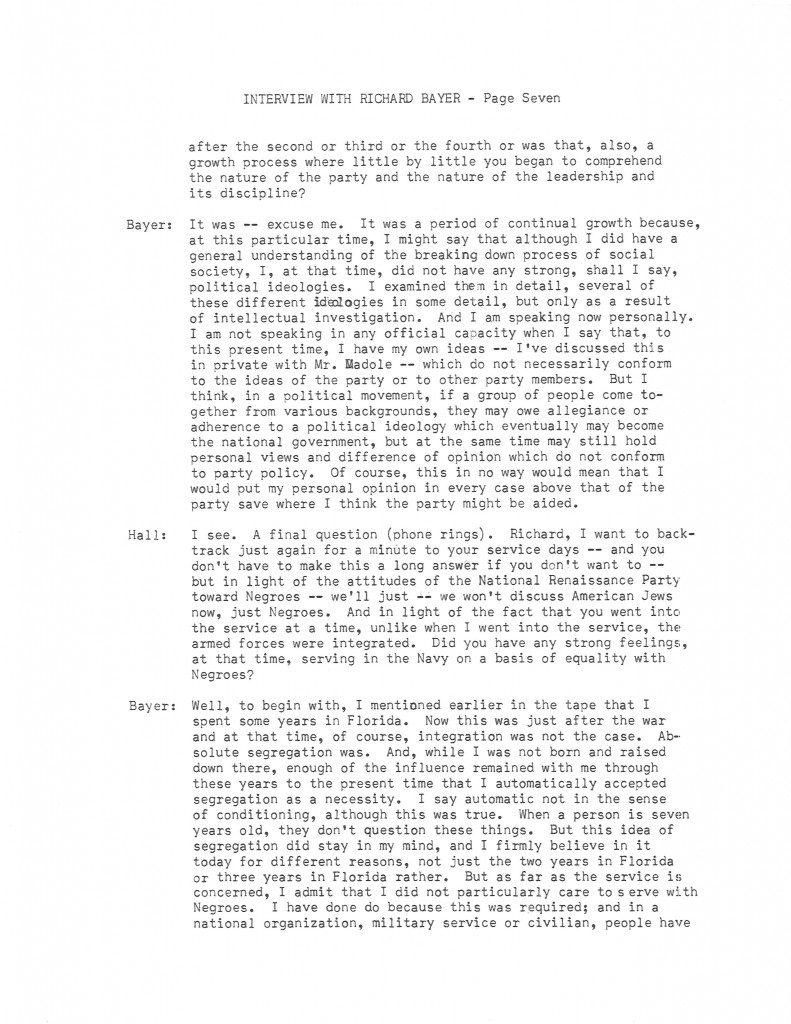 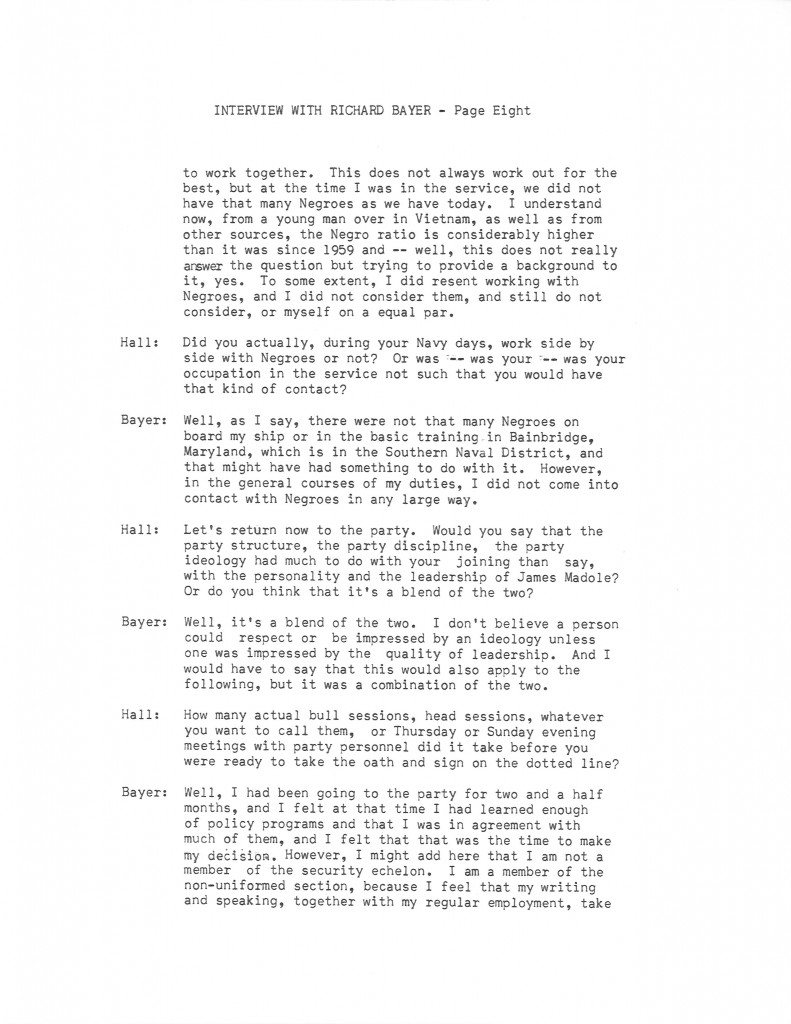 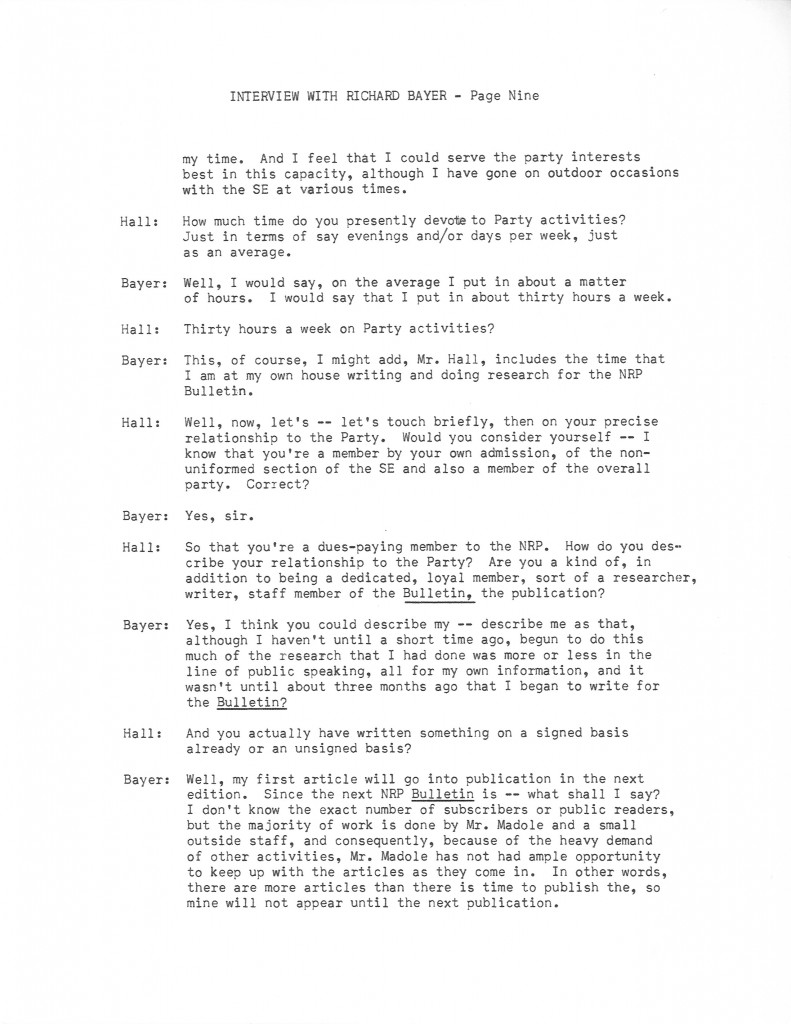 After James Madole’s death in 1971 the NRP faded from existence. However, a similar party was founded in 1990 by a man named Jared Taylor called, “The New Century Foundation.”[3] The group has a page on the Southern Poverty Law Center website [4], and it appears that they maintain both a magazine publication and website titled, American Renaissance.[5] It is important to note that Taylor refers to the group as “white-separatist,” and not “white-supremacist.”