For this assignment, I’ve chosen to explore the Hay Annmary copy of the first book ever printed in the Ethiopian liturgical language of Ge’ez—containing the Psalms and the Song of Songs.  Ge’ez’s unique script was the fourth alphabet to be adapted to the printing press, only preceded by Latin, Greek, and Hebrew.  This particular book was printed in 1513 in Rome, by the German printer Marcellus Silber.  We will explore the history of this particular book below.

In my exploration, I was driven by the verbs “magnify” and “expand.”  I wanted to find a way to lay bare the complex historical context and the more abstract religious and cultural context of this book—to find a way to negotiate the connections between the Ethiopian manuscript tradition, modern Ethiopian Christianity, European traditions of Sub-Saharan Africa, and print culture in a series of images, or a presentation.  I want to deconstruct the linearity of the book’s historical context, making clear its relevance as a liturgical text for a religious tradition that is very much still alive, while simultaneously understanding the historical context that undergirds the book. 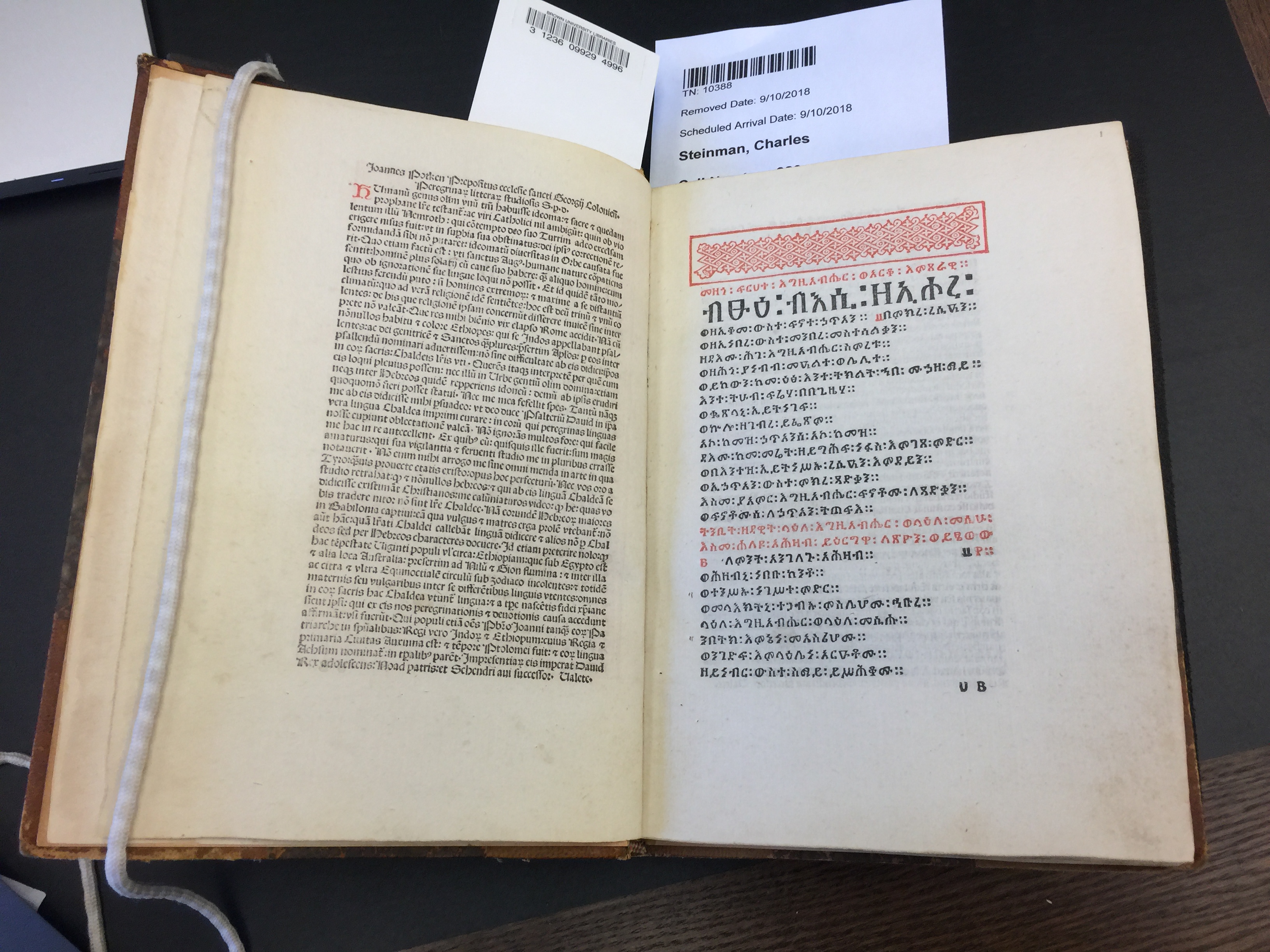 The opening pages of the Hay Annmary copy. On the left is an introduction in Latin, which contextualizes the existence of various Christian liturgical languages in terms of the story of Babel. On the right are the first Ge’ez characters ever printed, as well as a woodcut decoration. We’ll return to the woodcuts later on. 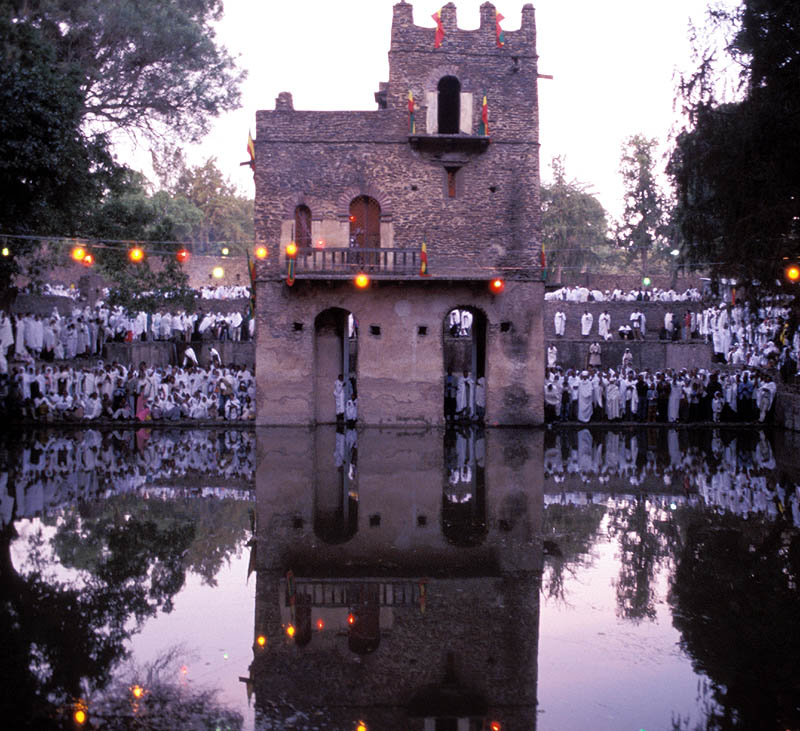 A celebration of Tikmat, the Ethiopian Orthodox version of the Epiphany, at the Fasilides Bath in Gondar, Ethiopia.

The past and present of Christianity in Ethiopia, while far from totally obscure, are not particularly well known.   I find this bizarre, having grown up in Washington, DC, a city with one of the largest populations of Ethiopians outside of Ethiopia.  Growing up, Ethiopian culture existed in a similar bilingual, syncretic space embodied by the psalter.  In my friend’s neighborhood, there is an Ethiopian Evangelical Church that is in a former synagogue, with Jewish iconography on the outside, and signs in English and Amharic. 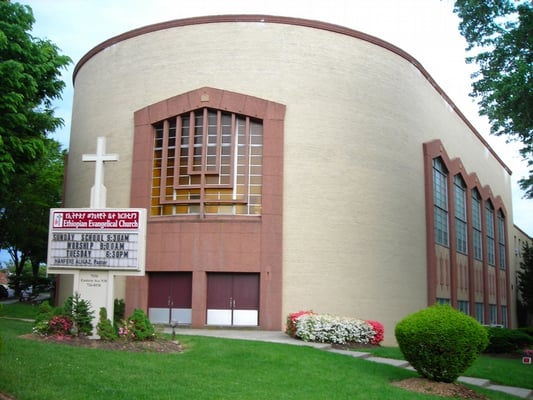 The International Ethiopian Evangelical church, on Eastern Avenue NW in the Shepherd Park neighborhood of Washington, DC. Notice the menorah-like window decorations at the front of the church. The building was a synagogue until the 1980s; Shepherd Park and the neighboring suburb of Silver Spring (located, quite literally, across the street) still has a large Jewish population. Notice the presence of English and Amharic alongside Jewish architectural traditions.

The psalter sits at an interesting moment of historical contingency, wherein Latin Christians had a uniquely close relationship with the Christians of Ethiopia.  In 1441, a group of Ethiopian monks arrived at the Council of Florence with a Franciscan friar, who accompanied them from the court of Zara Yaqob.  Their mission became a permanent fixture in the Italian peninsula; Pope Sixtus granted them their own church in Rome in 1479—the church of Santo Stefano degli Abbisini.  In the early sixteenth century, Joannes Potken, the provost of the college at Cologne, was invited to Rome to serve at the Papal court, and out of curiosity wandered into the Ethiopian church.  Fascinated, he developed a friendship with the Ethiopian Abbas Thomas Walda Samuel, who eventually taught Potken the Ge’ez language.  Despite his intimate familiarity with Ethiopian Christianity, Potken erroneously calls the language Chaldean, an earlier name for Aramaic. 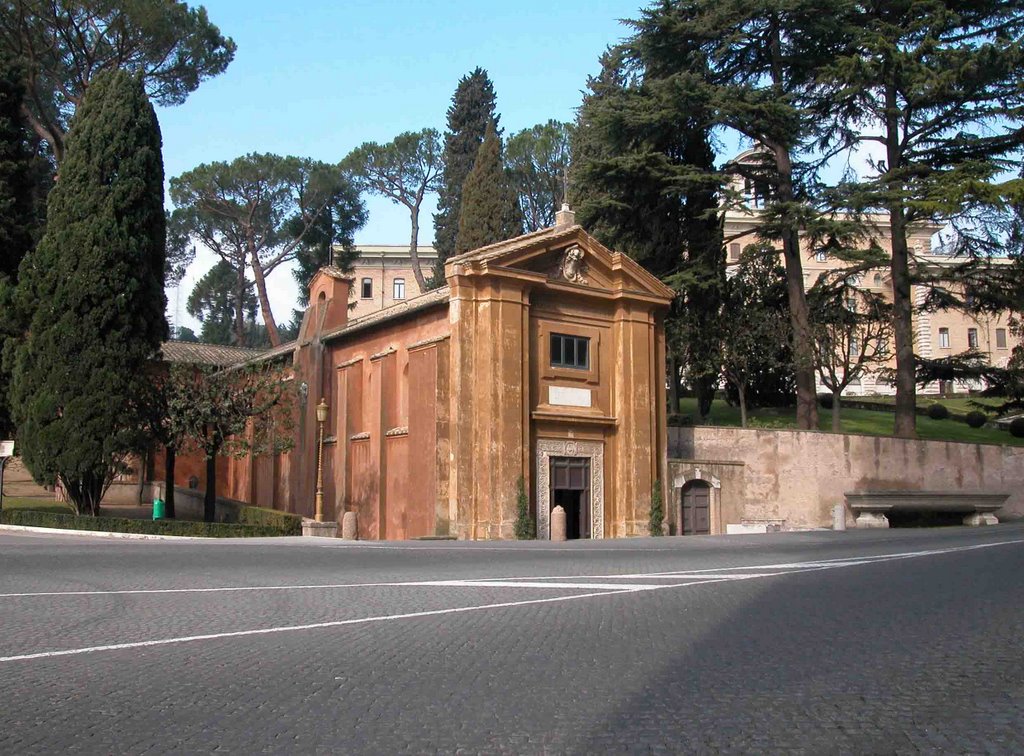 The church of Santo Stefano degli Abbisini (Saint Stephen of Abyssinia) in Rome. This particular building was built in the 18th century, although the congregation was founded in 1479. Potken entered this building sometime in the early 16th century, becoming fascinated with Ethiopian Christianity, and friendly with its Roman mission.

Beyond this particular historical moment, the book as an object sits at the intersection of various manuscript traditions, both from and about Ethiopia.  Æthiopia was a fairly generic toponym that referred to any and all of Sub-Saharan Africa (and occasionally India), derived from the Greek word for “Land of People with Burnt Skin.”  Ethiopians (read: people with black skin, usually understood to be from Sub-Saharan Africa) turned up periodically in European manuscript art throughout the later Middle Ages.  These traditions varied greatly, as we can see from two fifteenth century manuscripts, both from Germany.  On the left, Ethiopians are depicted as being part of the Antichrist’s army.  On the right, there is a depiction of the Ethiopian Eunuch from the Book of Acts, who converts to Christianity upon meeting Philip the Evangelist. 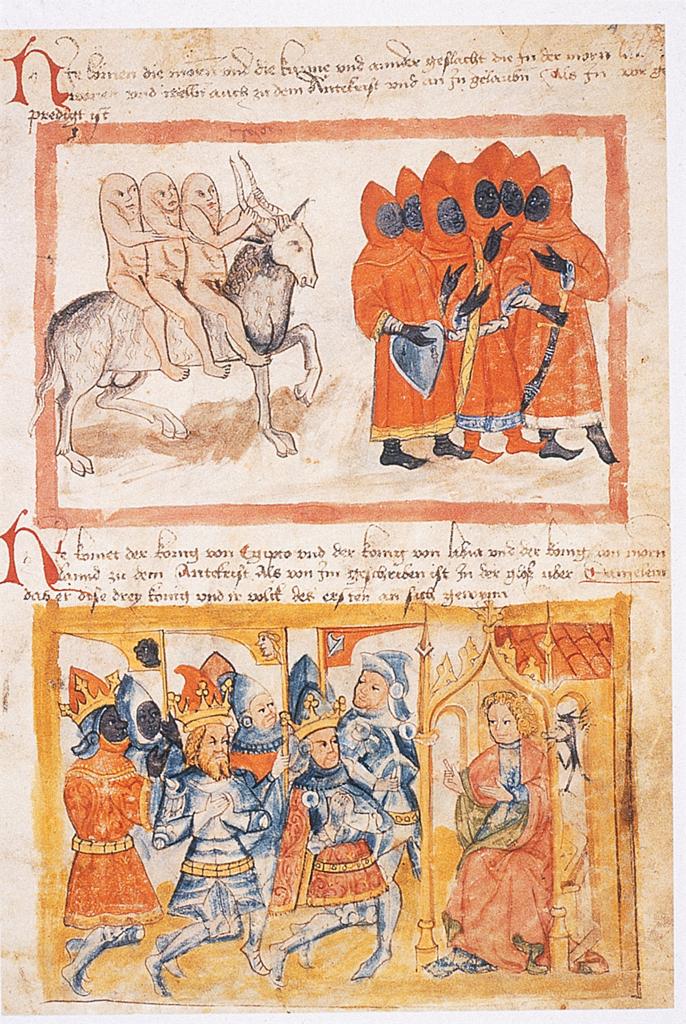 A mid-15th-century depiction of the coming of the Anti-Christ. Above, a group of blemmyai (one of Pliny’s “monstrous races,” men without necks who are often placed in Ethiopia) and Ethiopians congregate to find the Anti-Christ. Below, an Ethiopian (left), a Jew (center, identified by his pointy hat), and a Saracen(?) (left, a word for Muslims) worship the Anti-Christ. 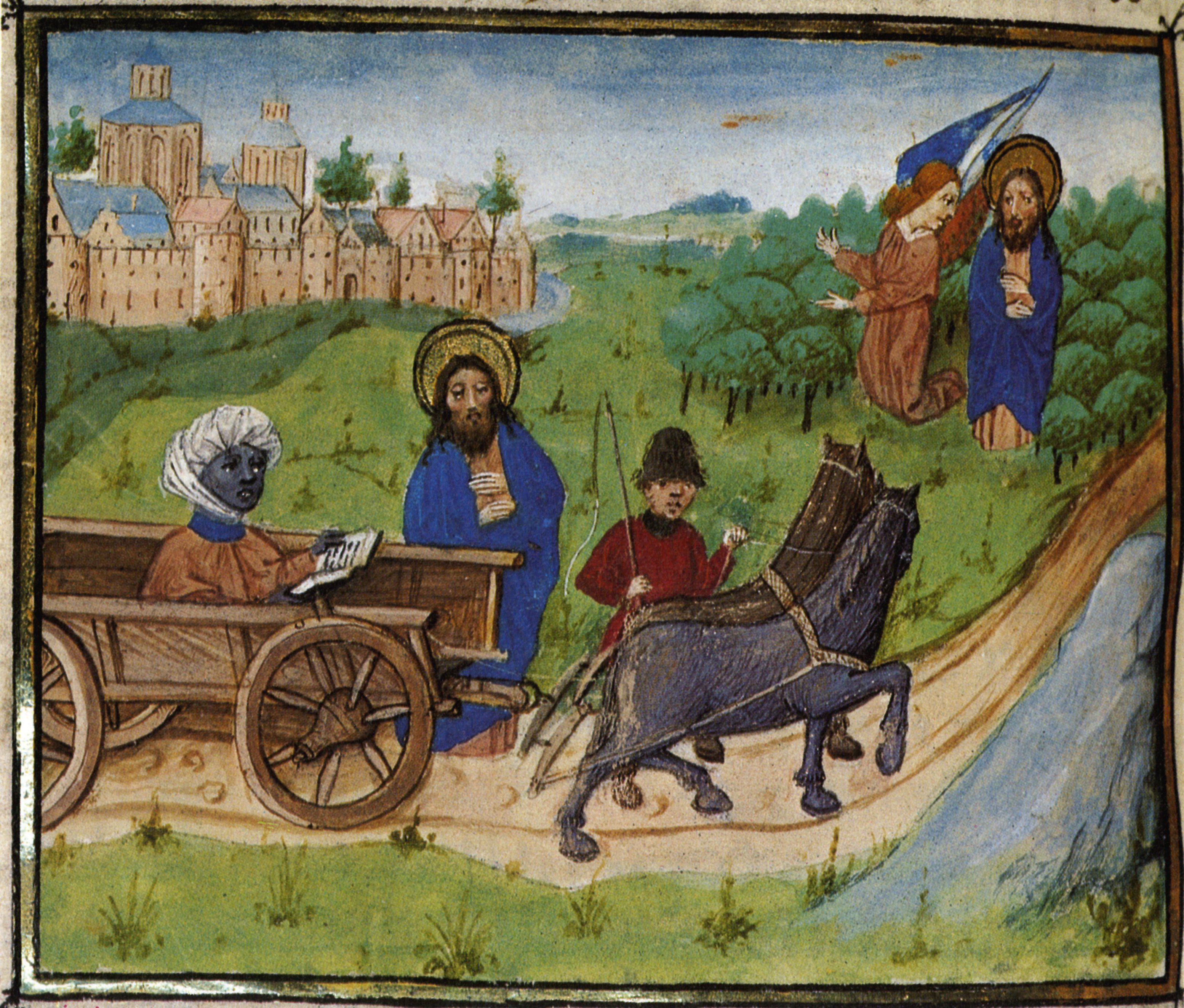 A 15th-century Dutch manuscript depicting the conversion of the Ethiopian eunuch from the biblical Book of Acts.

Through the 15th and 16th centuries, Ethiopia was explicitly associated with an idealized form of Christianity through the mythical figure of Prester John.  Prester John was said to be a Christian king, descended from one of the Magi, who ruled over a utopian and pious kingdom somewhere in the East.  He was initially placed in Central Asia (numerous Latin missions to the Mongols hoped to find Prester John), but was eventually associated with Ethiopia, especially once the Portuguese started to explore the southern and eastern African coast.  Below, you can see Prester John depicted in East Africa on a 16th-century Spanish portolan chart, as well as an Ortelius Atlas calling East Africa, loosely, “the land of Prester John.” 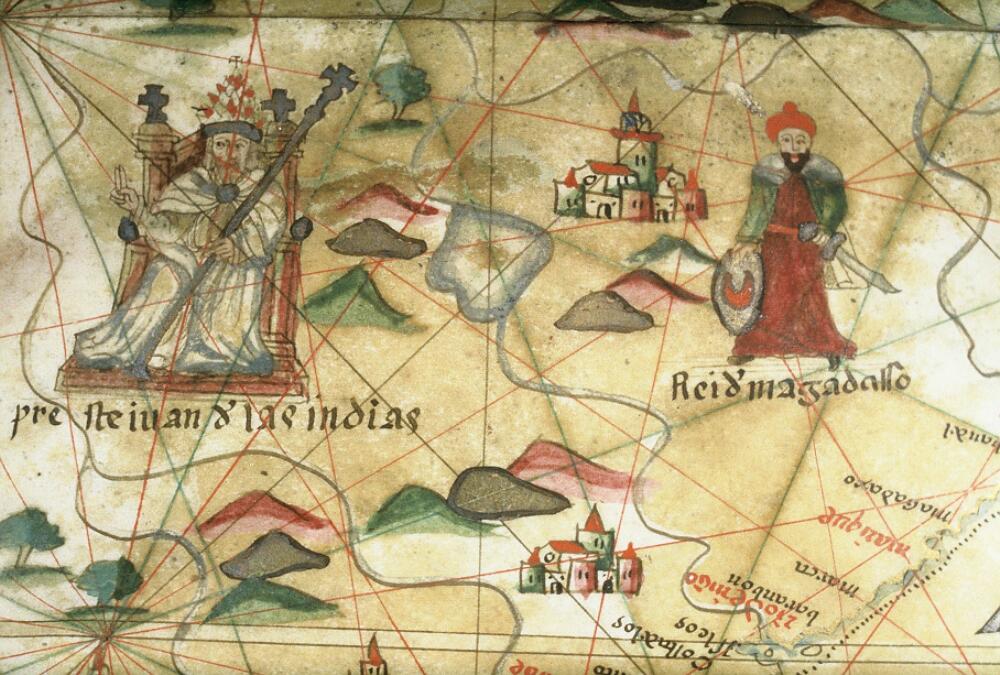 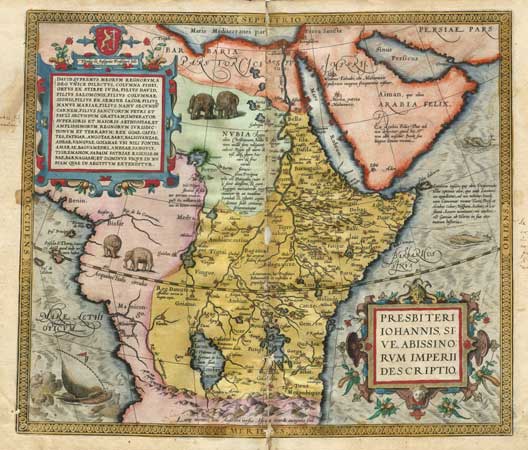 A map of Africa in the landmark Ortelius series of Atlases, explicitly naming East Africa “The Nation of Emperor Prester John of the Abyssinians.”

This brings us back to our Psalter, and in particular its woodcut illustrations.   The opening woodcut is a depiction of King David, author of the Psalms, which to me seems to recall the figure of Prester John as well.  I find this particularly likely given the exotic flora that surrounds King David, exoticizing him in a way that is atypical for European portraits of the Psalmist. 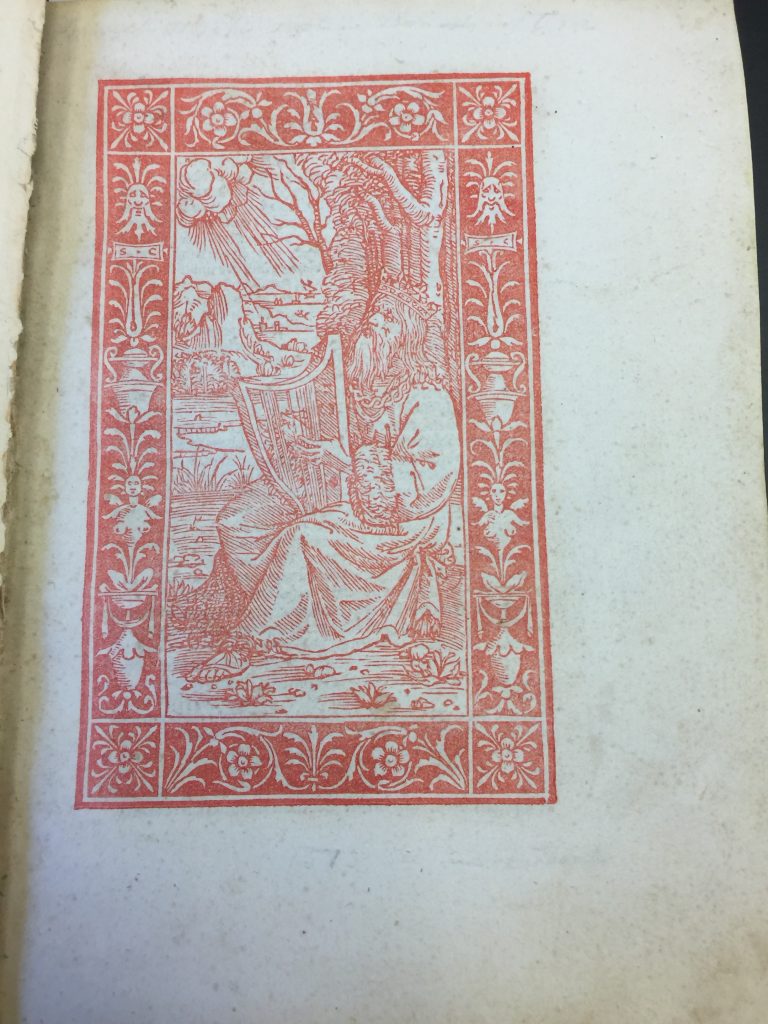 Potken, taking advantage of the exponential growth of print at the turn of the 16th century, decided to share Ethiopian Christianity with the Latin world by printing the Psalms and Song of Songs in Ge’ez.  He commissioned the type to be made by a German printer living in Rome by the name of Marcellus Silber.  The two worked extensively with Ethiopian manuscripts, one of which survives today in the Vatican library.  Below, I’ve included a sampling of Ethiopian manuscripts from the Middle Ages.  I’d like to draw your attention to the interlaced border decoration, which are ubiquitous in Ethiopian (and also Celtic, but that’s a story for another day) manuscript art from the period.  The third of the set is one of the manuscripts that Potken and Silber used to create their work. 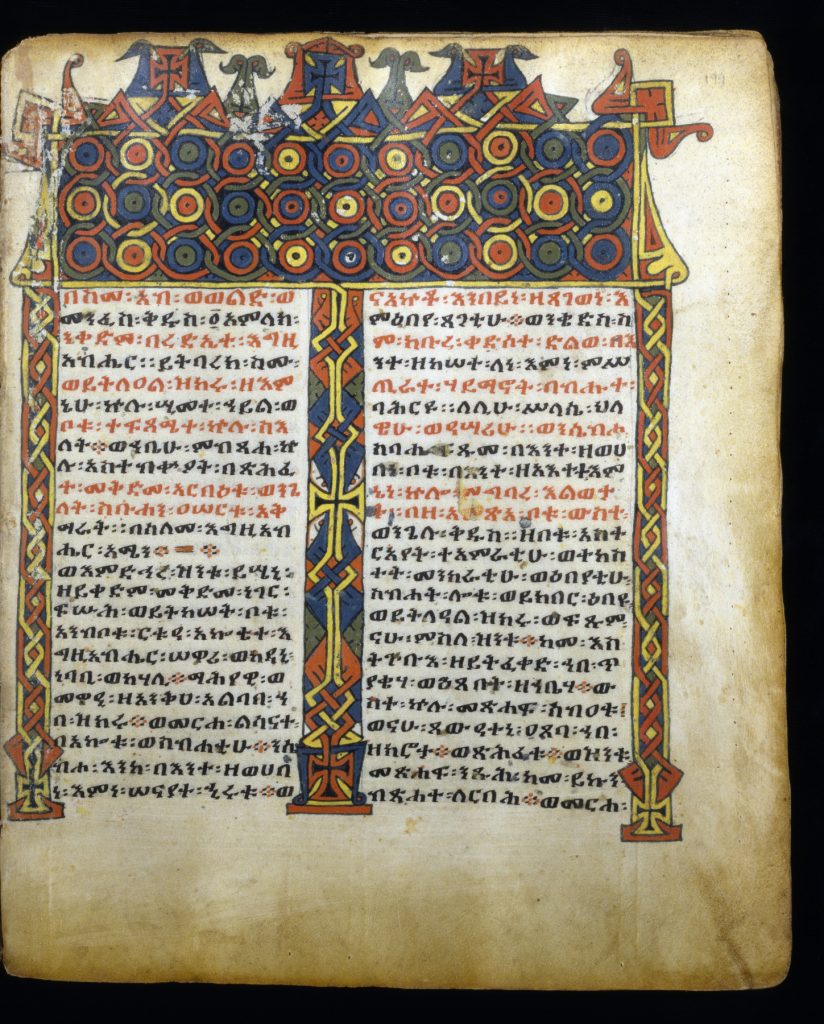 A leaf from the Gunda Gunde Gospels, early 16th century. 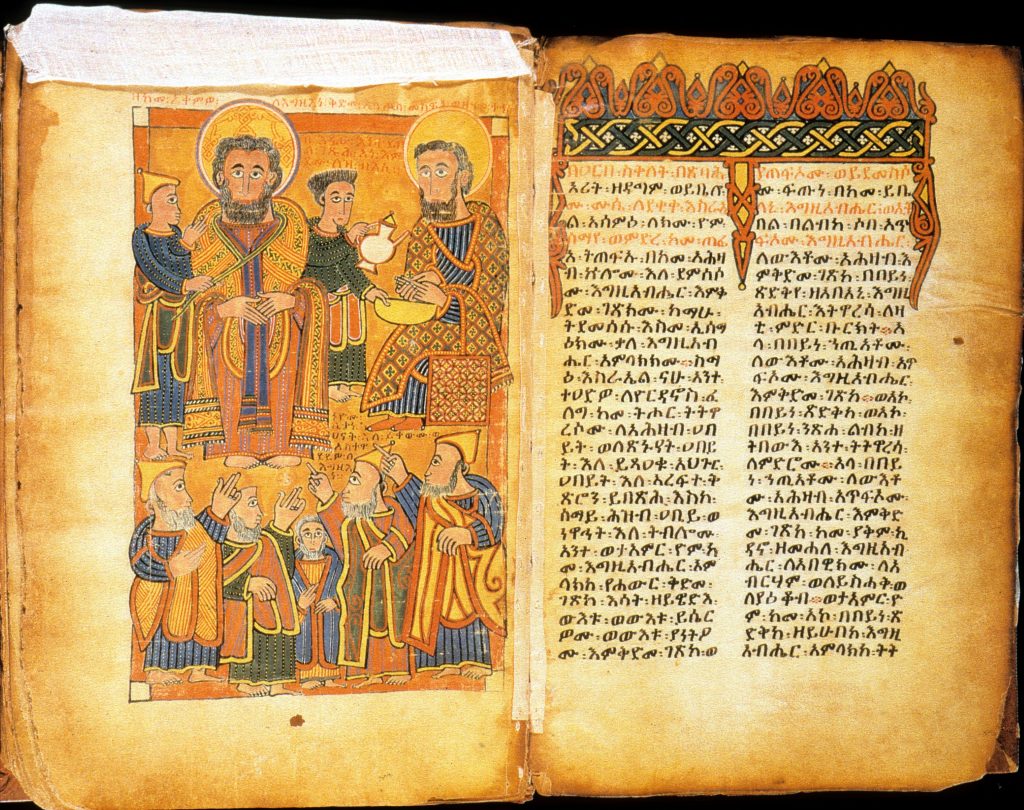 An image of Christ before Pilate, from a late-15th-century manuscript. 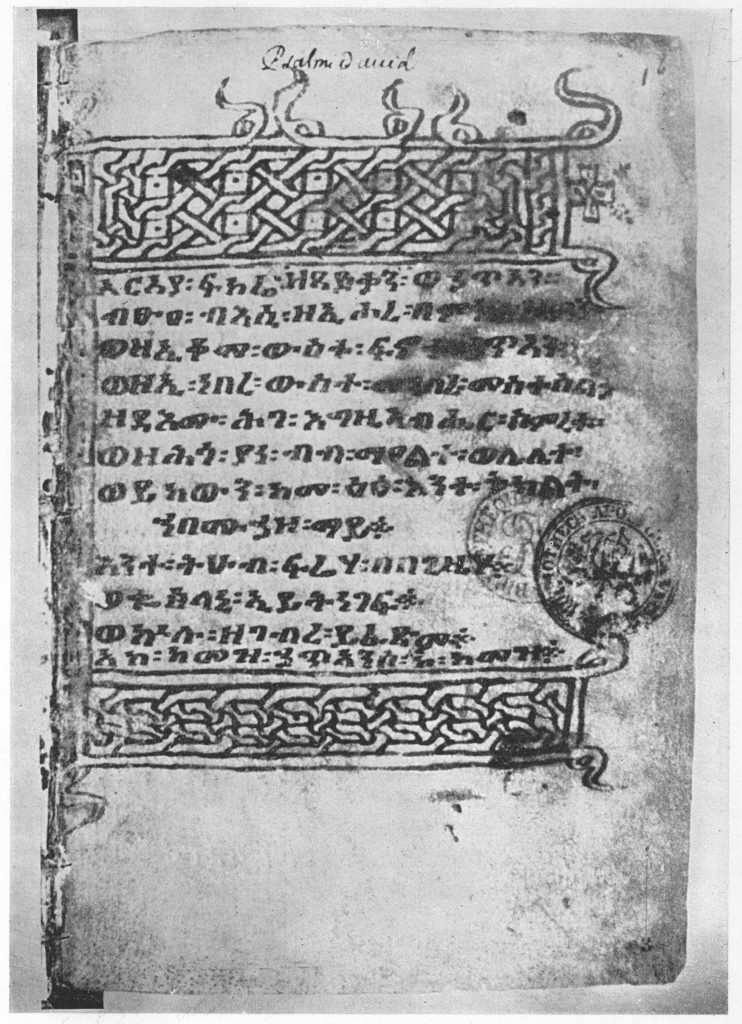 The Vatican manuscript from Ethiopia used by Silber and Potken.

Now, let’s return to the opening Ge’ez page of the psalter, paying particular attention to the woodcut at the header.  It’s interweaving designs, in particular the points and foliate designs on either end, and the circles sprinkled throughout, are very similar to the manuscript designs above.  The work that went into creating the Ge’ez type itself is clear.  But what I find fascinating is that, apparently, Potken and Silber directly engaged with the Ethiopian tradition of manuscript art in creating this particular woodcut.  There has been a lot of scholarship arguing for continuities between European manuscript traditions and early print, particularly in border art.  Here, we see that these continuities were extended to the Ethiopian manuscript tradition as well; as Ge’ez entered the world of print, so did the designs that accompanied it in manuscript. 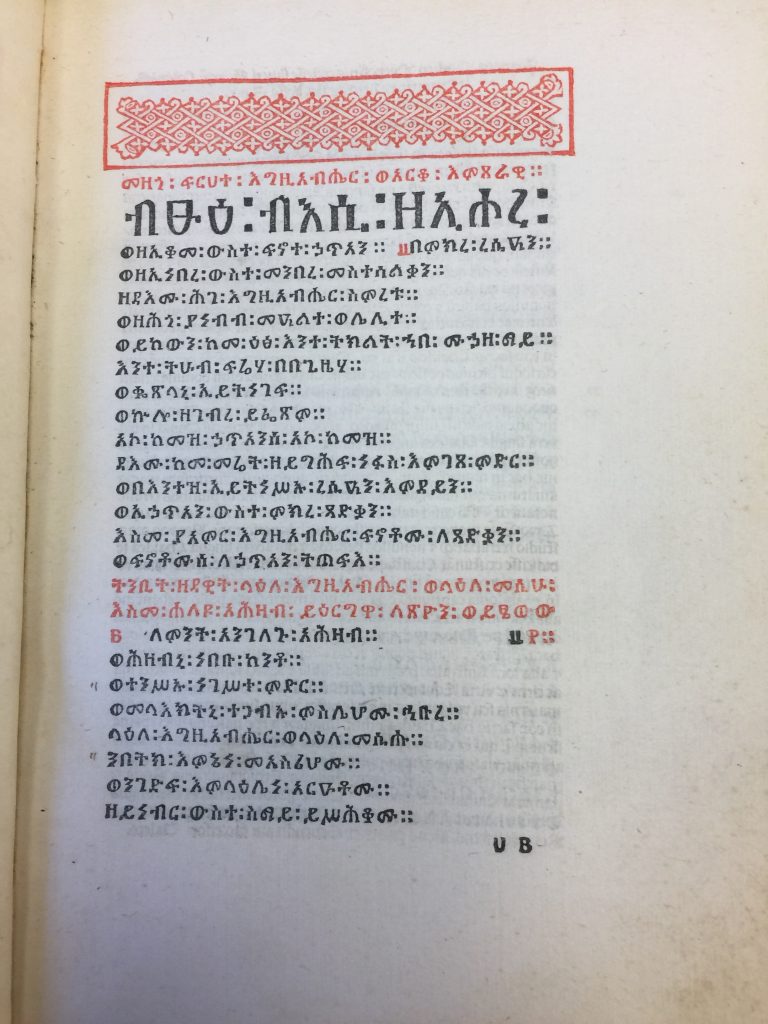 If I pursue this project further, I think I’d have to do more research on the Ethiopian mission in Rome, and the physical production of the Ge’ez typeface.  I’m very curious about the process of trial and error in creating a psalter like this, and would have to think differently about the material nature of the psalter in order to really shed light on this.  I’m also very curious about how exactly these books were used.  This particular copy has lots of marginal notes that indicate frequent use (even including notes about how loud to sing certain lines!), but I can’t find much about who the annotator is.  Was this purely intellectual? Was it a proselytizing tool? A language learning exercise? These are questions that may be unanswerable, but that I would very much like to pursue. 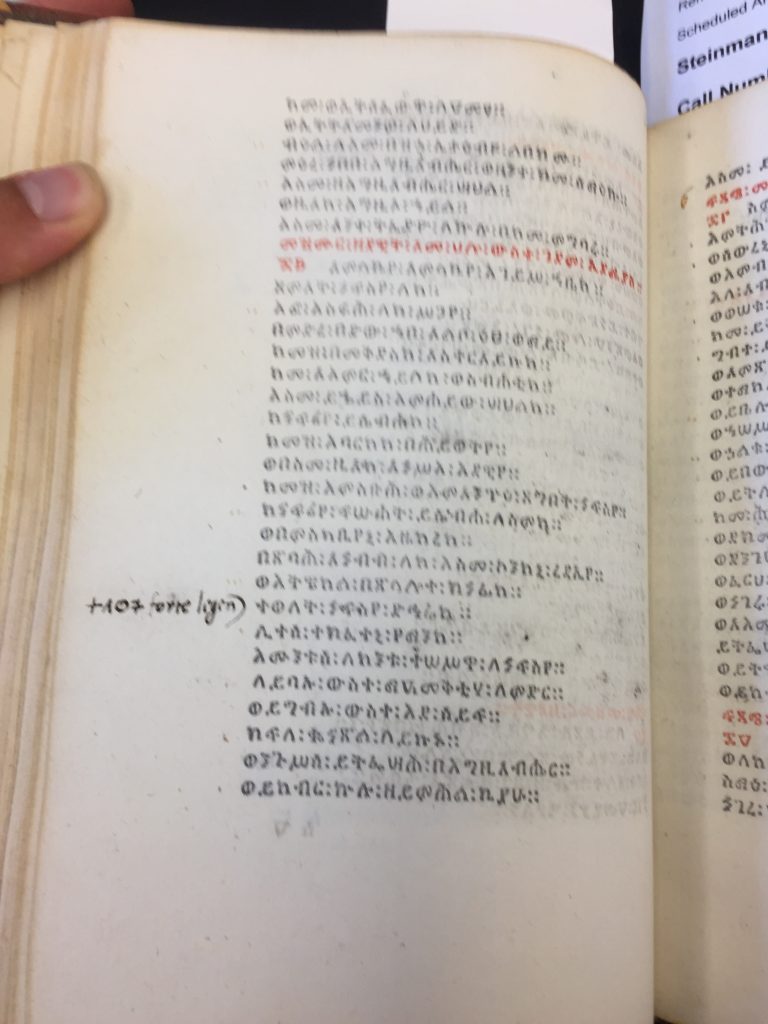 A handwritten marginal note indicating that a particular Ge’ez word is to be “forte legem” (read strongly/loudly). 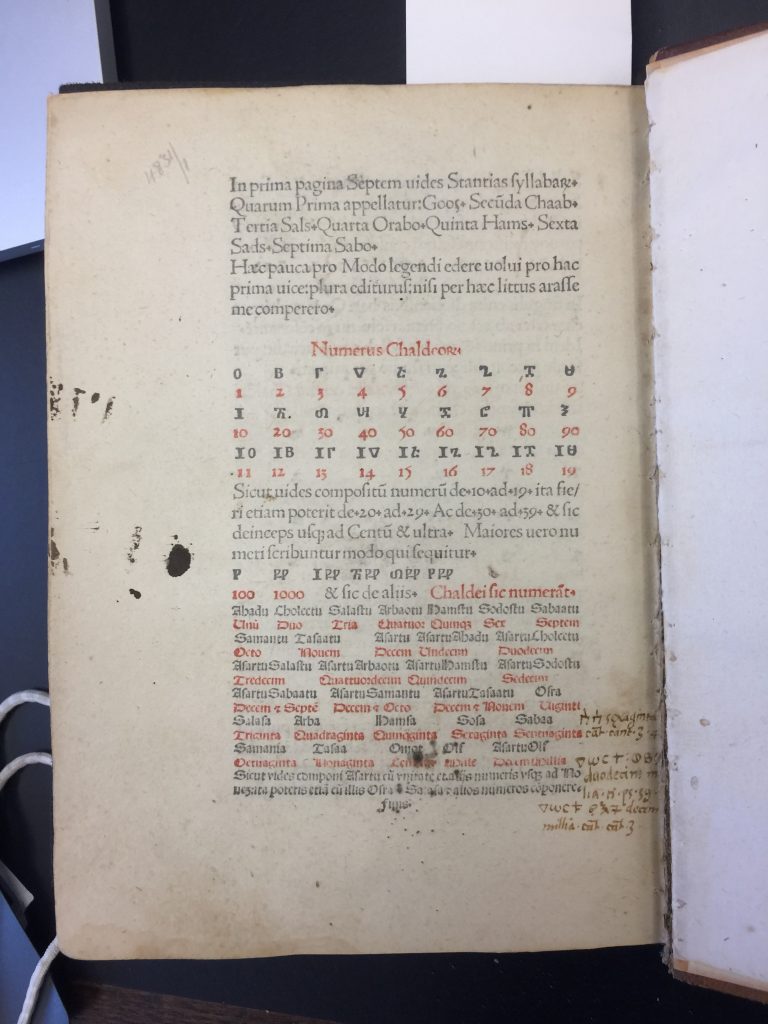 The end of the Ge’ez syllabary, which is heavily annotated, as well as printed in a different Latin type than the rest of the book.

2 thoughts on “A Psalter Printed in Ge’ez (Charlie Steinman)”