I selected a volume of the Encyclopédie ou Dictionnaire Raisonné des Sciences, des Arts et des Métiers, par une société de gens de lettres by Diderot and d’Alembert – specifically, the eleventh, which I thought to concern sewing. This volume claims to have been printed in 1765 in Neufchastel, by Samuel Faulche & Co. – I believe that means it’s a first edition. There’s a purple stamp denoting that it was once owned by the Bibliotheque Paul Kinsbourg in Paris; seeing as it was published there, that’s no surprise. 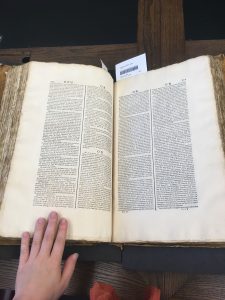 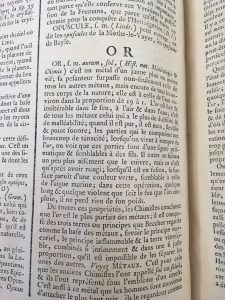 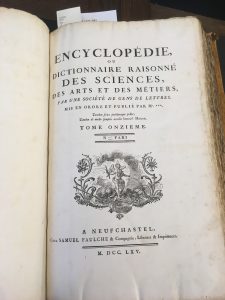 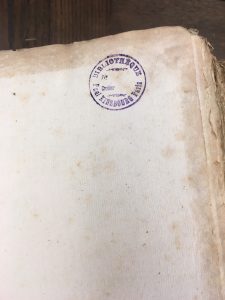 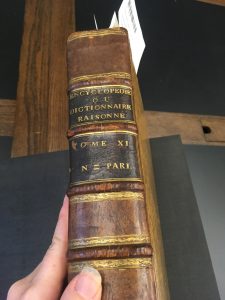 I did preliminary research; the book is in French and I knew I needed an English translation if I wanted to understand anything. I have some prior knowledge of Diderot’s work, and was interested in trying to find and possibly replicate some of his instructions on lace and sewing. After some effort, I finally located an English book that contained his illustrations – but no verbatim translation. I also located a facsimile of volume 11 (on habillement/clothing), and thus ordered the original volume 11 from the Hay. To my grudging surprise, it wasn’t the same book; I think the numbering has changed over the years. Volume 11 of the original is structured like a dictionary, instead of a guide. So I can’t respond in the way that I wanted to there, but I definitely have some thoughts about this book.

1) It’s enormous. Fully spread out, it takes up half of the large Special Collections tables, and it’s quite tall and heavy even when closed. Considering that there are 17 volumes of the Encyclopedia: this is an investment. It requires money, storage space, reading space, contacts (the latter half of the set wasn’t listed as being published in Paris, as Diderot was afraid of political restriction, so it had to be procured somewhat secretively), and serious literacy and time if one wants to actually read anything in it.

2) This may be a political work, but it is genuine. Diderot truly must have wanted people to be able to learn from it. The scale of the writing, the printing, and even the hampered distribution demonstrate serious motivation. This is not the encyclopedia of a professor emeritus, interested in classification and renown – this is a work for the good of the world. However, it is still markedly political; it is a work of science in a world of religion, promoting concepts like equalization of wealth, and many of Diderot’s contemporaries contributed their knowledge and opinions to its articles.

3) A book like this is completely wasted on an individual. Not to say that people shouldn’t own encyclopedias, but rather that in the context of the period, the Encyclopédie would have seen the most use at a public institution only. Did that kind of facility exist? And if not, was this really a worthwhile prospect?

Alright. Switching back to the facsimile of a different volume….

I didn’t have much time after the volume mix-up affair, so I chose to replicate one of his demonstrated stitches, translating it to the modern day: instead of a plate illustration of the end result, I’m making a photo tutorial! 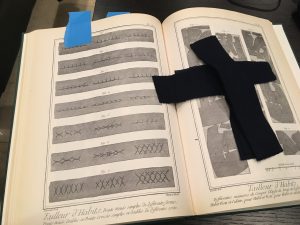 The explanation for this planche (plate) on the preceding page is quite short, so I was able to type it up and translate it, only to realize that it’s almost the same as the caption (very rare, in this book; usually there’s a detailed explanation).
“Fig. 1. 2. & 3. Simple knotted stitches of nine different shapes.
4. Double knotted stitches of three different kinds.
5. 6. & 7. Single & double cross points of nine different kinds.”

I chose the first arrangement in figure 5, which is easy enough for an experienced stitcher to figure out by sight. (Is that what this was intended for? Probably not. Hmm.) I admit, though, that I have no idea what he means by ‘single’ vs ‘double’ cross points. This is probably a single?

My tutorial, in the style of modern sewing aids: 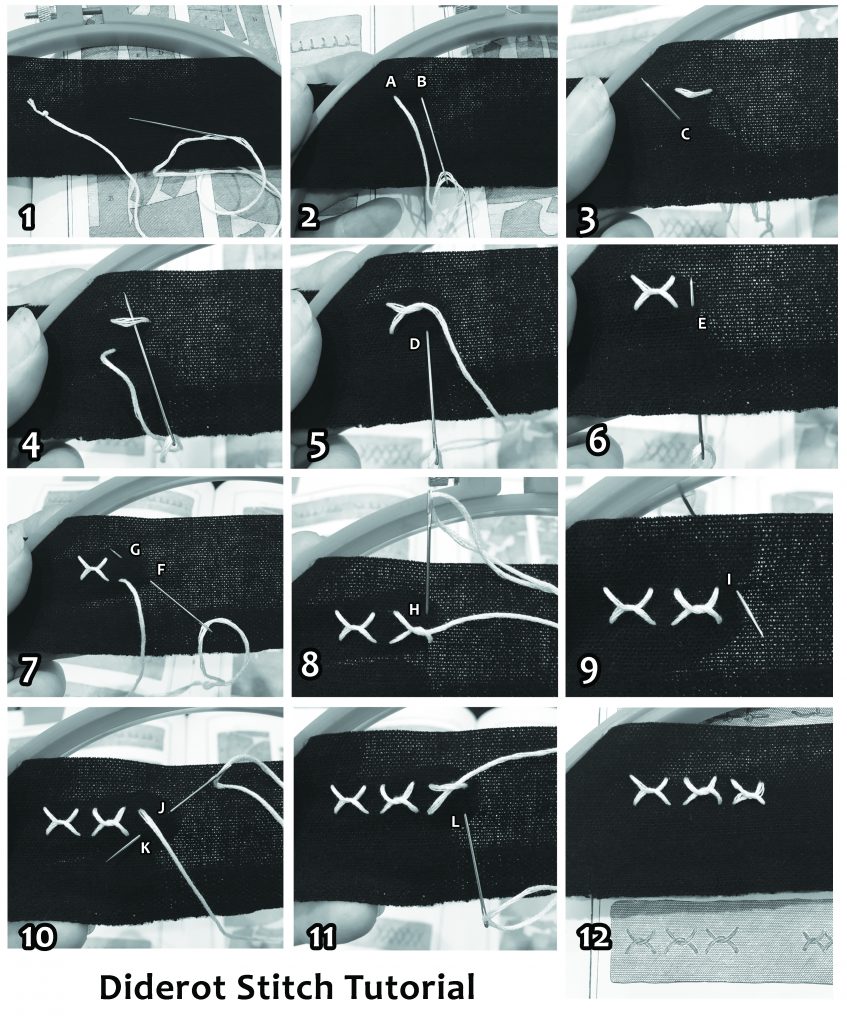 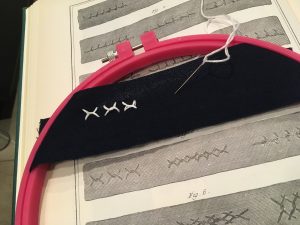 The final product, directly above its 18th century predecessor!

When I first thought about Diderot, I wondered about sewing a complete garment, or maybe a miniature. It’s quite rare to see historically published books containing patterns, since tailors and mantua-makers guarded their trade quite scrupulously, so Diderot is one of the few. But I think that if I were to travel down this road for a final project, I might want to go back a bit further and complete a garment (and research about) Juan de Alcega, who published a pattern book in 1589 (to much controversy, according to Wikipedia). He used an entirely different system of measurement and blocking, and Fleet Library happens to have a rare copy of the English translation. I’d be very interested in attempting to replicate his techniques, and seeing how the differences change my own understanding of the clothing. (And perhaps understanding how the publishing of a pattern book changed the concept of sewing and clothing for people in his own era!)