The Queen’s Closet Opened is a compendium of “secrets in physick [medicine], chirurgery [surgery], preserving, and candying, etc.” that was supposedly presented to Queen Henrietta Maria (wife of Charles I) and compiled into a book in 1655 (our version is from 1671).  It is not, as many of the people I told of my assignment this weekend, related to the queen coming out.  This phrase ‘out of the closet,’ at least according to Gay New York (Chauncey 1995), has its origins only in the 1960s, so unfortunately, this is not a secret Lesbian anthem from the 1650s.

With that out of the way, The Queen’s Closet Opened is a small book, published by N. Brooke for the specific sale of an individual named Charles Harper whose store(/residence?) was on Fleet Street in London (the description of his location is detailed; no cross-streets, but near a church at the “flower-de-luce”—fleur de lis—presumably a symbol on his store/residence?).  It is especially cool because it has both a table of contents (organized not how we would have with chapters, but by the names of the individuals who donated the recipes and the pages they appear on) and an index of recipes (pictured below).  The book has many recipes on a variety of important things such as several plague cures, breaking up kidney stones, curing ‘melancholy,’ a cure for the “Purples,” a way to “preserve a woman with child from miscarriage and abortion,” and even a recipe for Almond Milk. 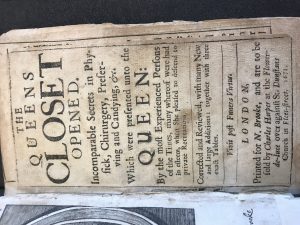 The purpose of publication is a little unclear, but the British Library suggests that in the aftermath of the dissolution of the monarchy by Oliver Cromwell, many people were out of a job, and writing/contributing to a book may have been a way to make money, as they were “able to release the secrets hidden in the cabinets of the aristocracy.”  Indeed, the note to the readers (below) seems to suggest that there was interest in what was “above common Repute.” 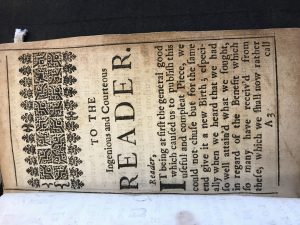 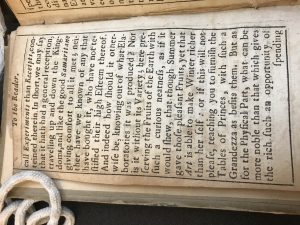 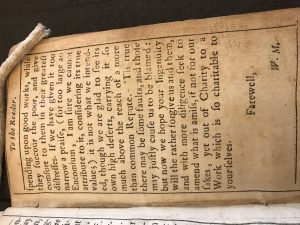 Figures 5-7: Note to the readers

I thought that I could take this opportunity, given a certain lack in artistic ability, to use the verb ‘replicate’ to approach this work.  Unlike Natural Magick, which had confusing and not always straightforward directions, it seems like there was an attempt to make The Queen’s Closet Opened a work whose recipes could actually be used and replicated by individuals with access to the various ingredients contained in the book (of course, you also had to be able to afford the book itself).  This, I would find, was no simple matter.

I decided it might be fun to make Almond Milk (recipe below), which seemed to make use of a number of ingredients that I was unfamiliar with.  There were three recipes, two of which were easily eliminated because they took several weeks to make.  The last presented an interesting challenge because of particular ingredients, some of which were noted by a name that was either very specific to a certain area in Britain (and presumably unavailable in the US), or very broad (Maidenhair could mean either two types of ferns, two types of berry-bearing shrubs, or a huge number of flowering plants or moss).  Another difficulty was acquiring barley, which I thought would be easy as this weekend I was travelling to Iowa to attend my partner’s cousin’s wedding.  As it turns out, barley is not a crop widely grown in Iowa (mostly soybeans and corn), and none of the grocery stores I went to had any or knew where I could find some.  So much for almond milk. 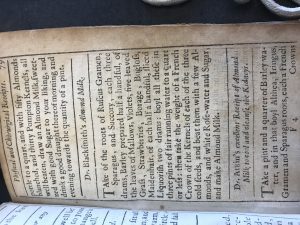 Instead, I decided on a much simpler recipe, the “syrup of Pearmains, good against melancholy.”  Pearmains, a type of apple was not available at the famous Iowa City grocery store Hy Vee, but I was able to substitute for another type of apple.  “Citrons” was a bit harder (did they mean oranges? lemons? What exactly was available to 17th century English upper-class individuals?).  I finally decided on lemons after some cursory research into the use of the word in the 17th century.  The roots and leaves of Borrage were even more difficult; no one I knew in Iowa City (i.e. my partner’s family) had a crop of Borrage and I apparently was supposed to attend the wedding, so my time to search for it was limited.  Eventually I ended up in a local supplement store that had, surprisingly, borrage powder, which the lady at the counter assured me had both the roots and leaves of the plant (making me even less certain about the validity of supplement stores).  Unfortunately, borrage root (or whatever this actually was) is incredibly bitter, and when combined with the other three ingredients (sugar, apples, and lemon), it had a very bitter taste, which was not widely appreciated among my partner’s family (making a good impression!).  That and the realization that the syrup (really more of a bitter applesauce) was a liquid/gel and did not pass the TSA’s regulation for the transport of 17th century medicine made me not want to bring it back to Rhode Island (I decided the taste would not be improved by me putting it into an emptied 3 oz. shampoo container).

This study could certainly be translated into a semester-long project (maybe it would take that long to grow some real Borrage—a surprisingly ubiquitous ingredient in the Queen’s Closet Opened) of replication, though I’m not sure what ultimate good this would achieve.  Perhaps more interestingly for me, it would be cool to look into who had access to what ingredients.  Are there records of what plants/ingredients were sold at shops in London in the 17th century?  Could I identify which recipes were full of luxury ingredients and which could be found relatively easily?  Are there records of people actually utilizing the recipes?  Could I find out about who owned our copy and who he was and how much access he had?  I think determining this could lead me to a better sense of whether these recipes were actually as accessible as I thought in the beginning of this post.