Wrestling with the unmanageable size and considerable weight of De humani corporis fabrica and dealing with the apprehension of handling an object I could never afford to replace proves worth the effort/risk once I open the book and discover the scene unfolding in its frontispiece. Dissection is no longer the dismissed and subordinate labor of barber surgeons – it is the center of a spectacle orchestrated by Vesalius: his right hand maneuvering the uterus of a female cadaver, his left-hand index finger pointing like a manuscript manicule. Spectatorship is also depicted as a full physical endeavor, with the attendants to Vesalius’s demonstration crowded around the corpse, twisting their own bodies to catch a sight of the action (not unlike a Hot Night at the Glass Hot Shop!). 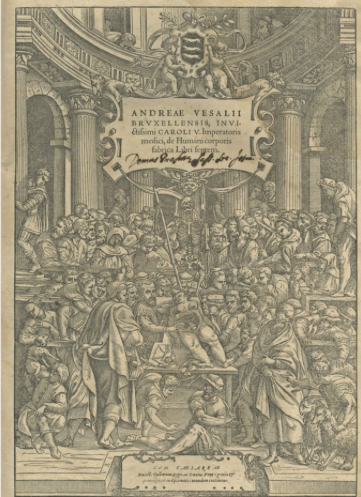 I notice that while they are contemplating Vesalius’ masterful manipulation many spectators are also using their own hands, busy with touching each other, pointing at something, using them as a means of expression, restraining animals or handling carefully depicted instruments. I wonder about the relationship between contemplation and ‘deviated’ labor or manipulation. What happens when the observation of and the reflection upon some sort of craft is accompanied by the undertaking of an unrelated manual labor? Where do both intersect? Does this simultaneity of contemplation and labor matter? 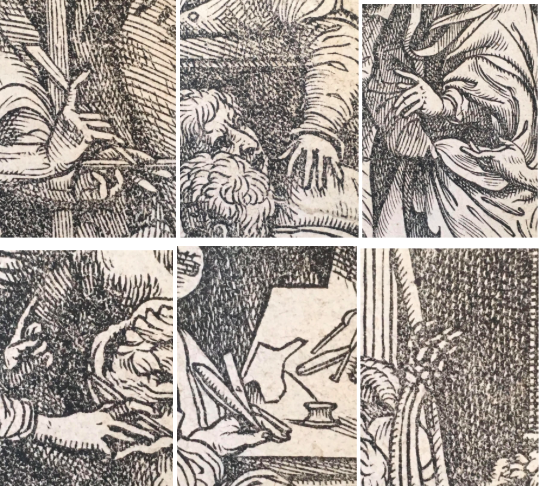 At this point I think that to exaggerate the Vesalius is to read the corporis fabrica as a book about hands, forgetting about the rest of the anatomy. In fact, it doesn’t seem to be such a big exaggeration when I get to Vesalius’ portrait, right after the frontispiece. On a table crowded with writing and dissecting utensils, Vesalius holds the arm of a corpse as the entrypoint to his anatomical study, with his left hand firmly grasping the elbow and his right hand holding the falling veins (I think), which uncannily blurs the limit between the instrumental hand and the studied one. I wonder if this emphasis on the hand is exclusively a Vesalius thing or a common obsession in anatomical books, so I try google and soon find the portrait of the anatomist Giulio Casserio (1561-1616), also stressing his own dexterous manipulation of bodily matter by posing rummaging under the skin of a disembodied hand. 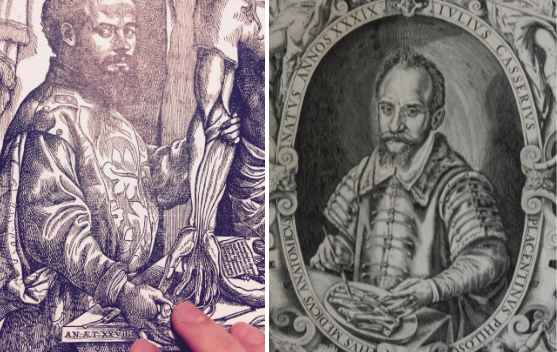 I do some more research and find that, apparently, the flexor-muscle dissection developed into a whole motif, used emblematically in early seventeenth-century anatomy portraits, making the hand agent, instrument and patient of the demonstratio. In this way, the hand became a symbolic unit signifying both the perfection of God’s creation and agency, and the almost divine intervention of the dissector’s hand (Katherine Rowe, ‘Divine Complicity: “God’s Handy Worke” and the Anatomist’s Touch’). Vesalius’ and Casserio’s almost defiant gaze seem to turn the celebration of their craft into an invitation for us readers to involve our own hands in the handling of matter. I use mine to carefully turn the pages and compulsively scan all the hands in the book. 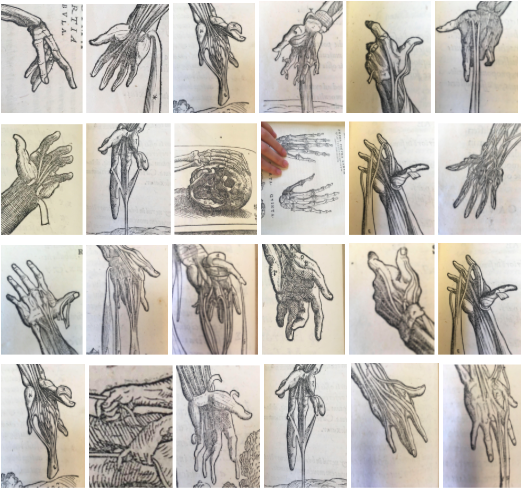 Taken out of context, these hands are not so much passive objects of study as they are extremely busy instruments. Even when their skin, veins, and muscle are collapsing they seem to be actively engaging with the mess – exposing, grabbing, stretching or holding it. Sometimes they point at the blank space in the page. I put them all together and their expressiveness immediately makes me think of some sort of sign language. I find online some early modern texts about systems of representing numbers and words with hand gestures, and their illustrations look strangely similar to my own hand accumulation. 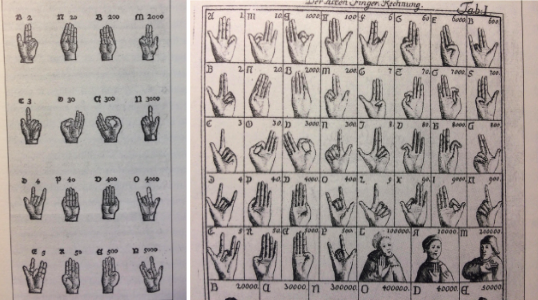 What message, if any, are the hands of the Fabrica trying to convey? I take them as emissaries of Vesalius’ message, little reminders populating the text with the same defiant and enticing attitude. Are they asking me to engage with this book in the same way they engage with all that crumbling bodily matter? My hands do feel restless as they touch the surface of these black and white pages – they would like to slowly color all these illustrations, or annotate its huge, inviting margins right next to its own printed guiding notes. 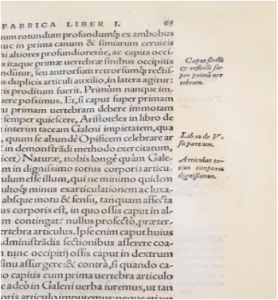 And yet this book is also intimidating, its size and luxuriousness able to freeze any hand. I can’t find any handwritten note in this book, so I wonder if past readers did also feel divided between the impulse to manipulate matter and a wondrous restraint. I type some keywords on Google Books and soon find a whole book devoted to the De corporis contemporary readership (The Fabrica of Andreas Vesalius: A Worldwide Descriptive Census, Ownership and Annotations of the 1543 and 1555 editions). It was a luxurious item from the beginning, acquired by the highest echelons of society and wealthy private physicians who did use the book for studying and made some annotations, but mainly focused on the more theoretical aspects of Vesalius’ book while apparently ignoring its dissection description and instructions. Surgeons, less highly ranked on the social ladder, generally acquired the Epitome, a book produced by the same publisher with summary information and only some illustrations, for a lower price. However, if these private physicians were merely interested in musing about the coincidences and disparities between Vesalius and Galen and were not at all concerned with the instructions on how to guide dissection tools along an open corpse, why did this information stay in every edition? I read that some parts of the book were shortened while others were expanded, depending on the interest of their readers. The sections about dissection and its instruments never disappeared from the Fabrica. 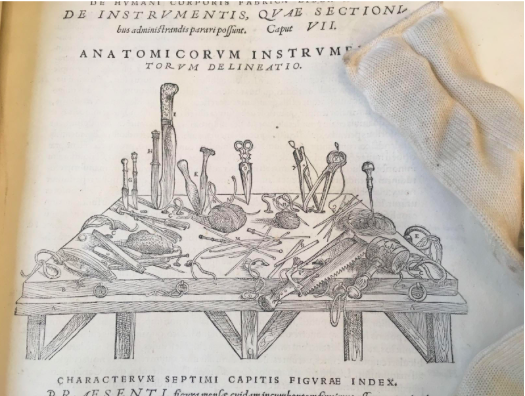 I look at this illustration exhibiting the abundance of dissection instruments and my hand instinctively moves as if ready to grab one of them, but all I have with me is my reading weight. How did physicians, who were not dissectors, react to these instruments and the instructions on how to use them? Did they read these sections with embarrassment, avoiding to annotate their pages in the way they proudly and heavily did annotate the theoretical pages? Did they read them just out of curiosity or did these pages have some other effect on them?

After our last class I read a little bit more about the controversy between Hooke and Cavendish. While the Royal Society privileged sensory experimentation, Cavendish warned that “our exterior senses can go no further than the exterior figures of Creatures, and their exterior actions, but our reason may pierce deeper, and consider their inherent natures and interior actions”. But Cavendish’s use of the metaphor pierce seems to distance her from a rationalist like Hobbes and the way in which he despised experimentalists: “[they] can get Engines made, and apply them to Stars; Recipients made…but they are never more Philosophers…For if you reckon that way, not only Apothecaries and Gardeners, but many other sorts of Workmen, will put in for, and get the Prize”. Is Cavendish’s ‘piercing’ just a metaphorical leap or was she imagining some sort of active contemplation? If I were to continue exploring this reflection based on exaggerating Vesalius I would want to explore further the strange simultaneity of contemplation and labor. What happens when a book on crafts or recipes is not used to replicate them? Does reading about one manual labor help in developing a completely different occupation? What relationship is established with matter when one reads about its handling, or is the spectator of its handling, but never actually manipulates it?