I decided to take the recipe assignment as an opportunity to explore how early modern women engaged with materials around them, and the ways in which they transmitted and preserved the knowledge acquired in their domestic labor. I started by looking for Spanish domestic recipe books of the period, and what I first found were manuscripts authored by men addressing a female public, like the Flor del Tesoro de la Belleza. Tratado de muchas medicinas o curiosidades de las mujeres by the veterinarian (!) Manuel Díaz de Calatayud, where the transcription of health and beauty recipes is often interrupted by moralizing sections. In fact, there is a sense that the recipes are just an excuse for the moralizing, because the author himself admits in his dedication that “vosotras sabéis ya la manera de hacer estas cosas” (“you already know how to do these things”). Calatayud is perfectly aware that he is only putting in writing the knowledge that they already have.

All these books included a mixture of cooking, medicinal, hygienic and cosmetic recipes without any separation, both in terms of their display on the page and in terms of the ingredients used for all these different areas, which often coincided. My impression is that, although at first sight they seem to be written without any clear order in mind, if there is a criteria to be found behind this order it seems to have more to do with groups of materials than with the uses and applications of the final products.

The authorship of all these manuscripts is unknown, but there are at least three different handwritings in each of them (in manuscript 1462 there are even two languages, Portuguese and Spanish), as if they were passed on from generation to generation. Some pages are left blank in between recipes, as if to encourage further annotations prompted by the experience of each new practitioner. While most recipes involve the manipulation of a list of ingredients, there are also some “oration recipes”, like this “Prayer to St. Anthony of Padua against worms”: 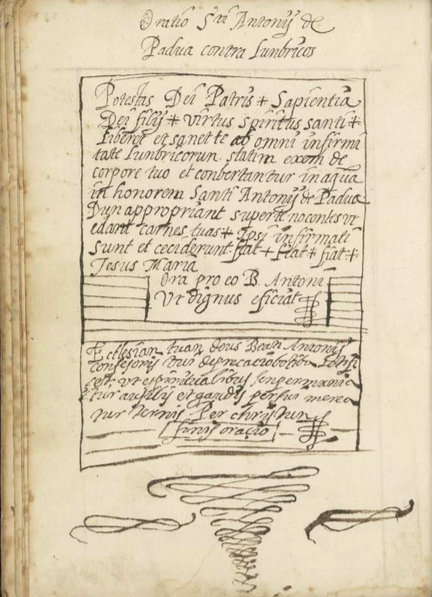 I also found some small pieces written in between recipes referring to domestic events, like this note detailing the date and cause of death of a female family member or friend. For these women, sharing these recipes in written form seems inseparable from memory and affect. 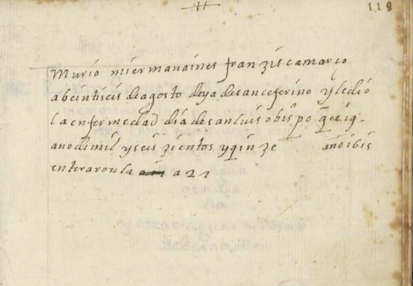 My first intention was to reconstruct the recipe for a xabón almizcado, which I believe could be translated as “musk soap”. I chose this recipe because it includes a set of materials that are very often used in many of these recipes, but also because the same recipe can be found in two of these books (manuscript 2019 and Manual de mugeres), which makes me think that it was widely known. The recipe reads:

The first challenge was to find out the names by which all these materials are actually known today. I then had to translate the ingredients I thought the recipe was referring to into English, so that I could actually find them here in Providence. Although I cannot avoid the compromises of these three-stage process, I feel that probably too many things are lost, or at least changed, in translation. My English translation of the recipe is:

As careful as I have tried to be with my translation, I feel that, even if linguistically this is the most approximate version, the triple textual translation has probably entailed a material distortion. Are the “sándalos cetrinos” accessed by these women the same as the green sandalwood I have been able to find here? It probably is something quite different. Also, the recipe does not specify the state in which some of these products should be used. Should they be liquid, solid, powder? Will these materials behave in different ways when they are in different states?

I was able to get most of these ingredients thanks to Amazon, and I am planning to get what I still need this weekend in New York (even the deer marrow). However, I realize that what I am going to do is probably not a reconstruction but an interpretation. These ingredients seem to be materials that these women used precisely because they were readily available: they explored their environment and learnt to use the properties and behaviour of quotidian materials. Making this recipe from Providence with materials brought from California by Amazon or acquired in New York obviously involves an approach completely distant from both the proximity to materials and the affective process involved in these recipes.

White soap and my grandmother

One of the ingredients listed in this recipe is white soap. I feel that just buying the soap would be a further betrayal, so I have decided to fabricate my own. Also, in an attempt to bring this reconstruction / reinterpretation closer to the initial spirit of these recipe books, I decided to ask my own grandmother to give me her recipe for white soap. I have grown up seeing her fabricate her own white soap, which she learnt from her mother, and her mother form hers. She does not keep a written recipe, however. Also, she has memory issues and she does not remember all the steps. However, when I was trying to make her remember, she said that the only way for her to remember it is to actually do it. She is going to make it again today, and my hope is that her embodied knowledge will be stronger than her memory.