I am reconstructing a recipe from the Traicté des eaues artificielles [Treatise of Artificial Waters] a 15th-century Middle-French treatise on medicinal waters and the virtues of different herbs (and a few other substances).  This is a challenging text, because it is for the most part just a list of the medicinal benefits of different combinations of herbs; instructions, even unclear ones, are exceptional.  When they do turn up, it’s because the recipe requires something beyond the unspoken base technique of the treatise.  For example, the recipe for “gold water” requires that you take melted gold and douse it in water forty times.  The recipe for “rosemary water” gives instructions for how long you’re supposed to let the mixture ferment.  You can also find instructions for some of the recipes at the end of the treatise, which seem to be supplementary and of different authorship—this includes another version of the recipe for “rosemary water.”  The entire printed treatise, according to a modern critical edition by Denise Hillard, seems to be a compilation of a couple of older manuscript works, so authorship/coherence is tough question.

Initially, I just wanted to reconstruct the recipe for rosemary water, but found out both that I would have to let it ferment for over a month, and that I required an ambiguous tool.  This brought me to the question of the alembic.  So, my line of inquiry begins with two woodcuts, each portraying a man (probably the author) instructing a woman (probably his patron, the ambiguous “countess of Bouloingne”) with a large, conical alembic.  I can only find one mention of an alembic in the text, in the recipe for the water of “mélisse” [lemon balm], which my Denise Hillard argues is part of one of the supplementary treatises.  In at least one edition, the woodcut appears next to the mention of the alembic.  But, this singular mention does not seem to be enough to warrant the inclusion of an entire woodcut, especially because most of the woodcuts are much more universal to the treatse—collecting herbs and an image of the author. 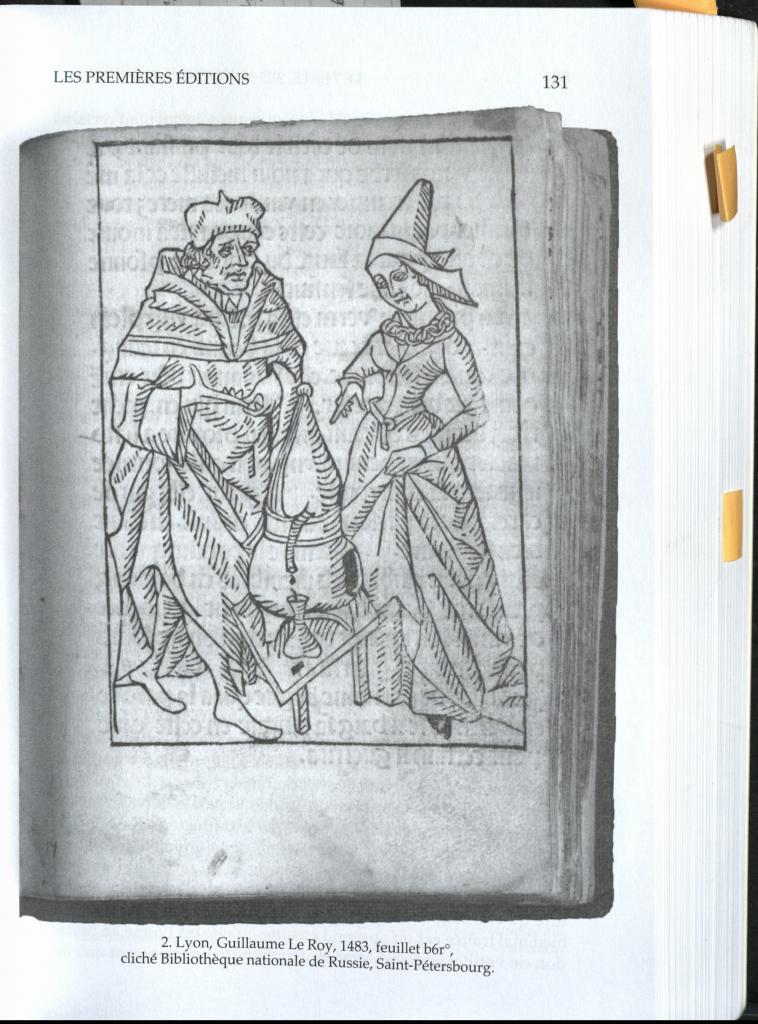 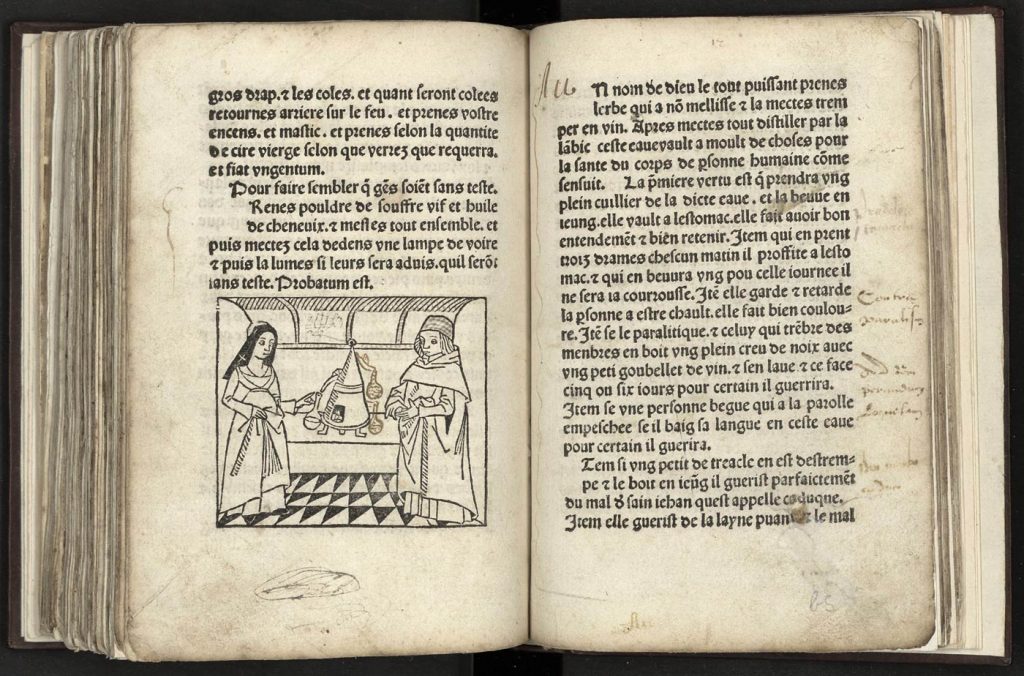 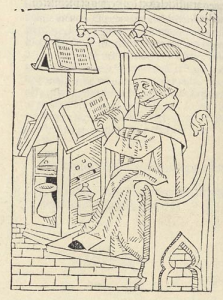 Depiction of the author, one of the other woodcuts from the 1484 Vienna edition. BM Troyes Inc. 544b. 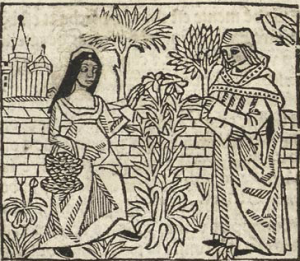 Collecting herbs in the Vienna 1484 edition. From BM Troyes Inc. 544b. 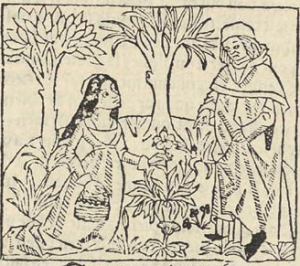 Collecting herbs in the Vienna 1484 edition. From BM Troyes Inc. 544b.

So, I went to Yiyi and asked her if she could help me make (read: if she could make for me while I watched attentively) an alembic after the design of those in the woodcuts.  Both Yiyi’s partner and Tillman Taape at the Making and Knowing Lab helped Yiyi and I figure out what was going on inside of the alembic.  In short, it is a somewhat conical glass shape that has a lip on the inside to catch condensation that drips down the sides, and a little spout out of which this trapped liquid flows out, ready to be used.  The base material sits in a little cylindrical base, which sits on top of some kind of furnace.  So, earlier today we went into the study and I watched Yiyi and Becca make the top piece of the alembic.  From here, we’ll (they’ll) make the cylindrical base, and I’ll figure out how I’m going to heat up the alembic without exploding it.  I have to decide if I want to use a Bunsen burner (likely from my roomate’s lab, as he’s a physical chemist), or if I want to pursue some sort of a clay furnace heated by charcoal, which would be more historically faithful. 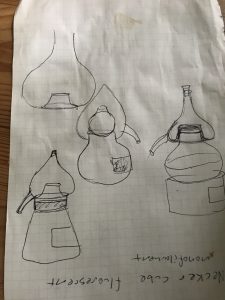 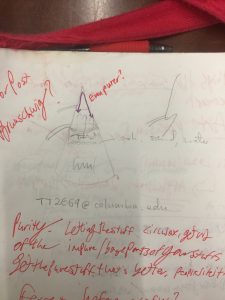 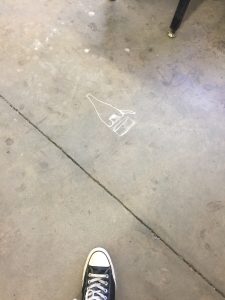 Yiyi’s plan on the floor of the hotshop.

Being in the hot shop today was a really enlightening and stimulating experience.  It made me think a lot more about the process of obtaining tools in the late medieval/early modern workshop.  Would people have known how to make their own in certain environments? Or would there have been dedicated alembic specialists who catered to a diverse audience of alchemists, medical practioners, and curious nobles? I also thought a lot about the process of communication and trial and error, and how loud a late medieval/early modern workshop must have been with people yelling out instructions and expletives.  As an observer, I thought about if there would’ve been someone in my place.  A patron? A humanist? Someone looking to buy an alembic? It made me think a lot more about the social and commercial networks that the workshop environment necessitated.  I came in with my book, which got a little dirty.  How would the literatus observer/practitioner have kept their books in the workshop? 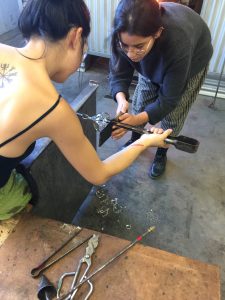 Yiyi and Becca making some glassware 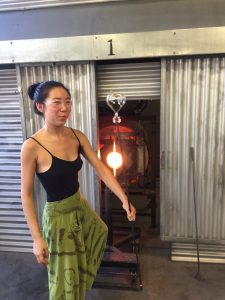 Yiyi with a cool glass form. 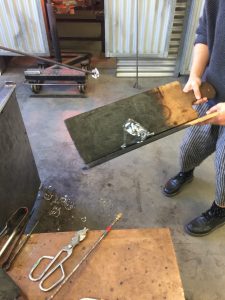 This is, in essence, a really roundabout way for me to say that I haven’t figured out exactly which artificial water I’m going to distill.  I definitely want to create one of the waters that doesn’t provide any accompanying instructions, because I want to see if I was correct about the alembic being the unspoken core of this treatise.  Fennell seems promising, as does sage.  But there is also a part of me that wants to try to make the gold water as well, if I’m successful with one of the simpler recipes.  I’ll figure this part out as I go along, but it’s ultimately become my secondary question.