What do Singaporeans Speak? Introducing yourself as being from Singapore can be a useful icebreaker – it often leads to interesting conversations during which you expound on where/what the heck your home country is. Being from a tiny city-state approximately the size of New York City (the City, not the State) means that you get used to many people wondering whether Singapore is part of China. Also, you get tons of compliments on how good your English is.

While doing research for this article, we found that Google’s answer to “what do Singaporeans speak” was English. This did not come as any surprise, since many Singaporeans in the US are proud of the K-12 English education most of us have received, and while abroad, we sometimes find it tiresome to be constantly complimented on English skills – occasionally, it even strikes us as a little ignorant. (If you had spent your whole life speaking in English, surely it’d be your best language?)

However, we were surprised to find the 2010 census [2] reveals that just 33% of Singaporean residents spoke English at home. According to the census, the rest speak a mixture of Mandarin, Chinese dialects, Malay and Tamil. While one may immediately jump to socio-economic reasons to understand the differences in the languages spoken at home, in Singapore’s case, it is important to consider generational differences.

Singapore’s linguistic history is inextricably tied to both colonialism and decolonisation. Under British colonial rule, the various ethnic groups were accommodated through schools that taught in English, Malay, Mandarin Chinese, and Tamil. A year after Singapore gained independence in 1965[3], the government established a bilingual education policy, designed to ensure that Singaporeans spoke both English and their mother tongue. Thus, most young Singaporeans, having grown up after these policies were instituted, speak English as their first language. When you look at our parents’ and grandparents’ generation, however, there is far more diversity in what they speak. Despite the growing dominance of English, many young Singaporeans are fairly adept in their mother tongue, and many are effectively bilingual.

With such a diversity of languages, it is no wonder that one gets a similar diversity of answers to the question of what Singaporeans speak, depending on who is asked. That being said, one thing can be agreed on: English is the official lingua franca that unites us in school, at work, and in coffee shops and restaurants. But it isn’t plain old British English that binds us linguistically; we have a form of English moulded to suit our environment and communication needs. To be even more specific, it is Singlish, or Singaporean English, that makes communicating with fellow Singaporeans unique.

Over the years of Singapore’s development as a multiracial and multilingual nation, Singlish has emerged as an eclectic mishmash of English combined with phrases and words from various Chinese dialects, Malay, and occasionally Tamil. It is almost a linguistic pie-chart of sorts, reflecting Singapore’s ethnic makeup of around 70% Chinese, 15% Malay, and 10% Indian[4] .

This unique Singaporean slang has proved resilient to the government’s efforts to stamp it out, most notably through the “Speak Good English” campaign[5], which was launched in 2000 by the Prime Minister of the time, Goh Chok Tong. When announcing the campaign, Prime Minister Goh described Singlish as “English corrupted by Singaporeans,” reflecting the view of purists that English should conform to the standardized British version as much as possible.

An interesting aside here is that there are subtle class implications of the use of Singlish. Perfect and grammatically correct English, perhaps spoken with a slight British or American lilt, can be seen as hoity-toity and pretentious. This is possibly because standardized, unadulterated English is more likely to be spoken by better-educated individuals, or those who have been educated abroad. There is in fact a derogatory phrase used to describe individuals who are perceived to be more “Westernized”: “jiak kantang”, where “jiak” is “eat” in Hokkien and “kantang” is “potato” in Malay. This translates into “[a person who] eats potatoes”, relying on the assumption that potatoes are the staple food of the West [6]. Everyday conversations in Singapore’s heartlands often feature sentences, phrases, and accents that would, by and large, not be considered ‘correct’ English. As a result of Singlish often being considered the “authentic” vernacular spoken by the masses, many Singaporeans are fiercely protective of their rights to corrupt the English language with their own embellishments and rules.

HOW SINGLISH FITS INTO SINGAPOREAN SOCIETY

What makes Singlish so necessary and unique to Singapore (and therefore so passionately defended) is the same thing that makes Aussie English such a distinctive part of the Australian experience. Australian words like ‘barbie’ (barbecue) and ‘arvo’ (afternoon) emphasize the strong desire to abbreviate, while words such as Sandgroper (referring to Western Australians) and cactus (used to described a useless object) articulate shared experiences of “the bush and the beach”. Similarly, Singlish is the art of using shared metaphors and images to make sense of our environment. As with any other hybrid language, Singlish challenges the limitations of English by adding words that better express the Singaporean experience and borrows from the structures of Malay and various Chinese dialects.

Singlish is often able to capitalize on the brevity of key expressions from various languages or dialects, which makes many phrases much shorter than their English equivalents. Additionally, Singlish can function as a window into the Singaporean psyche. An example is “blur sotong”, or dazed squid, an endearing insult used to describe an absent minded individual. This particular phrase is probably the result of our familiarity with the silly-looking animal because of its prevalence in Singaporean cuisine. Other words express the struggle of the daily grind. It is not uncommon to hear exclamations of how “sian” (tiresome) life has been and how that midterm has gotten us all “kancheong” (nervous and keyed up). We even give a special nod to our strong, paternalistic (but well-respected) government with the nickname “the gahmen” so that it’s convenient to say things like “the gahmen will handle it” or “I blame the gahmen”.

There is almost a subtle pressure on those of us who speak “uncorrupted” English at home to slip Singlish into our speech to better communicate with our Singaporean counterparts on the streets. On the flip side, those of us too comfortable with our street speak find ourselves putting on slight international accents to snap into ‘academic English mode’ when giving presentations or speaking to potential employers. Foreign friends who visit will find that Singaporeans are skilled code switchers who can, in the same breath, order food in an impressive mixture of Singlish and Hokkien, and then return to conversing in “normal” English.

SINGLISH AS SEEN BY THE OUTSIDE WORLD

It is not uncommon for tourists wandering the streets of Singapore to find that the local strain of English takes some getting used to, both because of the many non-English words and phrases that Singlish borrows from, but also because a stereotypically thick Singaporean accent is difficult for the uninitiated to understand. Singaporeans are generally adamant that this is not indicative of our poor English standards – after all, your struggle to understand us probably isn’t much different from the experience of going to Scotland and finding yourself struggling for a few days with the Scottish accent and slang. 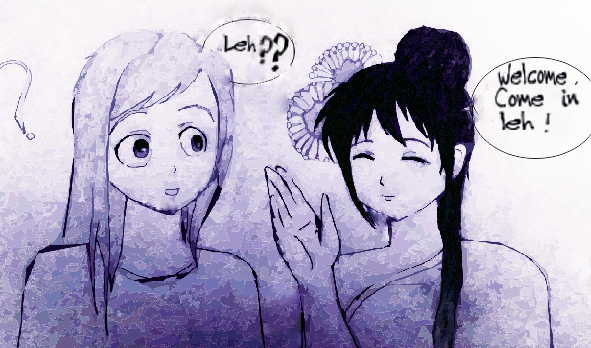 SINGAPOREANS AT BROWN AND OUR SINGLISH EXPERIENCE

It is not surprising that the people who remark on the strangeness of Singlish are those who have actually visited our little island and have seen the locals jabbering in rapid slang. Most Singaporean Brunonians come from high schools where most students communicate exclusively in the English language; many also speak non-Singlish English with their friends and families. Thus, Singlish goes mostly into hiding when Singaporeans go abroad – with a few exceptions. To some, teaching others Singlish is an opportunity to introduce people to Singaporean attitudes and humour. To others, speaking Singlish when encountering fellow overseas Singaporeans is a way of establishing familiarity. In many ways, using Singlish is like communicating in an exclusive secret language. There is a certain sense of satisfaction and relief one gets from being understood in expressions that do not make sense to most of the English speaking world. More than that, it is infinitely comforting to verbally make sense of the world the way we know how: in a delightful mix of tongues we have christened as our own unique brand of English.

← Being A Rhode Islander at Brown
Sights and Sounds: Korean Poetry “My Heart” →