IWB / May 8, 2015 / Comments Off on Debunked: Indonesia Edition / Cross-Cultural, Language

Despite Indonesia’s rich biodiversity, enormous size, and title of the world’s fourth most populous country [1], it is quite a shame that Indonesia is still relatively unknown on the international stage. Most non-Indonesians we’ve met aren’t even able to place Indonesia on a map (someone asked us, “That’s near China, right?”). Many also assume we don’t have high-rise skyscrapers and malls, which is absolutely false! Trust us, if you visit the capital city, Jakarta, you will be amazed at how modern and enormous the malls are. In spite of this, there is still extremely stark inequality within the city in terms of socioeconomic status, with child beggars and slums right outside of the city center.

Here are some questions as well as common misconceptions people have about Indonesia. Believe it or not, these are real questions that we have been asked .

Actually, I’ve heard of Indonesia before! That’s in Bali or something, right?
Bali is actually part of Indonesia! With more than 17,000 islands, Indonesia is the largest archipelagic state in the world, by population as well as area [2]. In fact, not only is Bali its own island, it is actually also one of the 34 provinces in Indonesia.

This is actually one of the most common misconceptions about Indonesia. We don’t blame people though. Bali is definitely an awesome tourist destination. Indonesia actually has an incredibly vast landscape, with over 108,000km of beaches and 400 volcanoes (more than any country in the world [3], and 130 of those 400 are considered active! [4]). Moreover, Indonesia is the second leading country in terms of biodiversity [5] and also second in terms of total endemic species [6] .

Bali is great! Is there any place in Indonesia other than Bali that’s worth visiting?
While Bali is indeed a wonderful place to visit, there are a lot of other lesser-known tourist destinations that are just as beautiful! Our list of some must-visit places in Indonesia include:

So do Indonesians speak Indonesian?
Not too long ago, we overheard a conversation concerning Indonesia, in which one person asked the exact same question to a non-Indonesian. The response given was, “I don’t know, probably some tribal language.” While it is true that over 726 [7] different languages are spoken in Indonesia, the official language of Indonesia is actually… Indonesian, also known as Bahasa Indonesia. That being said, in a 2010 government survey of Indonesian citizens above the age of 5, less than 20% claimed to speak Indonesian as their first language [8] , because the majority grow up speaking their ethnic language. Bahasa Indonesia is the primary language of commerce and travel, so we’d speak Bahasa Indonesia when conversing with Indonesians of other ethnicities, but speak our own language (for example Boso Jowo, Basa Acèh, Basa Sunda, etc.) when conversing with Indonesians of the same ethnicity. This makes the majority of Indonesians bilingual, or even trilingual!

That’s right! The languages spoken in Indonesia actually amount to about 10% of the world’s languages [9] . Although there are certain similarities among these 700 languages, they aren’t dialects, and they are also not mutually comprehensible.

Is it true that Indonesia is an Islamic country?
Because Indonesia has the largest Muslim population, with 88% of Indonesians being Muslim [10] , people assume we are an ‘Islamic country’. However, we do not implement the Sharia Law (although Aceh—one of the provinces in Indonesia—does), and we do not have Islam as our only state-recognized religion either.

Indonesia is technically a constitutionally secular country, but the first principle in Pancasila—our philosophical foundation—says, “Ketuhanan yang maha esa”, which can be roughly translated to “belief in the one and only god.” Religion thus plays an important role in the lives of Indonesians, and everyone is expected to have a religion. There are six religions officially recognized by the government: Islam, Catholicism, Protestantism, Buddhism, Hinduism, and Confucianism.

The religion diversity in Indonesia dates back to centuries ago, long before the country was even established. The oldest known ancient kingdom in Indonesia was a Hindu kingdom called Kutai Martadipura. Subsequently, some other ancient kingdoms were founded and ruled different parts of Nusantara (the word we use to refer to pre-independent Indonesia). For instance, Borobudur Temple was built by the Syailendra Dynasty, whose official religion was Mahayana Buddhism, in the 9th century. The three major religions of these kingdoms were Buddhism, Hinduism, and Islam, all of which remain present in modern-day Indonesia.

As for Catholicism and Protestantism, these were brought by Western missionaries who came along with Portuguese and Dutch explorers and traders. The latter began a trade company called the Dutch East India Company (which also happened to be the richest company of all time [11] ) and greatly influenced Nusantara for more than three centuries. Confucianism, on the other hand, was not present in Indonesia until the arrival of Chinese immigrants in the 1800s. It is mostly practiced by few Chinese Indonesians, who, in total, make up 1% of the population [12] .

Indonesia’s a pretty small country, right?
It is massive, both population and area-wise! We have recently exceeded the 250 million people mark, and we are the fourth most populous country after China, India, and the United States. In terms of geographical size, Indonesia from west to east is longer than the distance from Washington to Maine! 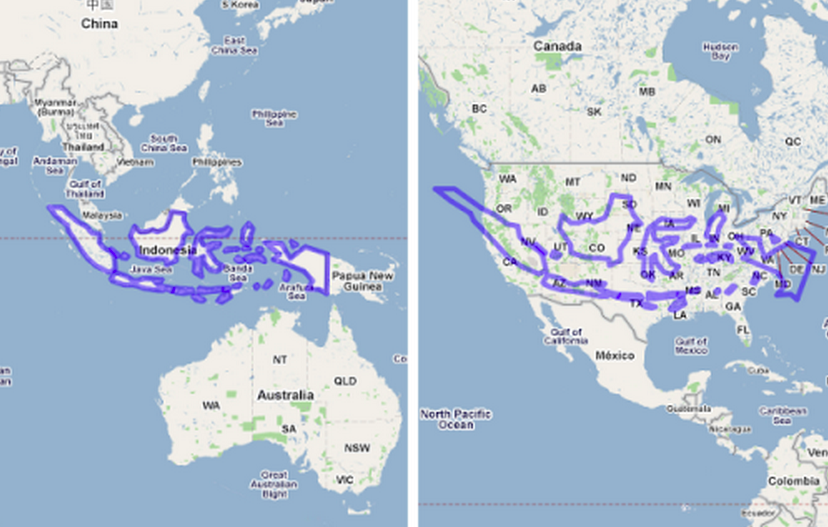 Isn’t Indonesian food similar to Indian food, with lots of spices and stuff?
We feel that there isn’t a single answer to this question, as there are so many types of Indonesian food. But generally, Indonesian food is spicy and served with white rice. Some Indonesians feel like they haven’t really had a fulfilling meal if they don’t eat rice.

The most well-known Indonesian cuisine is perhaps Masakan Padang, which translates to “Padang food” in English. Masakan Padang is the traditional food of West Sumatra, and it is in fact named after the province’s capital city, Padang. It consists of several types of meat and vegetables involving lots of spices and coconut milk. Some favorites include the infamous beef rendang, which refers to curried beef slowly cooked in coconut milk and ground spices–it takes more than 8 hours to cook! (Fun fact: it is named by CNN Travel as the world’s best food), curried cow brain and beef tendon, as well as ayam pop (fried chicken seasoned with various spices, such as ginger, galangal, and lime leaves). Another interesting thing about Padang food is the way it is served! If you go to a Padang restaurant, you will be served with at least ten plates of various dishes half stacked on top of each other. You can pick whatever you want, then you pay for what you eat.

All said and done, if we were to describe Indonesia in one phrase, it would be…
Bhinneka tunggal ika. It means unity in diversity. Indonesia really is a very diverse country—in terms of ethnicity, culture, languages as well as landscape—and we often find ourselves scratching our heads trying to generalize all 250 million of us. A person from Padang will speak a different language, eat different types of food, and dress differently compared to a person from Ambon.

Debunked, is a new IWB series in which writers from different countries/cultures will ‘debunk’ common misconceptions about their nation and culture.

If you’d like to contribute to this series, send us an email at [email protected]!

← Broken String
Reflections: On Being International →