STAR WARS: The Wuxia Film With No Asian Warriors

IWB / March 20, 2016 / Comments Off on STAR WARS: The Wuxia Film With No Asian Warriors / Cross-Cultural, US Culture 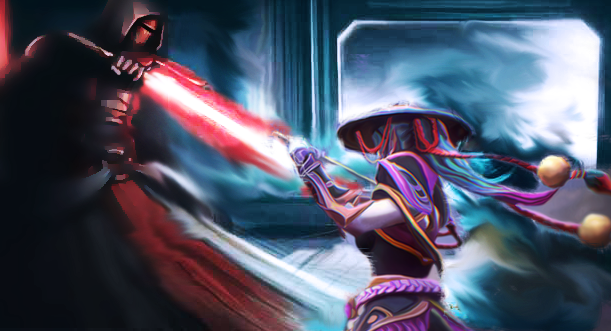 It is common knowledge that Star Wars is essentially a wuxia/samurai/Asian warrior flick set in outer space. The lightsaber is like a high-tech sword or spear, depending on the design, and the famous supernatural “Force” appears to be a combination of the “Qi” (inner force) in Chinese martial arts and the Japanese mind tricks of Ninjutsu. My parents and I, and perhaps a lot of other Asians, have always watched Star Wars through the lens of Asian warrior stories. It all makes sense – the Jedi are the zhengpai (the good-guy-squad) like Shaolin and Wudang while the Sith are the evil chejiao (cults) like Mingjiao. #ThanksLouisCha

George Lucas himself has also said many times how writing Star Wars was inspired by the samurai movies he loved watching, and that the acclaimed filmmaker Akira Kurosawa is his hero. Toshiro Mifune, famous onscreen samurai, was in fact cast as Obi-Won Kenobi in the original series, only to have rejected the offer due to his old age. Besides that, Mifune’s daughter recounted that the role of Darth Vader was also offered to her father. So what always confused me was how there were no lightsaber wielding Asians in the past 7 STAR WARS film – on both the light and dark side.

I mean yes, it sucks that George Lucas could not get Mifune on board but that was just one guy. The fact that no Asians were ever cast since then to be a Jedi (besides one extra in the background of The Clone Wars — and YES, the Asian community noticed even that) hints at a repeated problem in Hollywood – that the only role for Asians in an action film is as a kungfu master or a martial arts villain. Or you know, guy in the background. (Hello Asian Star Wars fighter pilots with no names!) And nothing else. I mean the only Asian they bothered to cast in the oh-so-horrible Dragonball Evolution movie happened to be Chow Yun Fat as Master Roshi while the hero Goku was still played by a white guy. We see more and more Lee Byung Hun in Hollywood these days but he is always the villain with crazy fighting skills. That dude was a romantic lead in Korea! I guess somehow perfect male lead features still aren’t good enough for Hollywood if they are chiseled on an Asian man, even if he has lots of male lead experience.

“But they cast Donnie Yen as a Jedi!” I can hear a Star Wars fan boy screaming across the interwebs, “He will be in Episode VIII!” Eight is the Chinese lucky number, but it is quite a disappointing number considering that this was how many films the series had to go through before giving Asians some representation. And that too in a film series that was inspired by Chinese and other Asians who had such a significant role in developing the art and filmmaking of sword wielding badassery. Moreover, many have pointed out the strategic decision to cast the Ip Man star, who has expertise in multiple styles of martial arts, was due to the growing profitability of the Asian market as seen with films like Transformers and The Avengers. So money finally pushed the decision for the film company to finally cast an actor closest to a real life Jedi as a Jedi.

Maybe I should not be complaining. Things are getting better. Asians are starting to take on more roles in American TV and cinema, with shows like The Walking Dead, Fresh Off The Boat, My Crazy Ex-Girlfriend and the short-lived Selfie, all having well-liked Asian lead characters that are not kungfu masters. And maybe Asians will play increasingly important roles in the Star Wars Cinematic Universe. We had Mace Windu, a black man and one of the strongest Jedi duelers of all time, as a supporting character in the prequels. Then voila, a black storm trooper, Finn, is now the male lead of the new series. Maybe after Donnie Yen, we will finally have a badass Asian hero/heroine we deserve. We now have Rey leading the way for girls so anything is possible, right? Right?!

That’s the mentality I guess I must live with as the person who has no say to what happens behind the camera. I will continue to be annoyed at the lack of Asian Jedis but still go watch the Star Wars films with renewed hope every time. Just like how every time I get noodles at Andrew’s Commons and see the words “Lo Mein” and muse to myself that that’s not how proper “Lo Mein” looks like or is even made. Yet, I still eat it, hoping that it will have subtly improved since the last time I ate it.