As a student in my eighth year of Spanish language instruction, I feel relatively comfortable speaking up in my Spanish classes and discussing subjects such as literature and history. However, I still have trouble understanding the everyday conversations of people I pass on the street. Part of this is due to the speed at which Spanish speakers converse (Spanish really is spoken at a faster rate than English!), but part of my confusion comes from all the slang terms everyday Spanish speakers use in casual conversation. To try and improve my skills, I asked my friends and searched the Internet for interesting slang terms that most Spanish students would not be taught in the classroom. I have included some of my favorites here.

To be clear, all of these terms differ by region and/or country. I have specified where each of these terms is most commonly used. I have also rated each term on a 1-5 scale of appropriateness. “1” means “You can say it in front of your abuela” and 5 means “Wash your mouth out with jabón!” (Sorry, the highest rating for the words I have chosen for this article is a 3.)

Disclaimer: I have tried to research everything as thoroughly as possible, but as a non-native speaker I may have still made some mistakes. You can let me know (nicely!) in the comments if there’s something that should be changed. 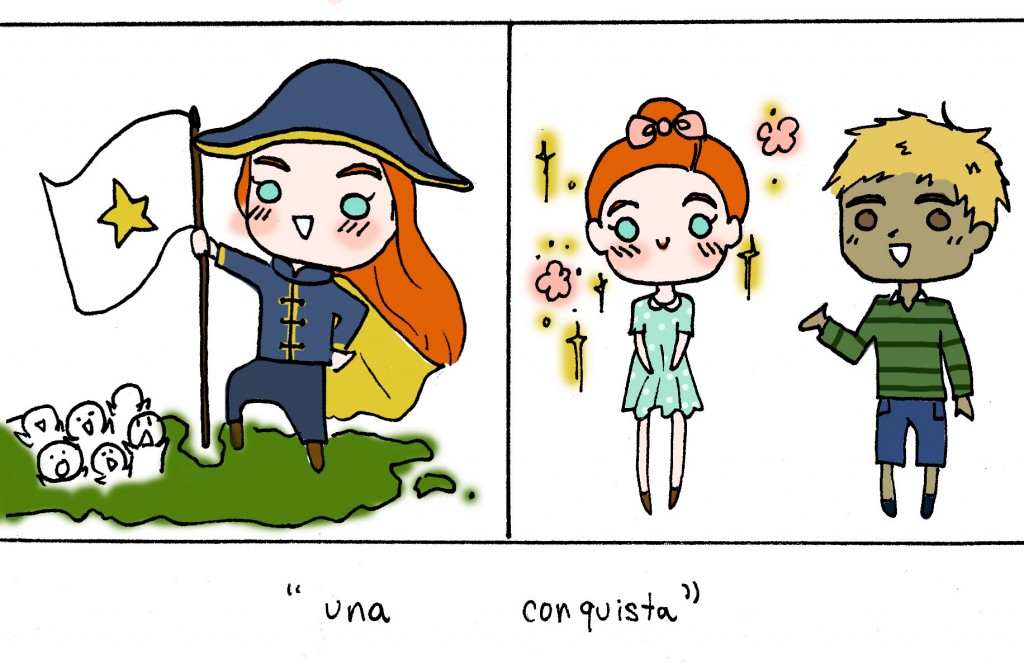 Literal translation: “a conquest,” or “a conquered one.”

Origin: As far as I know, “conquista” is Colombian. (By the way, for any Spanish learners out there, the Colombian accent is definitely one of the easiest to understand, and it has become the accent that I personally want to be able to mimic!)

Additional Notes: Technically, this is not really a Spanish slang term. A few weeks ago, my Spanish professor was struggling to remember how to say “trophy wife” in English. “Trophy man? Man trophy?” he guessed. We soon figured out what he was trying to say, but it left me curious: what was the translation of “trophy wife” in Spanish? I e-mailed my Spanish professor to ask him. Interestingly, he responded that there is no direct translation of “trophy wife.” (Leave it to the land that brought us Real Housewives to come up with a term like that.) Instead, “una conquista” refers to a woman who a man might “show off” to his friends as a momentary girlfriend, a bit like a “fling” in English.

Rating: 2 (“Conquista” is not itself a bad word, but you probably don’t want to show up at your grandmother’s house and start bragging about your “conquest.”) 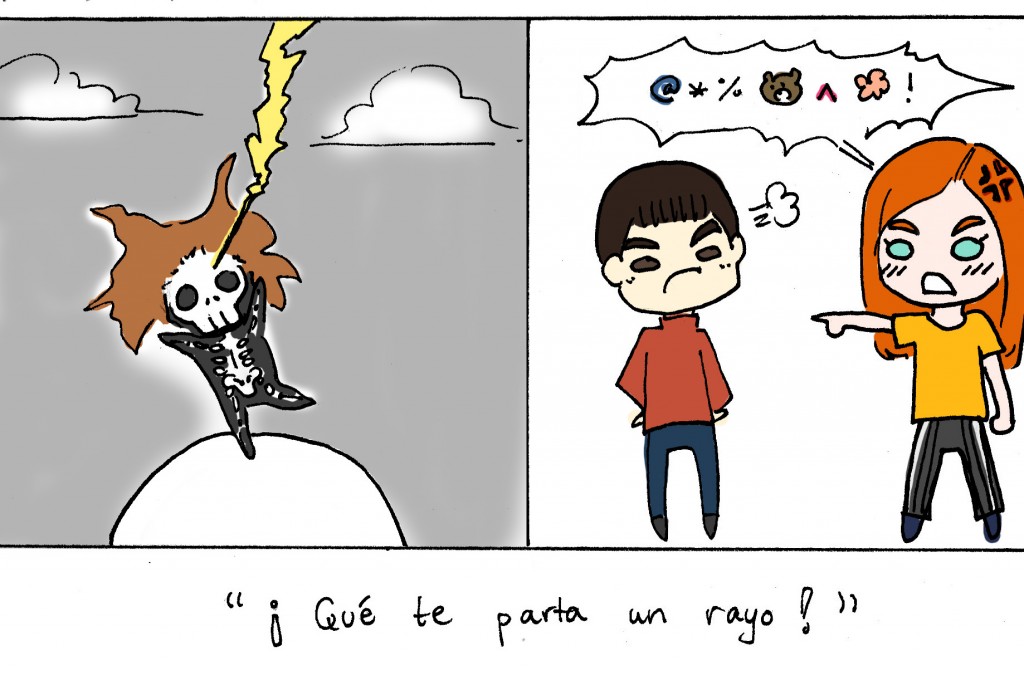 Origin: It is used in Spain and various countries in Latin America (Argentina, Venezuela, perhaps some others).

Additional Notes: This phrase roughly means, “I hope you get hit by lightning!” It refers to some sort of god such as Zeus smiting someone with a bolt of lightning. This phrase seems to be outdated in Spain, but it is still used in certain Latin American countries. It is also the name of a song by a Dominican rapper named “Mr. Saik.”

Rating: 3. This phrase seems to be a more polite way of telling people to “f*** off.” 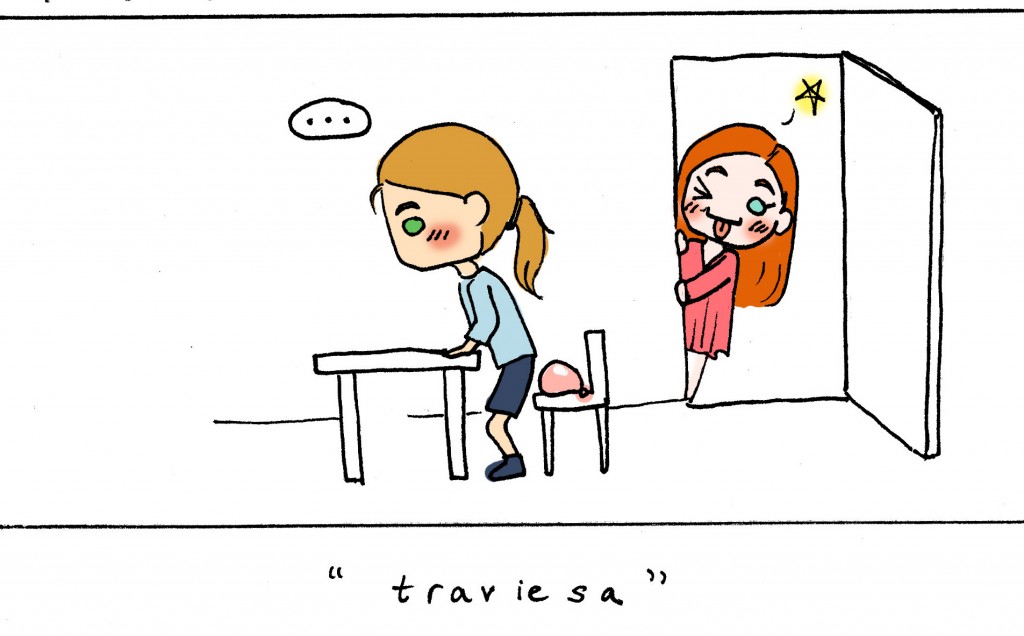 Literal translation: “mischiefs,” “pranks.” The person who pulls the pranks (the “prankster”) is a “travieso” (if a boy) or “traviesa” (if a girl).

Origin: Venezuela. It may be used in other countries as well; I could not find much information on this word’s origins.

Additional Notes: “Travesuras” are not serious pranks. They are funny, harmless tricks, usually done by a child. This word reminds me of another Spanish word, “niñerías,” which means something like “silly thing,” “childish thing,” or “triviality.” A more serious prank would be called a “maldición,” a word that can also mean “an evil spell.” 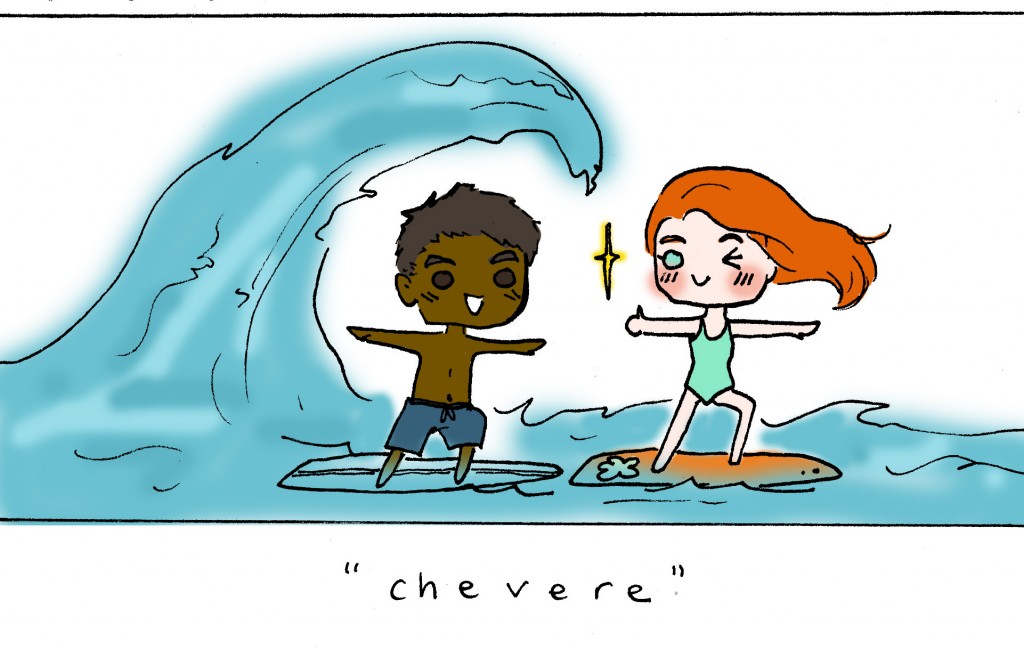 Literal translation: There may not be any literal translation, but “chevere” has roughly the same meaning as “cool.” I have also been told that it means “Awesome!!!!!” (Yes, with all the exclamation points.)

Origin: A friend told me that this word is a “caraqueña” (a word from Caracas, Venezuela), but another friend from Peru also mentioned this word. Then again, I found an article online that called “chevere” “the most Venezuelan word to ever exist.” So I’m guessing it’s common mainly in Venezuela with a few outliers in other countries.

Additional Notes: In Peru (and perhaps in other places – I’m not sure!) this word is associated with wealthier classes. You have to say it with the right “accent.” “Chevere” is a common term among surfers. For example: “¡Qué chevere tu tabla de surf!” (What a nice/awesome surfboard!”) I am just speculating here, but “chevere” might be a common term on the coasts (both Caracas and Lima are right by the ocean). 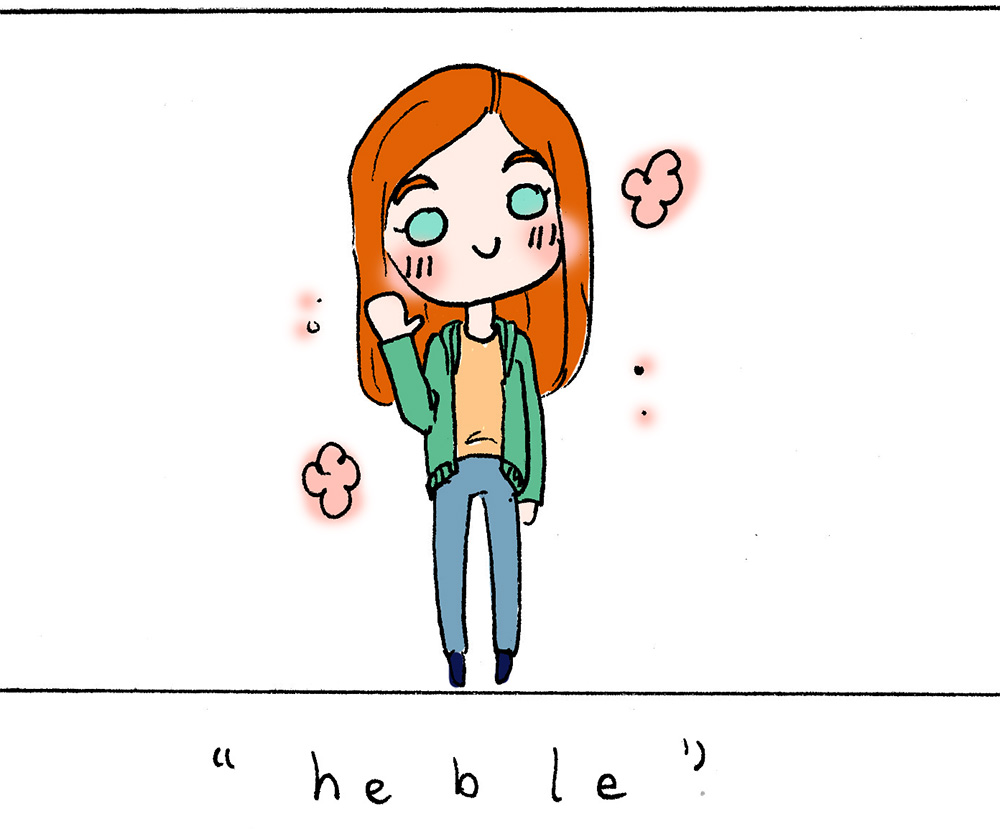 Literal translation: “Heble” is a conversion of the word “habla,” which can also be a slang term. “Habla” means “speak,” but “heble” doesn’t really mean anything at all and is just another way to greet friends, such as “hola” (hello) or “qué tal” (what’s up).

Additional Notes: There is not much to add. There is scant information on this term online, but I thought it would be useful to include it because it seems like a fun and common term to add to one’s everyday vocabulary.

Origin: Spanish (this phrase may be currently out of fashion – my friend told me that her Spanish great-grandmother used to say it)

Notes: Both phrases refer to the traditional Spanish bullfights. The first phrase, “Are you going to the bull fight?,” is used colloquially to ask someone if they are going to do something fun or exciting. If someone looks very happy to be going somewhere, you can ask them that! The second phrase, “Did you return from the bull fight?”, is ironically used in a very different context. If someone returns from someplace looking very tired or annoyed, you ask them if they are returning from the bull fight. Supposedly, everyone is excited to go see the bull fights, but they just feel tired and frustrated by the time they come back home.

Thank you to Professor Felipe Martinez-Pinzón, Isabella Martinez, and Augusto Ballón for their help with this article.