One of the beauties of a liberal college campus today in the U.S. is that it is full of discussions about the nuances of life, social categorizations and boundaries. There is a regular push for acknowledgment from various minorities, including but not limited to today’s most popular topics: race, gender identity, sexual orientation, and class. With the general trend of embracing diversity, it seems somewhat ironic that international students tend to be lumped together and dismissed as a monolithic minority.

You would be hard pressed to find a more heterogeneous minority on campus. Yet most people are content to lump us all together as one clumped minority of foreigners, tossed into a bundle despite each coming from different backgrounds from across the globe.

Foreign nationals have usually spent the overwhelming majority of their life in their home country, before taking a leap of faith and coming over to the U.S. for university. These students could obviously be further subdivided by nationality, or, to follow the American trend, by state. However, such distinctions are usually overlooked since there would only be a handful of people eligible for the states of Karnataka or Rajasthan, despite the differences between the two Indian states being just as distinct as those between Texas and Connecticut. These are your burgeoning internationals.

Internationals exist between two or more nations, though their identities are firmly forged in one culture during their developmental years. They are foreigners who have either lived a good portion of their lives in the U.S. prior to college, or U.S. citizens who have lived abroad long enough to absorb some of the foreign culture and hold on to the “international” label upon returning home. These students could also be further divided based on where they’ve lived, for how long, and so on.

Then there are Third Culture Kids. Often abbreviated as TCK, this term was originally coined in the 1950s by the American sociologist Ruth Hill Useem, who defined it as a child raised in a culture that differed from that of their parents for a significant part of their developmental years. TCK is a term that seeks to define the unique “third culture” that is developed and appropriated by the child as they blur traditional lines of belief and cultural heritage, assimilating a conglomeration formed from pieces of their parents’ and their country’s culture. With this definition in mind, first generation immigrant children also fall into the TCK category. We are often bilingual or multilingual, and frankly usually have additional “fourth,” “fifth,” and “sixth,” cultures, having moved around multiple times. To most people, the term TCK has come to be synonymous to other labels such as global nomads, cultural hybrids or cultural chameleons.

In the words of Mark Twain: “Travel is fatal to prejudice, bigotry, and narrow- mindedness, and many of our people need it solely on these accounts. Broad, wholesome, charitable views of men and things cannot be acquired by vegetating in one corner of the earth all one’s lifetime.”

Intimate familiarity of hopping between cultures defines TCKs, and the way I see it fate has rolled us an incredibly valuable life full of opportunity. Being a TCK constructs your character, and goes a long way towards guiding your lifestyle and choices, but the circumstances of this molding childhood are completely beyond our control. In short: we got lucky.

Since being a TCK is a near-foolproof recipe for a certain type of mentality and approach towards life, TCKs have many similarities. Yet we could easily be further subdivided based on nationality, country of birth, country of residence, and so on. Yet if one were truly to do so, chances are at least 90% of us would be stranded in single-person groups.

Each of us is unique. And while in a country that values individuality, this is something to take pride in, it also means that we are culturally unique. We have unique traditions, unique views, and unique behaviors that few people can mesh with their expectations. We have relationships with all the cultures we have been immersed in, and while I can only truly speak for myself, I know that I do not feel comfortable claiming full ownership of any.

Despite our obvious differences, having lived in different countries, speaking different languages, and holding different passports, I feel that dividing TCKs into subcategories is not only nearly impossible but also unnecessary: TCKs have an intrinsic sense of belonging and familiarity with other TCKs. It’s the adaptability of our characters, the ability to change everything, to pick up and leave to somewhere completely unknown with very little notice, that binds us together. It’s the conditioning of a coping mechanism to not form assumptions from early childhood; the understanding that it is not ethnicity, phenotype, gender, sexual orientation, age or even nationality that defines a person. It’s the curse of never quite fitting in completely, and the gift of being able to fit in almost anywhere. The restless near inability to stay in a single location; the understanding that “home” is a notion built around people, not a particular place; the familiarity with travel. The fact that your friends and loved ones are comprised of incredibly racially, religiously, culturally and politically diverse people, and that they and your memories are scattered around the globe (a fact which you simultaneously treasure and hate). The incredible exposure to life’s diversity; the familiarity with both the privileges and scorn wrought from different forms of racism and sexism; the “old” eyes, the practice at saying goodbye.

Apparently according to recent studies, we’re more prone to depression and loneliness than other groups — though we’ve also got a thicker hide and a more independent spirit.

To be fair, we are the trickiest group of people to categorize since most
often we fumble with the questions of where we are from or what culture we “belong” to. On one hand, it’s easy to understand generalizations since most people would either get a headache or have to spend a rather significant portion of time with us in order to be able to determine which stereotypes to label us with. On the other, it’s incredibly frustrating that simply because we don’t fit in any traditional mold that we are constantly judged as something we are not. And realistically, I can’t see that changing any time soon.

There are groups for students of color, for women in science, and so on. Yet to the extent of my knowledge there is only one program for the cohesive “international” mass at Brown University: the International Mentoring Program (IMP), preempting the general Freshman Orientation for a couple of days, with a few scattered events throughout the rest of the year. All international students have many things in common: we’re adaptable, and have learned to embrace change. We are all outsiders until we learn the local lingo and references, understand cultural norms and social bonds. We all travelled, of our own volition, away from our “home” country, taking a leap of faith into the unknown when deciding to come to the U.S. for college. Generally we’re all independent and relatively used to dealing with life’s challenges on our own, simply because there is no one to reach out to in the same time zone.

Perhaps this fierce independence and self-reliance is part of the reason that we don’t tend to make much “noise” on campus. We don’t demand incredibly specialized sub-divisions and programs because we simply don’t need them; we’re perfectly capable of coping without. Nor would such a demand be practical.

Quite honestly, while I find myself perfectly content with the status quo, I would appreciate an acknowledgement of the existence of our differences by the general population.

I can appreciate that a change in mentality is a higher demand than a change in policy or organization. Yet as the world shrinks through ever-increasing globalization, I would hope it’s not unreasonable to wish that people would cease to base their judgments of others primarily on phenotype. TCKs are not alone in finding it incredibly depressing to be saddled with an entirely foreign identity in one glance, for people to think that they know everything about you based on a brief exchange and a vaguely unidentifiable but easily dismissed accent. It’s exhausting to have to dismantle and rebuild someone’s perception rather than simply crafting it through interactions over time.

A good place to start may be to cease being so defensive when an international student asks, “where are you from?” instead of, “what state are you from?” I can understand, from a historical context, why the seemingly innocuous question is seen as a subtle slight, an indication that the person does not truly belong in the U.S. But please understand that for the overwhelming majority of people coming from abroad, that question is posed as a courtesy, indicative of a conscious effort to not make an uninformed assumption about the person they are talking to. Take it as a show of respect, and demonstrate that same respect to others by asking them in turn where they are from — don’t take it as an affront or an act of aggression.

Should you simply make an uninformed assumption, when the misconceptions are eventually cleared away you will feel rather foolish. The new tag you’ll hurriedly paste over your friend, “not American?!” will be chained to distasteful undertones implying that “this changes everything.” That this alteration in the identity you had constructed for someone else can cause you to reevaluate your current relationship will be hurtful.

You don’t want to ask people where they’re from because you don’t want to make them feel like they don’t belong? Congratulations, you already have. You can’t guess a TCK’s identity; since our greatest qualities stem from our diversity, strange cultures and unique perspectives that define us. It’s destabilizing to have our identities dismissed because people don’t feel comfortable enough to ask. 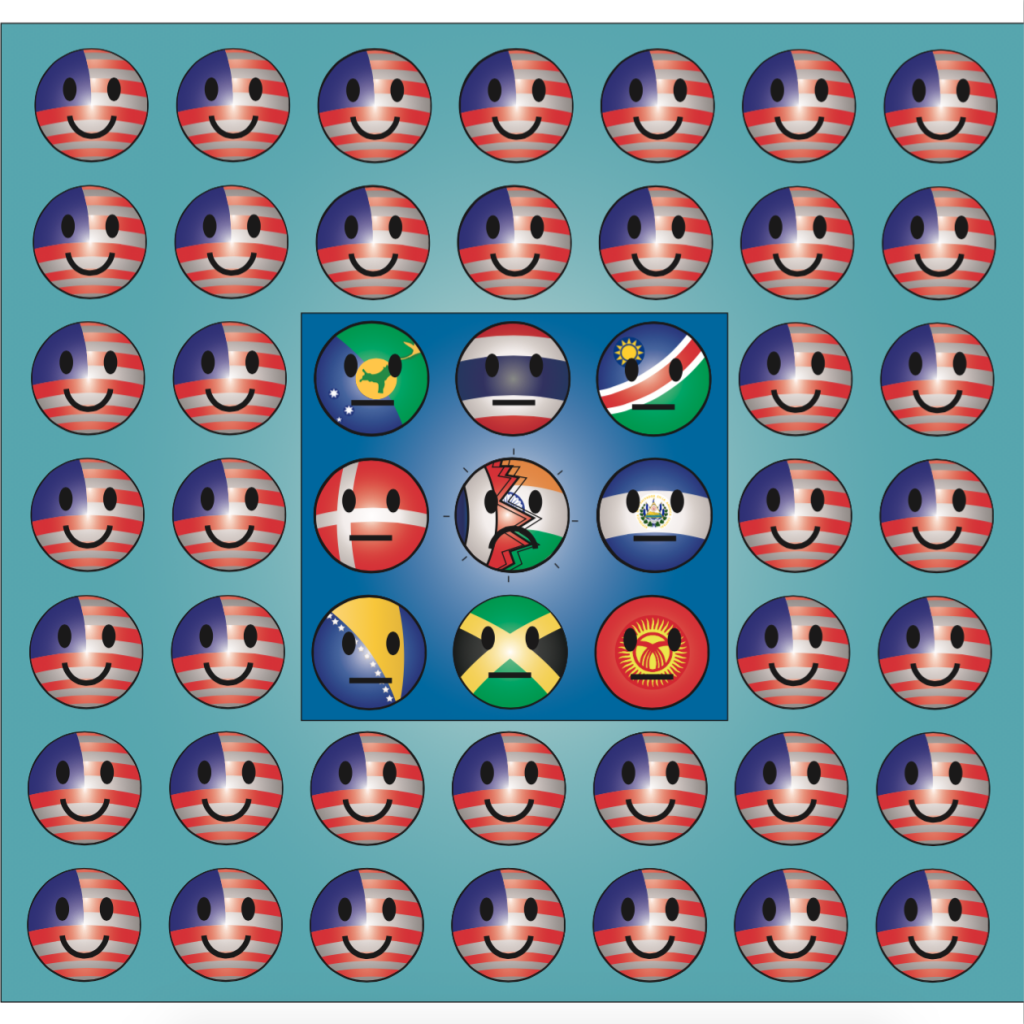 Want to talk more about Third Culture Kids? Come to the next IWB Luncheon!

Lunch, conversation, and people who call home many places at once!  Join us as we explore the experiences of third culture kids.    All are welcome!