IWB / May 2, 2016 / Comments Off on Addressed / Cross-Cultural, Journey Stories, US Culture 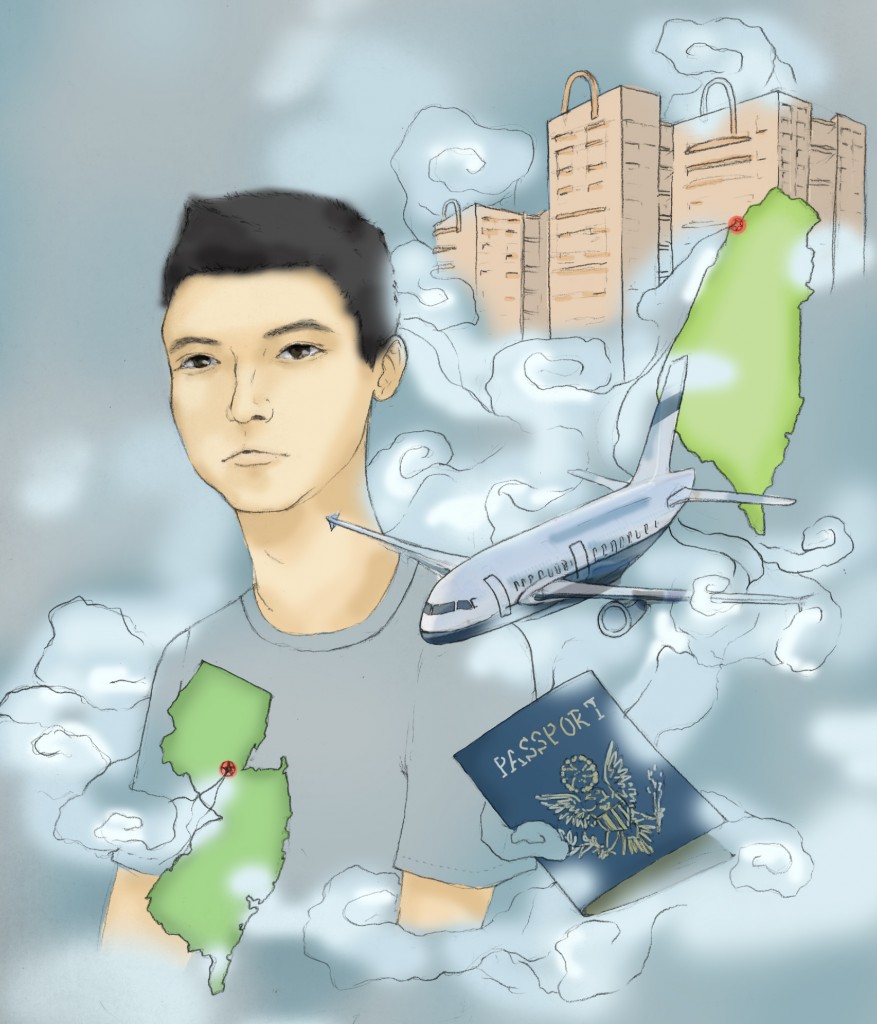 I’ve lied on immigration forms for over half of my life. I must have been ten the first time I flew alone, the first time I had to fill out that little white slip and its blue companion by myself. Why is my ‘permanent address’ the house where I stay at for only a few months a year? I wanted – needed – to ask this question. But who would answer me? Someone could no doubt help me fill out the right answer on the form: a US address for a US citizen. But the quiet boy with the ‘Unaccompanied Minor’ sticker on his chest knew that correct answer already. What I needed was to fill out the ‘why’ field on the immigration form inside my head, and it seemed like nobody could help me with that one. Even the green-uniformed flight attendants, their lives split into days of flight, Taiwan, and America, could at least point to a single place as their origin. Their legitimate permanent address. They could not help me with my real question, behind the logistics. Candy and cards and model airplanes – anything the doting crew could find for the cute kid – did not answer my deeper conundrum: where is home?

My permanent address is located in a suburban town in New Jersey, along the Northeast Corridor commuter rail line to New York. It is the house my dad has lived in since before I was born, the house of my infant years, and the house my mother left. The building has stood for longer than I have, and might still be there when I’m gone. In that sense, it is a permanent address. I’m not so certain it is mine. I go there during school breaks now, as I did in the ten years I spent in Taiwan with my mom, attending a tiny bilingual school in the Silicon Valley of the humid island nation. Some years I spent months in New Jersey, others a few weeks. Neither permanent resident nor guest, I felt at-home yet homesick. I would smile and hug my half-brother in greeting as my mom, who had held back tears saying goodbye less than 24 hours prior, remained fresh in my thoughts. Sometimes she would travel to New Jersey with me, but that wasn’t always better. Once, when my half-brother asked who was in the driveway waiting to pick me up, I hesitated before telling him it was a friend. It was my mother, and at the time I wasn’t sure my half-brother knew she existed. For him, my visits were cues for ecstatic anticipation or silent disappointment, depending on the length and agenda of my stay. At the same time, my company was missed in Taiwan, where my mom would return from work to a dark, empty apartment. I felt more like the passport than the passport-holder sometimes – protected, cherished, cautiously handed off, but not the one who decides the origins and destinations.

I could barely even describe my situation. I’m studying abroad, I would tell immigration agents, and I’m living with my mom. All were facts, technically. But I still bothered my mom about the fine print. Why do I have to put it that way? Am I allowed to live in Taiwan for so long? In airports, my words felt dishonest and the bureaucracy seemed dangerous. The lines on my palm became rivers every time I stood waiting for judgement from another officer, another stern-faced arbiter of my belonging, after landing. Welcome home, they used to say at Newark, before self-service kiosks largely replaced them. Thanks, I would reply without protest. Sorry, immigration agents’ union, but I think I prefer the silent touch screens.

It’s not that I don’t understand the bureaucratic need for a permanent address. The government requires some place of verifiable residence, a location to bundle along with the passport number and two-by-two inch headshot. University box number 5728 is certainly transient; it’s not even reflective of where I live on campus. Yet here’s a thought experiment: what if, say, my dad moved every two years or so? Wouldn’t his two-year abode be half as permanent as mine at Brown, where I will likely be for four? Not to mention that I’m on campus for eight months out of each of those years. And then there’s the fact that I spend approximately half of my off-campus breaks in Taiwan. Stop worrying about it, I can hear friends and family members saying, concerned and more than a little annoyed at my complaints about a bureaucratic reality unlikely to change anytime soon. After all, most Brown students have a permanent address that isn’t where they live during the school year. That’s just the way it is! But how many are confronted with the contradiction regularly? How many are forced to choose between home and not-home, when they’re all really somewhere in between?

When I’m asked for my permanent address these days, my thoughts often wander to unrealistically specific apartment descriptors. One bedroom, one full bath. 2nd floor walk-up. 5 minute walk to N/Q. $1500 per month. They are the products of hours of late-night browsing through rental listings, ‘Walkscore’ maps, and Google Street View panoramas. These quests start off with a general search to satisfy my curiosity about living in a particular city for a potential internship or industry. Before I can stop myself, I’m on Reddit finding out whether I can get authentic Chinese food within walking distance of a single brownstone in Queens I imagine myself inhabiting. It’s 3AM, and I’m only a sophomore. The places I look at are tiny; they’re usually one unit out of multiple within the building. And they’re always rentals, not permanent at all. But they’d count as my address. What a pitiful, unambitious American Dream I have: just a location of residence I can put down on forms without feeling conflicted.

The permanent address means more than that. If – no – when I write, for the first time, with ballpoint pen on top of the seatback table shaking with the turbulence or perhaps my emotions, the street and number and city I have chosen for myself, it will finally represent honesty, coherence, autonomy. It will represent an oral and mental vocabulary that for me will be new and previously foreign: a place where I am traveling from, a place where I will return home.