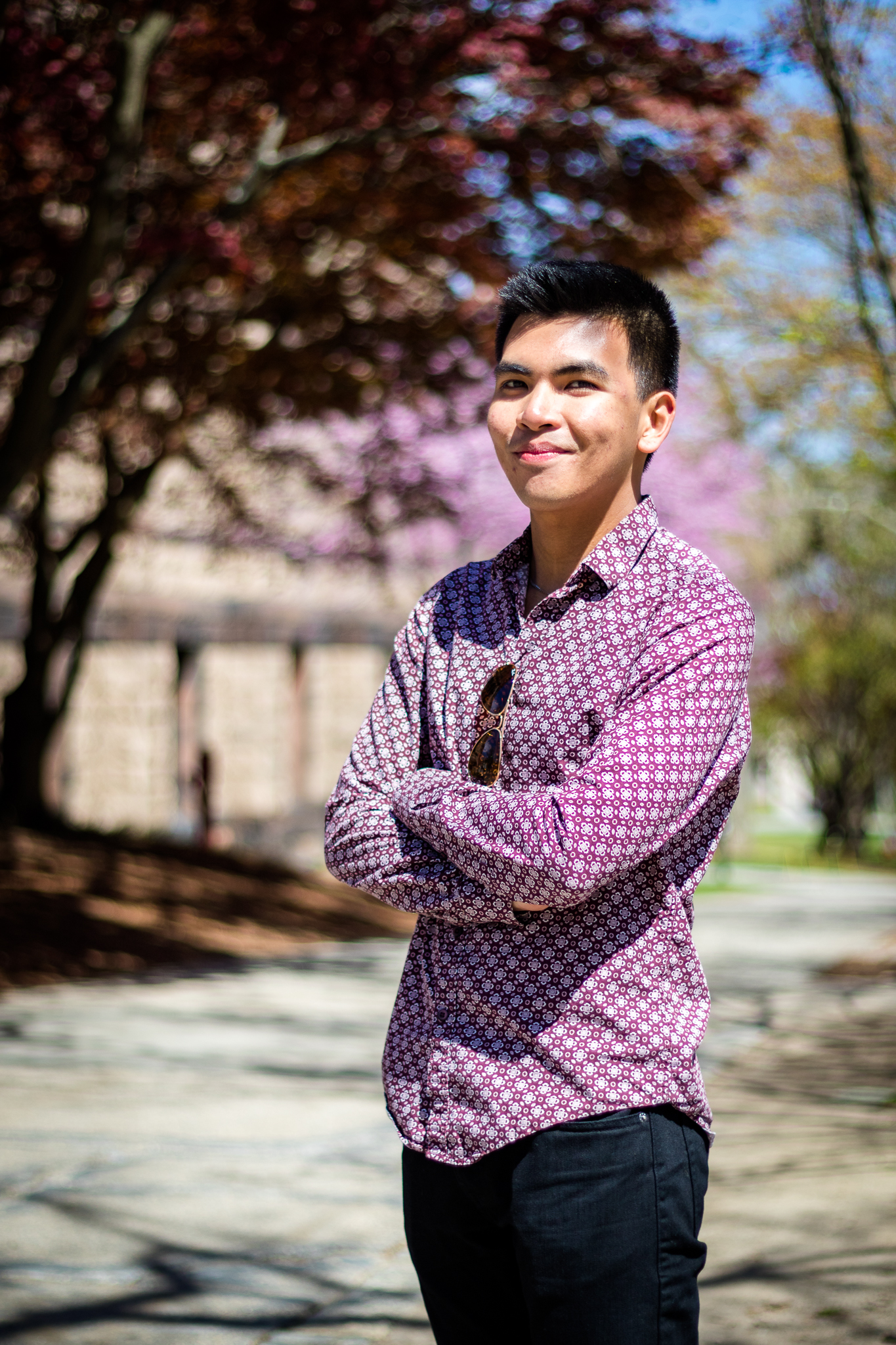 I am from the Philippines.

What is your concentration at Brown?

At Brown I concentrate in International Relations.

I speak four languages; I speak my native tongue, which is Cebuano, or Visayan – it depends on which province you come from – and I speak my national language, which is Filipino, or Tagalog. I speak fluent English and advanced Spanish.

Did you take Spanish here at Brown?

Yes, as my foreign language requirement I chose to do Spanish. And I studied abroad in Barcelona Spring 2015, which was my junior year.

What clubs or extra-curriculars have you been involved with at Brown?

Oh my gosh, that’s quite a lot. I really like trying things that are new to me, and  so I guess my main ones would be: I am an RPL, a Residential Peer Leader, and I have been doing that for three years now; so I was a first-year RPL at Morriss, my sophomore year, a sophomore RPL at New Pembroke my junior year, and I am a CA for juniors and seniors at Slater Hall, which is my dream residence hall; and I am very involved in the Filipino Alliance. I joined it since day one, and I’m so happy to be part of that family; it’s sort of like my home away from home, and I’m so proud of how the club has grown throughout the years. So when I started there wasn’t a lot; my older peers were telling us that the club was almost dying, and so it was so good that we were able to sort of grow it from the ground, and now I’m so happy that it’s flourishing. And there’s a lot more: So there’s the Queer Alliance, there’s the Toastmasters, there’s the Brown Student Language Exchange, and so much more.

I decided to study in the US because I went to a United World College in Hong Kong, and if you went to that school system, you would be guaranteed a scholarship to go to college in the US, which is, thankfully, by the Davis United World Scholars program, so it was the next logical step. And you know, growing up, my mom was the avid American dreamer. So at a very young age she told me to learn English very well; she let me watch a lot of American shows and movies, and she would always recount stories about the movies and the articles that she had read about how America is where dreams are going to come true, and if you only work hard, and  manage to get there, all of your dreams will come true. As a young kid, I internalized all of that, because my mom is a housewife, so I had to listen through this every single day, and that gets to you, and when I went to Hong Kong it was an amazing time of my life. I got to study with people from all over the world, and why not take it a step further and go to college in the United States?

How was the decision to attend UWC made?

So UWC was my decision. I came from my hometown, Davao in the Philippines, which is down south, and we didn’t really get to move a lot. My father was an overseas Filipino worker; he was away ten months a year, and my mom was a housewife. And so we didn’t have a lot of financial resources to travel. And I’d been in the same school from kindergarten to tenth grade. But I’ve always yearned for something that is outside, to explore the world  that’s bigger than my world. It’s a funny story because one of my “competitors” back in my high school in the Philippines  was telling me that would never get the top spot in my school because I was always  too outgoing, I never studied too hard. And then my “competition,” who was also very good, told him to not underestimate me. He told that person to never underestimate me because one day I might be studying abroad, or whatnot! And that was like, oh, that’s a pretty good idea, so I checked the newspapers and online articles, and I saw this article saying that “United World College is looking for Filipino scholars.” And it just sounded like the dream opportunity for me. So I applied, never expecting that I would get it, and that year I was one of the two sent by the Philippines to the United World College.

I think that my expectations were definitely surpassed. I think that choosing Brown especially has made my experience so much more wonderful, because I feel like this university is such a good culture fit for me. I think if I went somewhere else, it would have been totally different. Here I was able to really take advantage of the liberal arts education and the open curriculum;  I studied IR, which is crazy, because growing up, I always knew deep inside that I was going to major in something unconventional or obscure. And just knowing that here at Brown I was able to study IR, which is very unconventional compared to the Filipino population. Who studies IR, right? And so here I was able to pursue that interest, and just explore different types of areas of knowledge, and I guess pursue my passion, and at the same time grow as a mature human being. It’s one of the things that I’m really grateful for, because I have the confidence deep inside me that wherever life is going to throw me I’m going to be able to handle it. Because not only did I go through a rigorous academic program, but I gained life skills.

What did you find most difficult to get used to in the US?

The most difficult part for me was definitely the academic side of things. Brown is definitely intense, compared to  the stereotypes that go around, Brown as the chill-est Ivy League. I definitely would say that it’s one of the happiest places in the world and we have a great balance here. But that is not to say that the academics are not rigorous. I definitely had to go through the steep learning curve; I didn’t ease my way down here. That’s why I’m so happy to be graduating! Because I know that all those semesters at Brown were well-fought. You know, it was a battle because I had to work hard a lot and encounter disappointments with regards to grades, but I grew.

What did you find easiest to get used to in the US?

The easiest to get through was the social part. I definitely felt that Brown was open to a lot of types of people. I didn’t have to be someone else to fit into Brown. I felt like the moment I entered the campus, I came here, was the person I am, and I felt like I didn’t have to pretend like I was someone else just to gain friends. And I definitely value that, because I come into the classroom being me, and I’m respected by my classmates and my professors. I come into the room in a club meeting, being me, and I’m respected for my ideas and I’m respected as a student leader. And in every space I enter here at Brown, I don’t have to pretend like I’m someone else to be respected and to be valued.

What is the food or dish from home that you miss the most?

Oh my god. (laughs) So I miss a lot of Filipino food a lot. One thing that I totally, totally miss is the unripe mango. So we eat it, it’s a very common snack back home where green mangoes are eaten with salt and vinegar. [Interviewer: So it’s a salty dish?] It’s sour and salty; it’s not a dish, it’s a snack. And, I don’t know, it cost me a lot of urinary tract infections, but I love it, and there’s just no way for me to find it here. [. . . ] So that’s definitely something I crave every single day, and I’m looking forward to having it this summer.

What is an Americanism that you have picked up in the last four years?

Definitely speaking up for myself, to really be an advocate for your values, and asking for what you want. I think in the Philippines, from the culture that I’m used to, you sort of imply, and you go around the bush, in asking for what you want, but here in America I really learned that if you don’t ask for something, then you won’t – you will never get it. And it’s better to get an answer that is “No” than to just waste a lot of time hoping that someone would give you what you need. So I’m definitely more adamant about my needs and really stating what I believe in, as opposed to just hoping that at some point my point will get across.

So definitely at home, at the times that I’ve gone home, I definitely was more “aggressive” in the eyes of my peers back home, but I definitely think that I am more assertive now. Aggressive is different from assertive. I definitely feel that I’m more aware of my values and my rights as an individual, because here they value the individual a lot. And so, yeah, I’m definitely more comfortable being alone, here, and being alone in general, because  in the Philippines, sometimes you compromise on a lot of things. You compromise on achieving your goals because you have to think about other people. But one of the things I’ve learned in the US is that you really have to stand up for yourself. If that means you’re going to have to do it alone, then so be it. And definitely that’s one of the things that I brought back home and a lot of my peers have found weird because I would, if I wanted to do this, I would do on it, whether you’re with me or not. And that’s quite unusual for my friends back home. 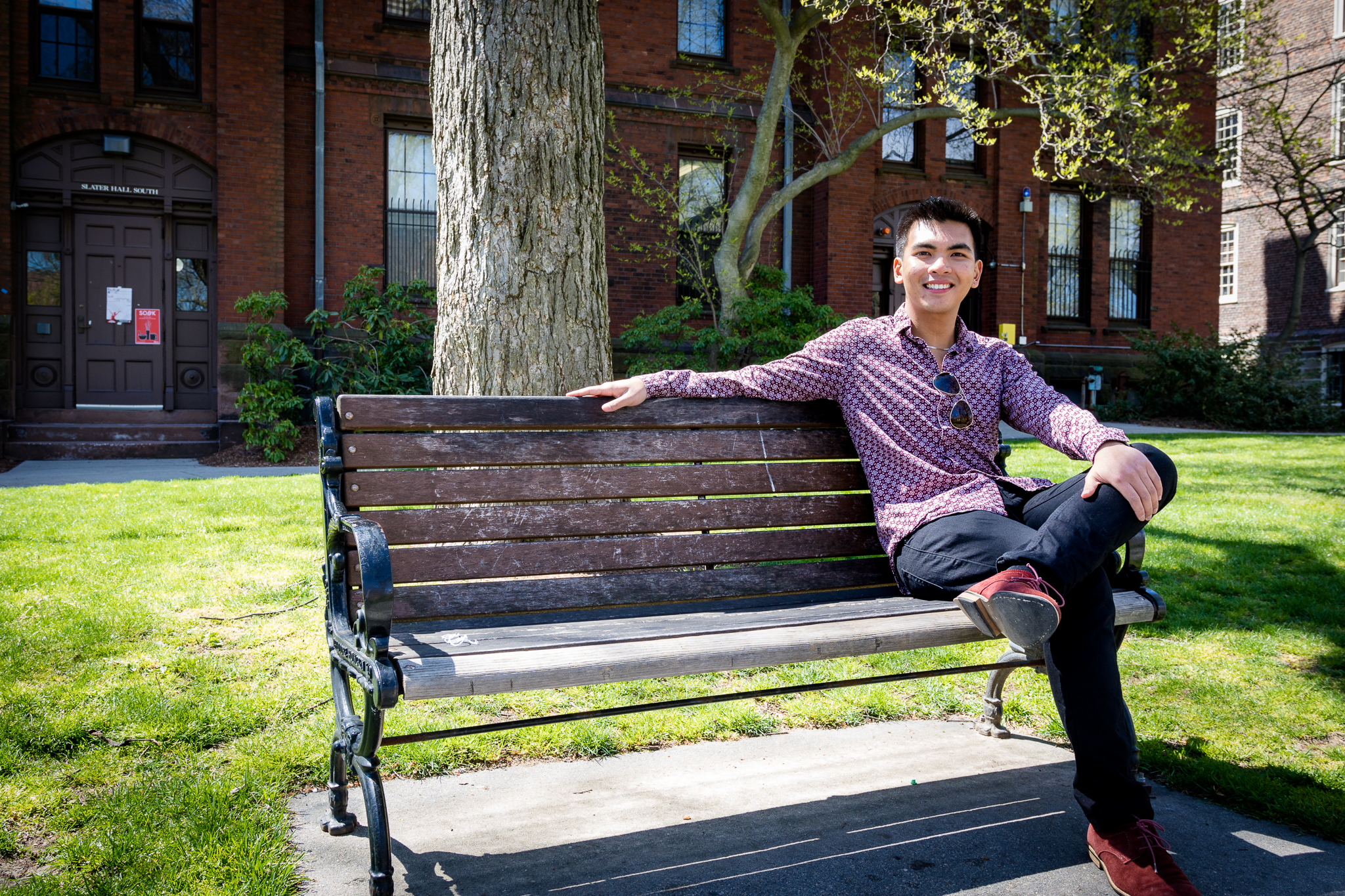 What advice would you give to an incoming international student?

One piece of advice that I hope that an incoming international freshman would take advantage of is to really reach out to a lot of people, whether it’s the different offices at Brown, or to the different peers that you have, the different upperclassmen, to really put yourself out there. Because I don’t know which culture you’re going to come from, but here in the US, it’s really important for you to ask, like I said earlier. So go out there, go to a lot of events, talk to a lot of people, ask, ask, ask. Because if you don’t ask, you won’t get it.

What is your favorite Halloween costume that you’ve worn in the last four years?

Oh, gosh. I think my favorite one was when I pretended that I was a vampire, because I got to wear something warm on me, because October was crazy cold for me. So I liked the excuse that I had to wear a cape and wear warm clothing but still participate in the festivities. [Interviewer: when was that?] That was my first year!

Tags: ihob, senior
← Grief Away from Home
A Journey from Preconceptions to President →