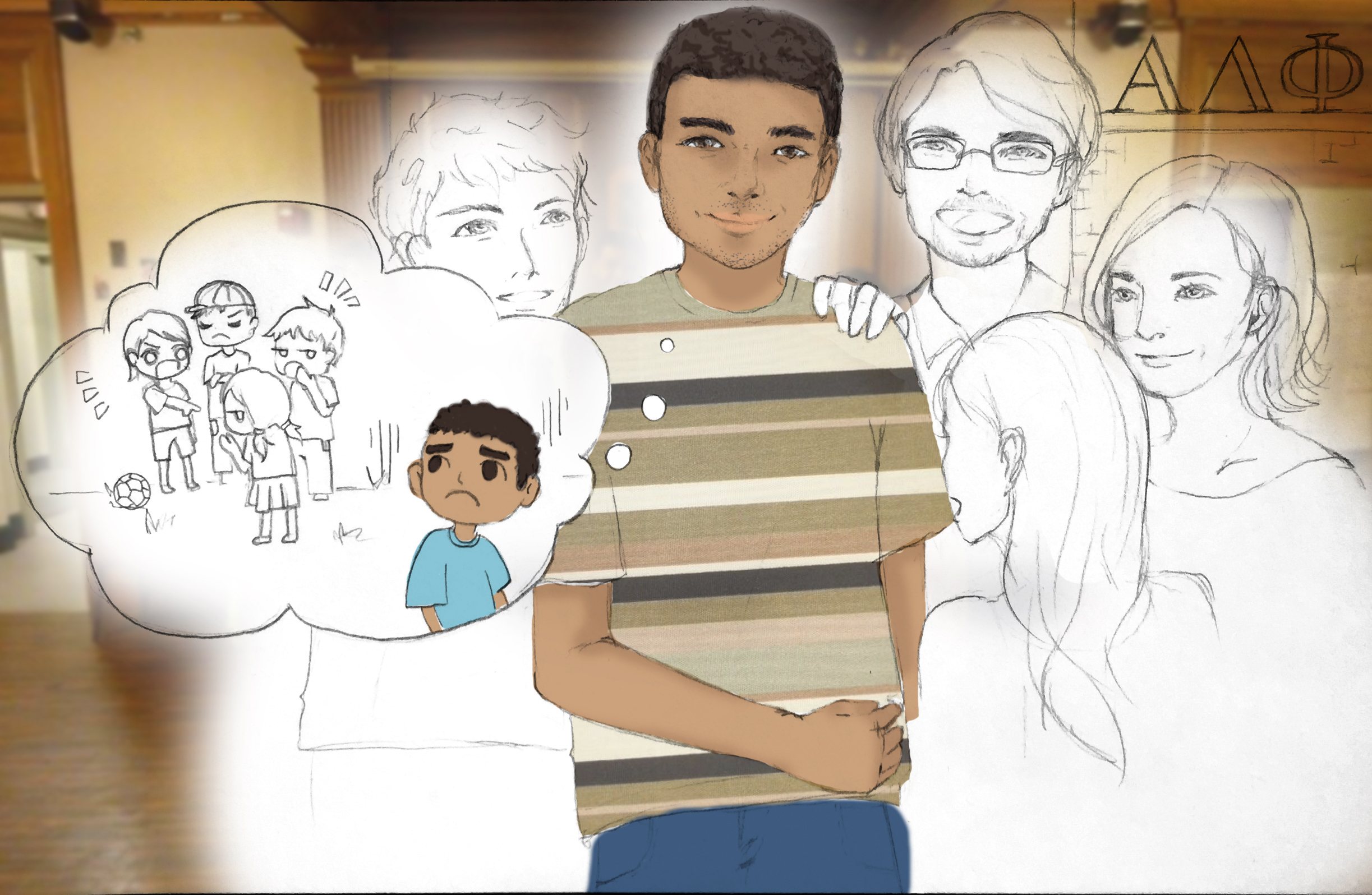 Putting the Halves Together

IWB / May 22, 2016 / Comments Off on Putting the Halves Together / Cross-Cultural, Journey Stories, US Culture

Some Context to Myself

Life began for me in Ashland, Kentucky, a small town located in the heart of Appalachian America. I was born to parents of two different races—a white mother and a black father.  I didn’t know my biological father for the majority of my life, although I eventually did meet him during my freshman year of college. Instead, my earliest memories involve my stepfather, who I’ve considered to be my dad my entire life.

Although I was born in Kentucky, I moved to Ohio when I was a few months old. Soon after my second birthday, my mother and I moved in with my stepfather in West Portsmouth.  For those who don’t know, West Portsmouth is a small town in Southern Ohio that straddles the Kentucky border. West Portsmouth, and the entire region, is predominately white.  It also happens to be true that my entire family, and nearly everyone I interacted with up until college, is also white.  In fact, I had no idea of the concept of race during the early years of my life, when I began elementary school. To me, everybody seemed the same, and a person’s skin tone made no difference whatsoever.

The way race is viewed in America slapped me in the face, however, once I entered school.  When I first arrived at Portsmouth West Elementary School, the children treated me differently. I vividly remember some of my fellow students looking stunned when I entered the classroom on our first day of kindergarten. Being four years old, I was clueless as to the reason.  It didn’t take long to figure out, though. A few weeks into the school year, I asked a group of my classmates if I could play a game with them on the rainbow rug.  Their response shocked me, but it wouldn’t be the last time I heard a comment like that.

“No, you can’t play with us because you’re black.”

Such a simple phrase, but one with long-lasting effects. After being told that, I left the room and cried for a little while. It made me feel very confused and scared. I didn’t know what was wrong with me.  Ever since hearing that phrase, I suddenly felt that I was “other” compared to my peers, that I was something undesired. Because I was the only black student in my class for most of my school career, it was easy for others to single me out or harass me given my darker skin tone and African facial features.  This kind of othering continued for a long period of time, leading to the development of an inferiority complex that haunted me for an extended period of my life. Simply put, I was duped into believing that I was inherently lesser than others, based on such a trivial feature of myself. Naturally, this created a very reclusive and shy self.  My mom always laughs that I was such a social and outgoing toddler.  I also consider myself a fairly extroverted person now. But for the majority of my time in grade school, I was practically the opposite.

It was always difficult for me to connect with others when it came to being harassed about my racial identity.  After all, no one that I knew had gone through anything similar.  I felt very alone for the longest time, and I even went through phases denying my blackness during the course of growing up. By doing this, I prayed it would lessen the aggressions against me that had been occurring.  This is completely shameful to me looking back, but it would be unfair of me to not tell my honest story.  If someone were to ask me “what” I was, which came up often (I do look racially ambiguous), I was insistent on being white with a deep tan.  I was practically brainwashed to believe that whiteness was better, while anything else was lesser. This was reinforced by nearly everyone I knew, including my own family, unfortunately.

I’d like to preface what I’m about to write by saying that my family is great, and they have only had the best intentions for me.  Like everyone else, though, they are human and make mistakes.  Often, my family would try to reassure me that I was not lesser, but their methods to do so sometimes caused more pain than alleviation.  By saying things like “don’t worry, your skin is pretty light,” and “you don’t even look black,” subliminal messages were sent to me confirming my fears and insecurities.

Thankfully, when high school came around I began to develop more confidence in myself, mainly due to performing in theater. The most influential person involved in developing my confidence was my choir director, theater director, and friend Linda Tieman. Throughout my time in high school, she continually supported me and helped reduce my sensitivity to harassment. In short, Linda helped me reverse years of being brainwashed.  While I entered the thespian program being a nervous face in the crowd, still terrified of others’ judgments of me, I left feeling like an empowered human.  Even though I still received some race-related comments and aggressions in high school, they didn’t, and still don’t, faze me nearly as much.

Though much more confident about my quality as a human being, I was still confused about how I viewed myself racially.  It was still hard to consider myself a person of color. After all, my entire family and friend group was white, and I didn’t necessarily see myself differently from them.  In my mind, I was still a whirlwind of ambiguity. Once I entered college, however, my mindset quickly changed.  Suddenly, I found myself leaving the extremely homogenous Appalachia for the diverse environment of Brown University. I also recognized that in most cases, students at Brown don’t link a person’s personal value to their skin.  This was a huge relief to me, and it felt liberating in a sense. Suddenly, I was in a liberal area free of judgment for my genetic code. As time went on, I found myself more and more comfortable with my own identity as a person of color.  I still wasn’t fully rid of my sense of isolation, though.

While I was no longer alone in being a person of color, I still felt very alone when it came to my background.  Many of my fellow students of color had grown up with other people of color, and many more shared similar backgrounds and experiences in life. Largely, these weren’t experiences that I had.  As a result, it was still hard for me to relate to anyone when it came to racial matters.  Thankfully, I came across the Brown Organization of Multiracial and Biracial Students (BOMBS) my freshman year.  While I haven’t been as active as I’d like to be recently, the group did wonders in helping me finally relate to others racially.  Being part of it meant that I suddenly had people with whom I shared similar experiences. At long last, I nearly felt fully comfortable with my race.  But there was still one final step I had to take before I could approach a sense of closure in my personal battle.

Sometime during my first year at Brown, I received a phone call.

That phone call came from my biological father.

At first, I had no idea what to do. I was in a slight panic. It had been nineteen years since we had had any interaction, so how could anybody know what the right option was?  I knew deep down, though, that I needed to accept the call, no matter the outcome.  It was the right thing to do, simply put.  Upon answering the phone, an air of awkwardness hit me. I had no idea what to expect, and I’m fairly sure he didn’t either.  We were both equally nervous.  After a few minutes of warming up, though, we ended up having a nice conversation, and I learned quite a bit about the black side of my family.  Our conversations kept up regularly and culminated with my visit to his home during the spring break of my freshman year.

Naturally, the nervousness that I exuded during our first phone calls was magnified when I went to visit him.  As I sat on the plane to Detroit, I had regrets and anxiety filling my mind.  I thought that I had perhaps made the wrong choice in coming, and I contemplated just going back to my safety bubble in Ohio.   Deep down inside, though, I knew that just like answering the phone call, visiting was the right thing to do.  The plane touched down, and my journey began.

Exiting the plane and proceeding to the baggage claim area, I was greeted by my biological father, smiling, and I smiled back.  My nervousness washed away fairly quickly, and I ended up having a great time with him and the newfound half of my family. Building bonds with them was fantastic, and it helped me understand myself better than I ever had before.  While there were certainly some awkward moments during the trip, it was amazing getting to absorb so much familial history during the week I was there. As much as I wish there had been a cliche, cathartic moment I could talk about, it was mainly quiet. No emotional scene, the kind you’d see in a movie, occurred while visiting Detroit, yet I left as a changed person. There were no large fireworks during the trip, but ever since, I’ve had a steady burning candle lit within.  After the week passed, I gave my farewells to my biological father and travelled back to Ohio.  I spent the rest of my spring break in West Portsmouth, where I met my family and friends, who were all overjoyed to see me. I was overjoyed to see them, too. For the first time, I had a complete sense of self.

← A Journey from Preconceptions to President
Culture, Identity, and Connections →