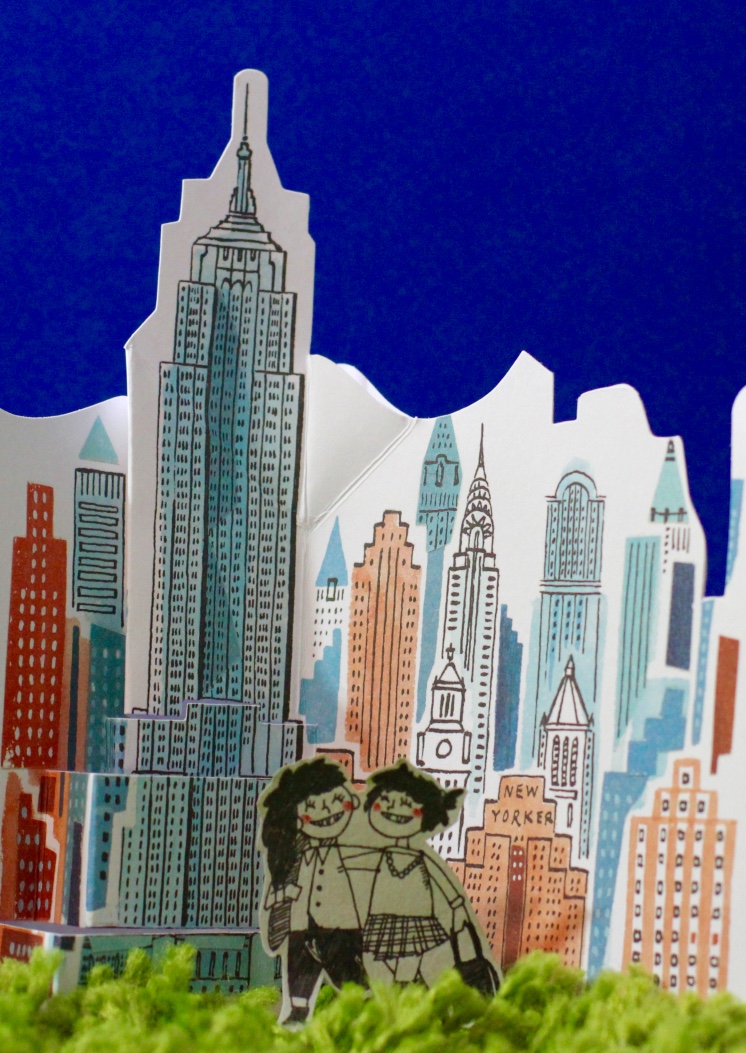 Maria and I arrive in New York City on a Peter Pan bus with Neverland thoughts and Darling dreams.

We then realize we have to drag sixty-plus pounds of luggage between the two of us, across nine blocks in a foreign city.

“Let’s walk,” I suggest, mostly kidding, but soon we find that there is no taxi big enough willing to take us—anywhere.

“JFK?” the drivers just ask—probably because the airport strikes them as the only viable destination, but also because this seems to have been established by some secret New Yorker system as the only place bigger cabs can go.

Maria shakes her head at them. I place my green and flowered handbag, a Claude Monet, on top of my suitcase and wrap its strap over the handle several times. In my left hand I take my second suitcase and find that pushing, rather than pulling, is more bearable.

Maria carries a guitar and an iMac she’s hoping to sell after owning for five months. Who would’ve thought that having a massive desktop computer would be impractical for college?

“Can we stop?” she asks intermittently.

Colorful figures pass us by, each blending into the next. I avoid making eye contact with anyone, embarrassed to be carrying half my own weight.

I have visions of myself, sometimes, clearing out my dorm room. I’m taking every object I have no use for and putting it into a cardboard box. I’m donating all the clutter in my life—because maybe somebody else can make use of it—and I’m being thoughtful of the things I own and of all of the space I take up in the world.

But the vision adds itself to the list of things I’ll supposedly get to whenever I have the time. So instead I watch YouTube videos of people who pride themselves on the ability to live light.

“Living light” is a thing, and the most ambitious of its followers own less than forty items. There are others with skills I perhaps covet even more—people so practical in their travel habits they are able to travel with the bare minimum, still managing to be comfortable.

These people make moms all over the world look messy. 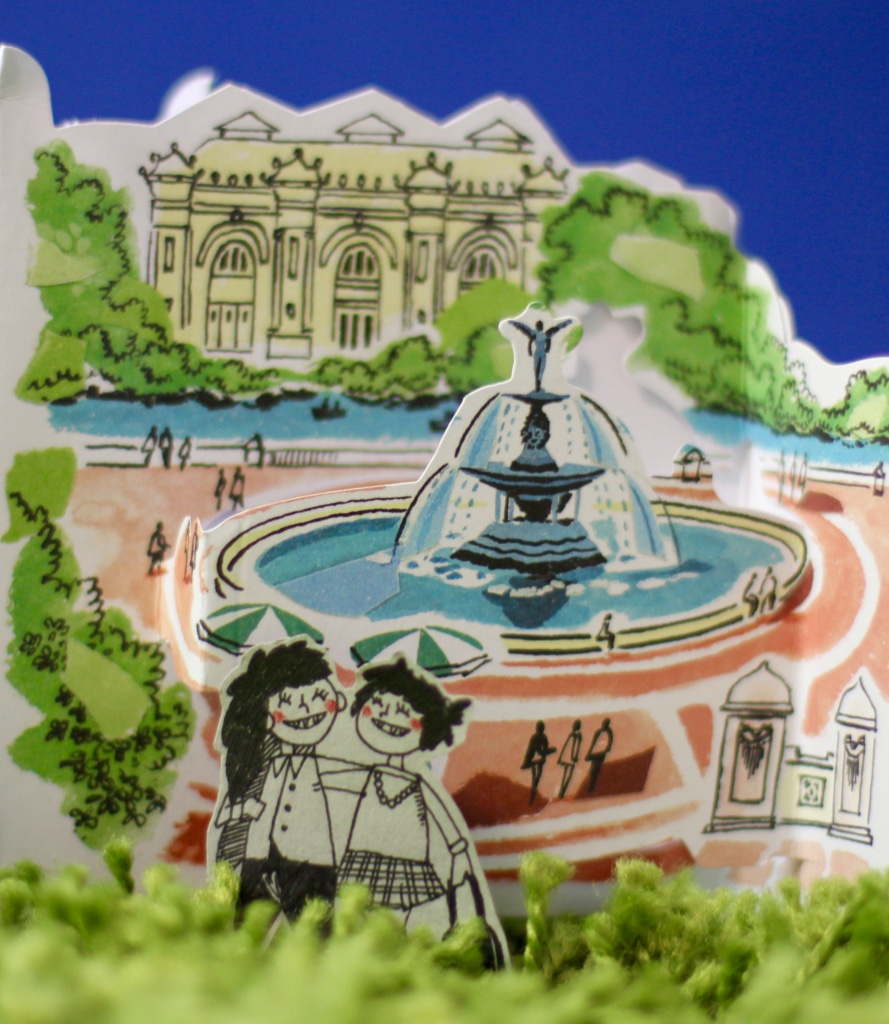 Maria and I have grown up traveling the world—we are nomads and have likely taken over three hundred flights, maybe more, or… well, how much is too many? There’s no greater trust than to board an over-sized carton and let a stranger steer it through the sky, through the night and day, time zones and storm clouds and memories left behind, and turbulence that makes the water in your dinner glass spill all over the puny pullout table.  How many flights do you have to take before you memorize the safety instructions? Before you realize how much downsizing there’s been? Before you fight back against your working mother, and tell her, “No, I will not move again”?

Many times and patience and adaptation and forced acceptance, until it’s become something you’re grateful for and shaped by inextricably, until you can imagine no other alternative but that suspension between two wide triangles that jut out into space, and the only balance you come to learn is that of staying, somehow, as if by magic, between the distant atmospheric boundary and the new land that you must learn to walk.

Until you start to believe that if for some ridiculous reason traveling were to run through family bloodlines, you would pass on genes that in your descendants would eventually create able-bodied, bird-human hybrids.

“We’re never going to learn how to travel,” Maria says. We stand at a stoplight. The driver of a passing car sticks his head out the window and yells something unintelligible.

I remember the time when we drove from Brasília to Búzios for a total of eighteen hours and could barely move in the backseat. For what felt like ages I had to twist my arm around to hold Maria’s guitar steady as I watched Across the Universe on her laptop, trying to distract myself. We had sandwiches for lunch and they were hot and smarmy in the middle of everything, loaves pressed together, soggy. Then, of course, Murphy’s Law: the back door of the car swung open and all of our belongings tumbled across some highway in the Brazilian outback.

There were moments of bribery, charm, and negotiation, whenever our items exceeded the weight limit at check in. 75% of the time we had to leave random objects with airport workers, flashing our suitcases open, throwing a pair of shoes or an old sweater out, here, there, hardly avoiding knocking fellow travelers in the face. Not to mention the time I packed seventeen paperbacks and claimed I’d been selective with my reading. Or, my biggest achievement: traveling with literally no documentation, because Mom and her silvery tongue somehow got my sixteen-year-old self on board.

There’s a reason why, in our household, any kind of travel must be prepared for weeks in advance. Packing only a couple of days ahead is practically unheard of—to my father, a sin—because we should know by now that travel requires better from us.

Of every bizarre little consequence surrounding travel, my father’s rage has always won out. This rage characteristically expresses itself through a voice that crescendos, and an exaggerated Italian hand gesture. This doesn’t mean my father is an angry man; in fact, I’d describe him as nothing short of deeply loving.

It’s really just the traveling thing that gets to him. 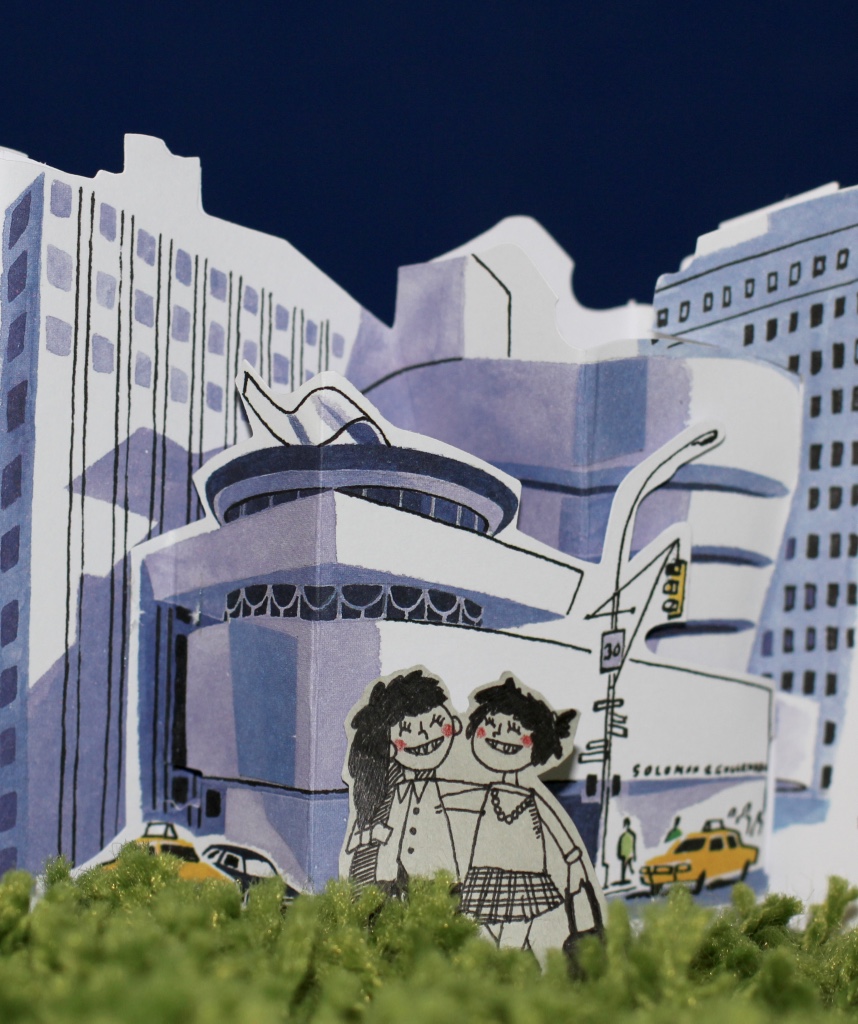 As Maria and I drag half of our life’s worth through the Loudest City I Have Ever Known, it’s an early summer day. Already I can sense the sweat patches beginning to collect beneath my denim jacket. I stop and wait for Maria. Outwardly I’m frustrated and impatient, urging her on. On the inside I’m thankful for the extra moment to breathe.

The flap to Maria’s iMac box continues to slip—green duct tape has been strewn across the top of it, tacked on last-minute when moving out from the filthy frat house ResLife put us in for Senior week. I continue to eye the tape, now, willing it to stick, as I try to balance the bag on my shoulder, the suitcase I’m dragging behind me, my jacket that threatens to slip off one shoulder. More urgent still are my own footsteps pushing me forth, the fear of this city that all of a sudden grips me. It’s too big and too real; I miss the cotton swabs that covered the floor of the dorm room when I opened the door in disgust, the tricky lock in the door that I had to remember to press on the way out. I miss even the hair shavings in the sink of a gender-neutral bathroom. And I miss the quote downstairs carved into the door of the library, because of course at Brown the frat I was assigned to was literary.

How were we there just this morning, how are we here now in another world?

“Help,” Maria calls. I turn to find her struggling to move her suitcase while carrying the guitar on her back. She needs help but I continue to look, just watching. I am virtually useless. The iMac’s been left on the sidewalk, its big white box much too conspicuous. I stare at it and think, if someone were to make a grab for it now—if someone were to pick that computer up by the strap and continue walking I could and would do nothing, absolutely nothing.

“Maria,” I say, upbraiding her, but my voice is lost to the crowd, drowned out by the waves of honks, yells of mechanical blares.

“Why do we always bring so much crap with us everywhere,” Maria says.

All I can think is that this agonizingly slow walk over nine blocks of a foreign city will somehow be worth it. That there’s a place for us in the city, that there are people to see and new experiences in wait and that we will not be swallowed up by New York.

The city is sometimes referred to as the international capital of the world and we are two lost college students with starry eyes and feet that run on naiveté. We’re here because I’ve dragged my sister along with me to pursue a dream I’ve envisioned for myself for years—to attend BookExpo America, the largest annual book convention in the world.

I go to the conference. I pick up what is probably an unhealthy amount of free books that I will later have to pack in my suitcase and that I will later have to partially leave behind. I meet Emma Donoghue and David Levithan and Mindy Kaling, television sensation/female role model/hilarious all around human being. I write a letter to Mindy and gush about how big of a fan I am, and then of course in the fifteen-second frame in which I’m able to speak with her I start stuttering and take a selfie that neither of us is in.

Over the course of three days, I walk thirty minutes to the Javitz Center for the conference, there and back, all by myself in this big city because after the first day Maria is sick of it and I don’t blame her.

Along the way I pass a couple of Brazilian barbecue restaurants. I linger if only to hear the faint accent in the waiters’ English, and one day I discover a street sign marked “Little Brazil.”

When I think back on my time in New York City, I am filled with wonder at the great adventure that it was. It’s easy to write about it now, to portray the anxiety that energized me on that hot summer’s day. It’s easy to relay the fact that I had seven banana nut oatmeal portions for breakfast during my time there, and that I used a glass shelf underneath a table in the living room of a friend’s apartment as my makeshift closet. That I went to the bookstore and bought Adulting: How to Become a Grown-Up in 46 Easy(ish) Steps and understood how likely it was that from then on, things were only going to get tougher. Later, when we walk to Central Park, I am left in awe by the contrasts of the city. “How can a place like this exist in New York?” I ask Maria.

I try to encapsulate the park in memory. I decide then that, if ever I live in New York City, I will come to Central Park every day. The quiet, its peacefulness, is otherworldly.

The idea of a park within the city enchants me for many reasons, one being its inherent contrast. My life so far, in all of its foreign destinations, has been marked by contrast. My family, for example, will never learn to travel. Yet, we have—for decades. We’ve built our lives upon it. We will argue and we will bicker and we will drop our things here, there, wherever we go—but we will also hope to leave a few good things behind.

The following day we take a plane out to Europe. We have a ton of crap with us, of course, but with New York miles behind us, in some ways we feel less weight on our shoulders.

As we’re packing for the flight, Maria eyes my suitcase with amusement. “How many books are you bringing home?”

I smile at her.

← Sofrito
Some Thoughts about Marriages in China →