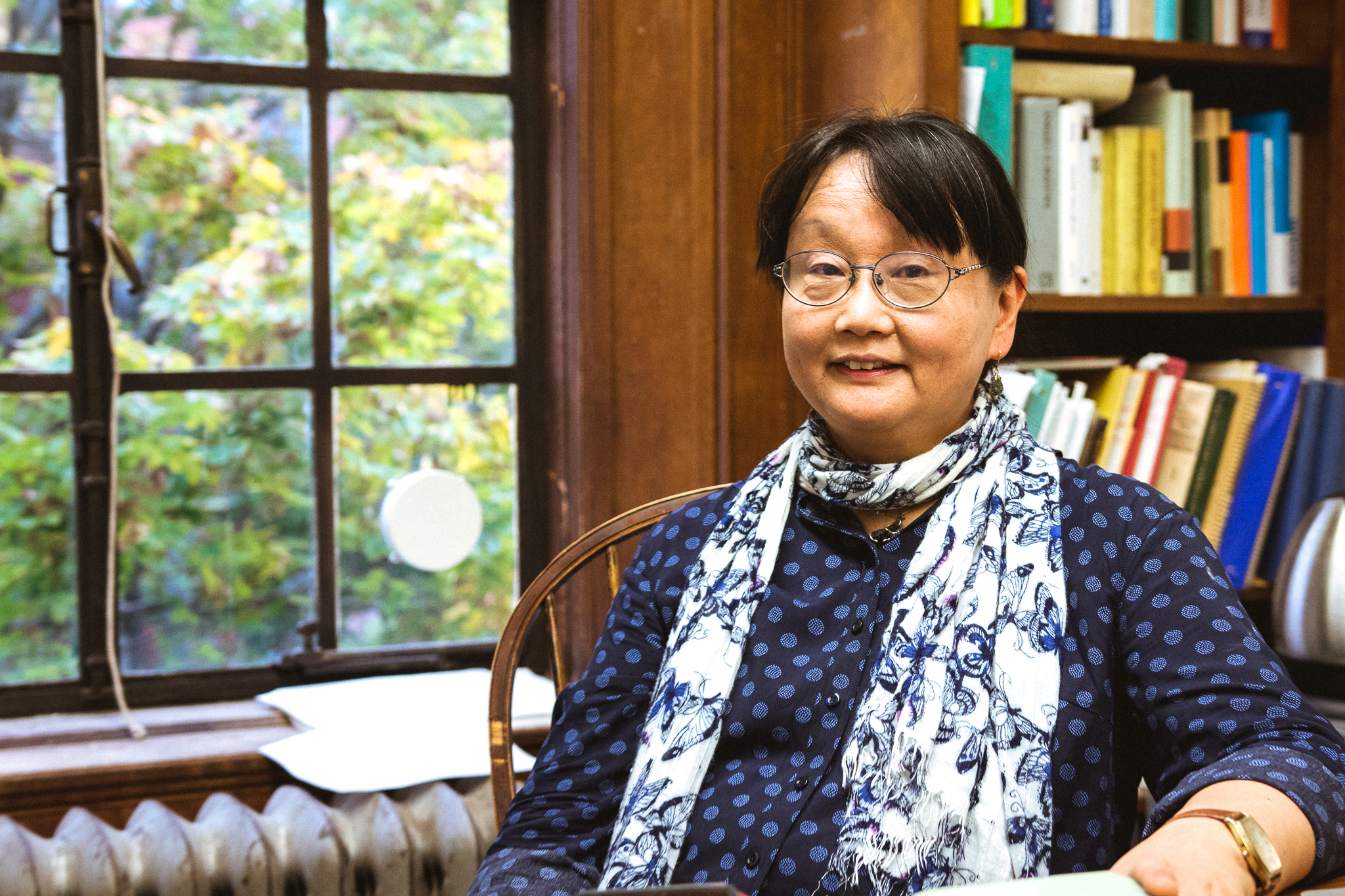 Masako Fidler, a linguist specializing in Slavic languages, teaches Czech language and culture courses at Brown. Born and mostly raised in Japan, she studied Russian literature in college and came to Brown after her graduate studies. Below is an in-depth interview with Professor Fidler, an exceptional yet humble individual with a unique and fascinating life story.

How did you end up teaching at Brown?

I came here to replace Professor Henry Kučera, who was a great linguist. When he retired, I came in, and there was a large hole, a large hole that I haven’t filled. I came here in 1990, I think, a long time ago.

Where were you before you came to Brown?

It was very weird; I applied from Japan. I was finishing my dissertation in Japan, and was applying for positions. I must say that Brown was very unique; for some reason they wanted to look at me. I had not been in Czechoslovakia before that. When I came to Brown, I was told that since Professor Kučera was teaching some Czech in his course on the comparative analysis of Czech and Russian, I would be expected to teach at least first-year Czech, along with Russian. My dissertation topic was completely on Russian. So I really had to tell myself that I had to be positive, which really helped me. I didn’t say, “I can’t do this.” I said, you know, “I’ll give it a try.”

How fluent were you in Czech before you took the position?

When I came, I was really not [fluent]. I had Czech, but it was research knowledge, reading knowledge of Czech. So I wasn’t even able to—I didn’t know how to buy a sausage on the street. When I arrived here, while I was teaching and doing research, I had to go back and forth between the United States and Czechoslovakia, and later on, the Czech Republic. Of course, I have [Czech-speaking] friends, and half of my family is Czech–my husband is Czech–and we speak Czech at home, so that also helps. But I was also fortunate that I had really, really good friends, because you can’t really deny that there are issues when a person looks different.

Have you experienced surprise in others about your specialization in Slavic languages?

At UCLA most professors were very nice to me, and they helped me, but the implicit text was that I would go back to Japan, right? Except for my dissertation advisor; his name is Alan Timberlake. He didn’t care! I would be complaining to him, “I’m Japanese, I’m from Japan, I don’t know if I should be continuing,” because originally I thought I would get my master’s then go back. And he said, “Well, why not! What’s the problem? You do what you want to do! You love what you do, right?” I wouldn’t have continued without him, really.

Were you born in Japan? When did you come to the US?

I was born in Japan. When I was a child, from 4-6, I was in Austin, Texas. Both of my parents were working towards their PhD. To this day, I can’t imagine how they did it: they were working as teaching assistants, taking courses, doing summer studies, and writing their dissertations. And they finished [within two years]–both of them. I went to a kindergarten and maybe two months of first grade, and then we went back. I did the rest of K-12 [in Japan]. And I did my bachelor’s and studied Russian literature. Oh, and during my college years, I was in Northfield, MN for one year, at Carleton College.

How were the multiple instances of going to the U.S. and back?

I didn’t realize how Japanese I was! Until very recently. I thought I was swimming in a different world; of course, when I went back as a child and as a student, I had strong culture shocks in Japan. But after a while it dissipated. I thought I was different, but I didn’t realize that I wasn’t totally Westernized. When I came to the United States to work and live in the real world, I started realizing that, “OK, my behavioral patterns and the way I actually say things, a lot of things, are actually very Japanese.”

Speaking of home culture, would you consider Japan home, or has that changed?

That’s a good question. Home: My home doesn’t exist too much anymore–you know, maybe a bit, because my mother is still alive and doing well–but the house that I used to live in is totally gone, and the surroundings are different, and the young people are different. In other words, where is my home? You know, it’s actually my memory. So my home is not really there, physically. I have to say that I’ve been living in Rhode Island for maybe longer than I did in Japan already, so I’m starting to feel that maybe I’m at home here. We have friends, and we remember too much, so I think we’re home here. 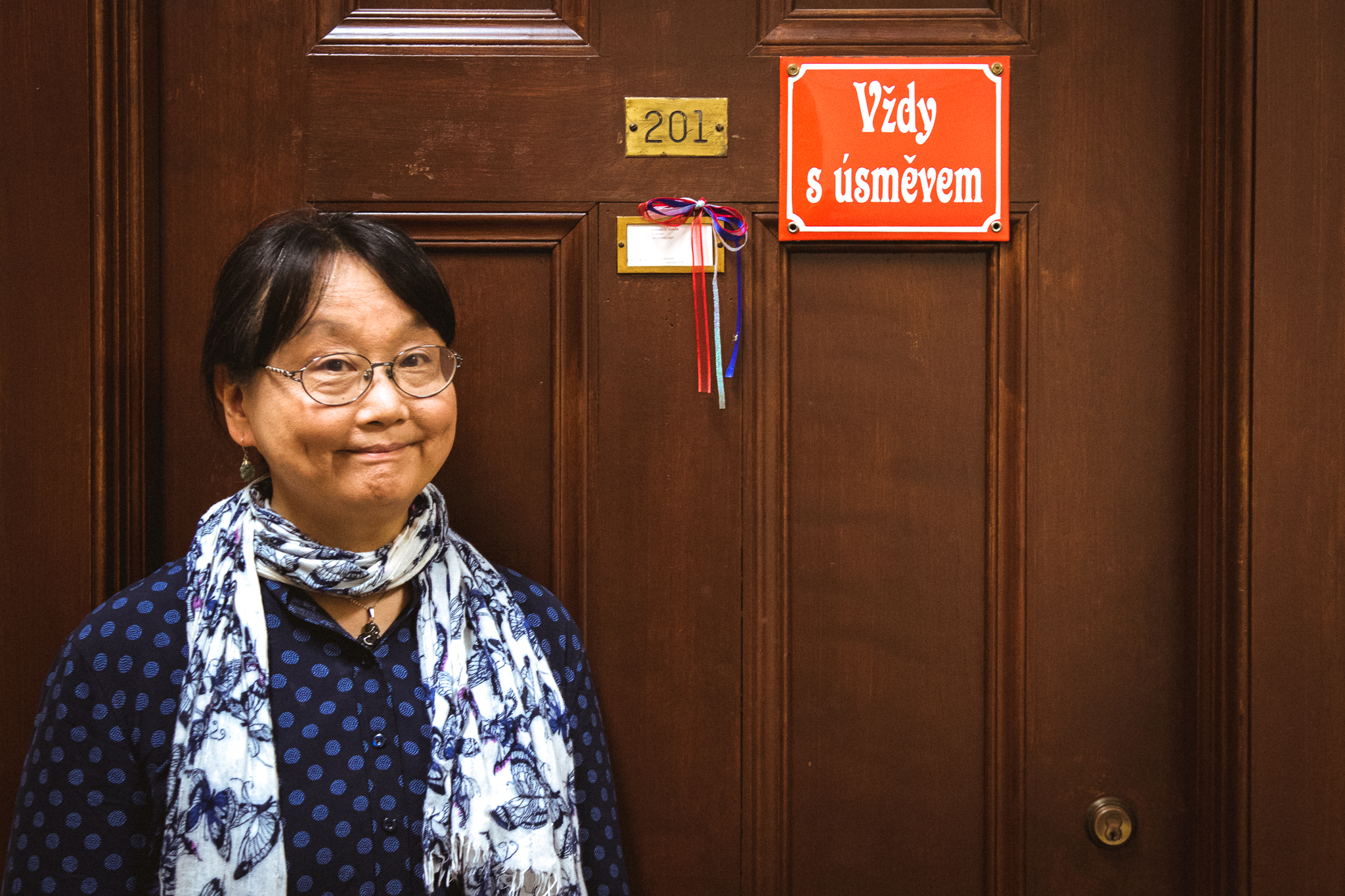 Do you feel like there are differences between teaching in different places?

I think so; I totally enjoy teaching here! I feel like we’re collaborating, and I learn from students. When I taught in Japan [for a year], I taught at a university. It was a language class, but you know how many people were there? 50 students! So how can you teach a language? You can’t really interact with students there. And the students are not really taught to be active. They’re told to obey the authority. It’s stereotypical, but it’s the tendency. It’s really unfortunate.

How would you define good teaching?

I don’t know, I’m still learning, and there’s no end to it. But I discovered that if I’m having fun, then that kind of enthusiasm is infectious, and hopefully students will have fun. And will learn. So that’s what I do. And it’s fun teaching, and I feel right. If I feel right, and I feel convinced, then probably students will be convinced. It’s very simplistic, but I have to say these things are very important to me. Whether or not what I’m teaching is right is another question!

What is a dish that you miss from home?

It’s not a dish; it’s an item. I recently discovered that I can buy it. It’s– do you know natto, fermented soybeans? Not every Japanese likes it, because it’s kind of yucky, and sticky, and so on, but it’s a specialty in the Eastern part of Japan. These fermented beans, I could actually live on. Fermented beans and rice, that’s my thing.

Having lived here for so many years, have you picked up any “Americanisms”?

I think superficial things, like believing in capitalism. Well, I make fun of it. Also, I think some of the issues that I encountered in the Czech Republic—you know, people telling me that my Czech is good, or asking, “How come you’re studying Czech? How come you’re doing research in this?”—in the “American” point of view, are not very normal. Not appropriate. So I actually have to cope with them, because I think I have the [“American”] value in my system already—like I feel they shouldn’t be saying those things.

What are your interests outside of academics?

I have another life: the other life is music. I’m part of three music clubs, mainly made up of music teachers. I would like to play [piano] until I’m incapable of it. When I started piano lessons [as a child], I went in on the first day, and my piano teacher was talking about small hands. I thought she was talking about me. I was completely under the spell that with small hands, I wouldn’t be able to play big things, I wouldn’t be able to pursue music as a career–performance, no. Until I met this teacher in Providence, I wasn’t really comfortable playing octaves. And then when I complained that I couldn’t do certain things to my teacher, it was exactly the same as with Alan Timberlake: she said, “So what? You have two hands. Everybody is different. Everybody has different hands, different shapes, so you just have to kind of deal with it.” And then–it was very psychological–after a while, I felt very comfortable playing the 8th octave. I stretched to 9th, and sometimes I can squeeze to ten.